HHS / CMS / ONC seem to have developed a knack for publishing important documents late on a Friday or immediately before the first day of the HIMSS conference. HHS released its long-awaited Notice of Proposed Rulemaking for interoperability, as required by the 21st Century Cures Act, on Monday morning, although legal experts note that the NPRM was posted online but not in the Federal Register. A few items I noted from a quick skim of the 724-page document:

Text me news, rumors, photos, and booths I should visit this week, then watch for your items to appear anonymously in my daily recaps if I find them interesting.

“The Athenahealth – Elliott deal closed. Some ELT turnover was announced, including Paul Merrild. You should do some asking around about the hospital product, keeping an eye on the LinkedIn profiles of the company’s hospital-oriented employees.” 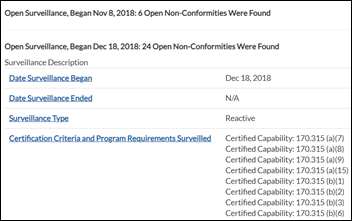 “A Greenway client told me today that Intergy – not only Prime Suite – has 30 broken certification elements. I don’t pretend to understand what’s involved in fixing this list on ONC’s site (scroll down to ‘surveillance activities,’) so maybe it’s being overblown. I am following up with a solid inside source.”

“As the US healthcare continues to struggle with protecting and securing our data, I suggest readers attend HIMSS19 Session 171 to learn real world experience of implement GDPR from two real professionals who have walked the talk, and have the callouses and boot blisters of the journey. I have no conflict of interest, do work for, or have financial interest – I’m just aware of their excellent work.” 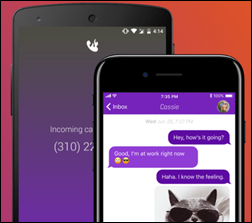 A couple of folks asked me about my burner phone, which actually is an app called Burner rather than a physical phone. It’s easy to set up, slick, and cheap ($4.99 per month, no commitment, unlimited texts and calls). You get a new phone number that you can give out freely since it’s not traceable (no caller ID) and is disposable (apparently it’s good for Craigslist, online dating, signing up for online services that require phone verification, and probably stalking). The texts and calls flow to your phone normally, but through Burner inbound and outbound, so your actual cell number is never exposed and your cell bill shows only your Burner number. Folks who are doing something far more sensitive than I can delete their Burner and all associated records by literally just pressing one on-screen button, which I suppose is a benefit if you anticipate an “FBI, open up” knock at your door. I’m just using it because I ran across it and was intrigued. 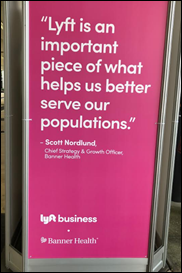 I checked the online HIMSS shuttle schedule while waiting at the designated spot. It suggested using the real-time shuttle location app, which was actually a web page and not an app. Perfect – it said a shuttle would be arriving in one minute. Then the one minute changed to 23 minutes, then to seven, then to six, then to 16 … and by then I had waited quite awhile and gave up and called for a Lyft ride. Unlike the HIMSS bus “app,” Lyft’s was deadly accurate. 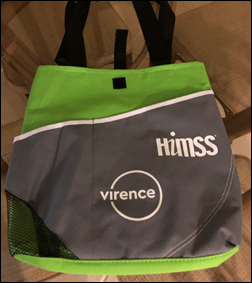 I was anxious to pick up my conference backpack so I could transfer all the junk in my hands and pockets. That didn’t happen – for the first time that I can recall in my long HIMSS conference history, the official HIMSS bag is a actual tote instead of a backpack. It holds a lot less, but more importantly, it can’t be slung over my shoulder, meaning I’ll be spending all week with one hand dedicated to lugging it around. I nearly brought along my travel backpack from home since I didn’t want to be without it for even the few hours of travel (much less for a week), but alas, I made an incorrect assumption that its presence would be, as it has been every year, redundant. Vendors in the exhibit hall, this could be your moment in the sun if you brought giveaway backpacks – let me know and I’ll let everyone know (after first grabbing one for myself, of course).

Tote bag (literally) pick-up didn’t go so well for me today because I couldn’t understand a word of what the person at the desk was saying because of her strong accent. However, I celebrated whatever culture she is or was part of since it’s good reminder that the industry isn’t just white-bread tech geeks and frat boys salespeople any longer (having a clear memory of when it was, and when male nurses and female executives were unheard of). 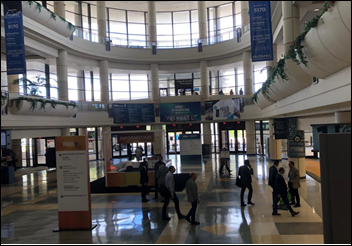 The exhibit hall was like a summer day in Vietnam – swelteringly hot, loud, and dangerous with vehicles (fork lifts and tractors) careening in all directions following no apparent rules and with little regard for pedestrians. The heat levels, caused by having the massive load-in doors opened wide on an 82-degree afternoon, sent me fleeing for the comfort of the air conditioned main halls after just a few minutes watching the pre-game show of geeky IT guys and swaggering equipment operators who were slowly turning the unsightly mess of packing boxes and rolled-up carpet into what you will see tomorrow.

Tomorrow morning will be like Christmas. Vendors will be downing Starbucks in the hall after spending a tiring late night decorating the tree, stacking the presents, and turning on the twinkly lights. We kids will be pacing outside the doors, pressing our noses to the glass and fidgeting impatiently until the doors are flung wide so we can rush in to ooh and aah at the marvel of the tableau that was created just for us. It won’t be long afterward, however (Thursday, to be exact) before everybody will be sick of their new and often broken toys, the pre-holiday euphoria will have transformed into disillusionment, and various family members will have drunk too much spiked Kool-Aid and will have stormed off to their rooms in anger and then scheduled earlier flights home. 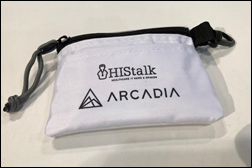 Arcadia has once again put together these invaluable conference first aid kits that you can get from their booth (#2915) or ours (#4085). 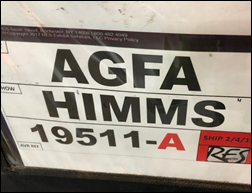 This vendor’s packing crates luckily arrived at the right place despite the spelling error, which I expect to see a few more times this week in locations that are, unlike this one, public-facing. 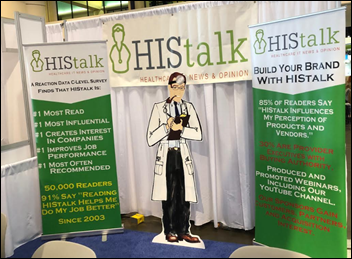 Our magnificent edifice is fully constructed, requiring one Lorre and zero Teamsters to pack it all in from the Lyft drop-off area since it weighs in at maybe 20 pounds total. I’m sure some overnight HIMSS inspector will correct the beneficial mistake in which we have two power outlets (having paid for none), three chairs (having paid for two), and a backdrop that is larger than the carpet (having paid for a 10×10 carpet to cover the same-sized space). I’m not sure that paying $6,000 for a mostly-empty square of concrete that will hold maybe $300 worth of homebrew furnishings makes good fiscal sense, so I will reevaluate in our post-show briefing call, which basically means I’ll ask Lorre if she thinks it was worth it. Her outlook will be more positive if fun people keep stopping by or new sponsors keep signing up.

Special guests in our micro-booth this week (covering Lorre’s necessary intake and output since she’s working solo) will be: 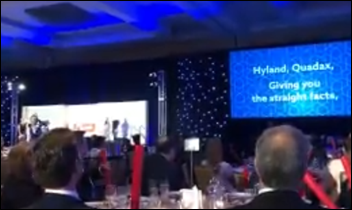 This video posted on Twitter shows KLAS celebrating its winners during HIMSS19. It’s nearly as cringey as that Siemens Healthineers forced merriment video from a couple of years ago, as the suit-wearing stiffs are cajoled by prancing funsters to sing along with the words on the screen (painfully woven to include the names of the winners in the lyrics) and to bang their sticks in appreciation as the script requires. Seriously, KLAS, shouldn’t you keep arm’s length from the vendors you purport to objectively review? Do you suppose Consumer Reports throws sing-a-long parties with car-makers after the April issue comes out? Would CR have lauded Volkswagen as a winner after the feds caught them falsifying their test results? Does everything in healthcare have to involve a party or self-promotional opportunity that might raise the question of WWPT—What Would Patients Think? 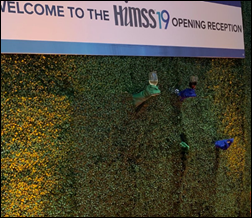 Several folks sent me this odd feature of the opening reception, in which gloved hands protruded from topiary to offer drinks. I would have enjoyed hearing the HIMSS staffer pitching the idea of an alcoholic glory hole, or perhaps hearing the even zanier ideas that didn’t make the cut.