The company announced plans to start paying a quarterly dividend of $0.15 in Q3 2019.

Also in Cerner news, the company will lay off 129 employees at its Augusta, GA office on March 31, according to WARN Act filings. I assume that’s at Augusta University Health, which I believe outsourced IT to Cerner a few years back but seems to be using at least some Epic now. 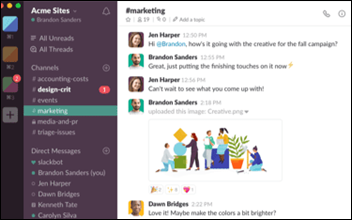 From Slack MF: “Re: Slack. Looks like it’s getting into healthcare.” The CNBC story suggesting that Slack will target the provider market for information sharing is is a stretch, based on the collaboration technology vendor’s security page being updated to say that its product is HIPAA compliant. It’s good practice for general tech vendors, especially those like Slack who are about to IPO, to make sure they meet HIPAA business associate requirements, but that doesn’t mean they will go after that (or any) end user market specifically. Slack is like Salesforce in offering the core technology and leaving most of the industry-specific content to third-party app developers, so I would expect its new HIPAA status to create interest among vendors to use its API to develop new healthcare tools, such as patient messaging and engagement. I wouldn’t expect Slack to suddenly delve into a specific healthcare product and sell it directly, especially as it tries to optimize its first few quarterly reports. A lot of time and energy is being wasted speculating on whether or how Amazon, Google, or other tech giants will invade healthcare instead of just waiting to see what they announce. Meanwhile, if you’re a health IT vendor dealing with PHI and are looking for a pivot or expansion area while riding some big coattails, give Slack’s API specs a look.

From Amish Avenger: “Re: ICD-10. It’s interesting that people can submit ideas for new terms.” An expert says CDC is overwhelmed and thus way behind in reviewing code requests for newly discovered rare diseases, with the ICD-10 codes being important for quantifying each condition’s prevalence and for performing research. The article also notes that ICD-11 is scheduled to take effect on January 1, 2022.

From Talking Dead: “Re: broadcasting from HIMSS19. Who is consuming all of those podcasts, fake TV shows, and audio and video interviews that clog up the exhibit hall aisles?” No one. It’s just a vanity project for the people who produce them. Just because someone lugs video gear around the exhibit hall or perches in front of the lights answering questions doesn’t mean anyone else cares. I recall few times that I’ve even glanced at those videos and no times that I missed anything when I didn’t. I notice that some questionable sites are taking vendor payoffs to do their interviews and gabfests directly in their booths, which should immediately evaporate whatever credibility they had in the first place (think Fyre Festival, and I’m resisting hard saying FHIR Festival).

Expectations were appropriately low for Super Bowl halftime performer Maroon 5 — which has racked up a puzzlingly long yet entirely undistinguished career peddling corporately-crafted drivel like “Moves Like Jagger” — but the bland – er, band – managed to underwhelm anyway. The dull show, which bisected a dull game, sent America to console itself in guacamole and wings. Here’s my too-late, Georgia-focused alternative of some real music: get REM to reunite, maybe with the B52s backing (as long as they don’t play “Shiny Happy People”). My set list: (1) “Texarkana;” (2) “What’s The Frequency, Kenneth?;” (3) “Losing My Religion;” (4) “Man On the Moon;” and (5) the obvious and appropriate closing number, “It’s The End Of The World As We Know It (And I Feel Fine).”

Dann, who started the HIStalk Fan Club on LinkedIn forever ago, tells me it has over 3,700 members. I don’t look at it unless someone’s asking me for a favor, in which case seeing that logo on their profile makes me a lot more likely to help.

Premier Inc. announces Q2 results: revenue up 3 percent, adjusted EPS $0.66 vs. $0.50, beating expectations for both. COO Mike Alkire said in the earnings call that the November acquisition of Stanson Health was highly strategic and its decision support product is selling well, although that business’s revenue is only in the $3-5 million range. 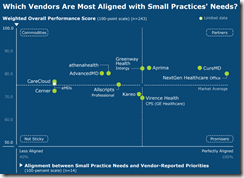 A new KLAS report on EHR/PM systems for practices of 10 or fewer doctors finds that they’re looking for products based on functionality, usability, and support – they don’t care much about about outcomes or technology. NextGen Healthcare, CureMD, and Aprima were the vendors most aligned with those product attributes, while the lower user satisfaction with CareCloud, Cerner, and EMDs may be due to their technology focus.

MedStar Health’s National Center for Human Factors in Healthcare and the American Medical Association launch “See What We Mean,” a campaign for EHR safety and usability. It asks people to sign a letter asking Congress to push ONC to implement the EHR Reporting Program that was mandated in 2016 by the 21st Century Cures Act. 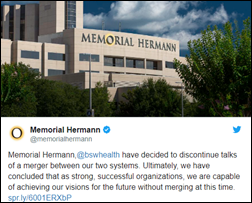 CommonWell announces a Connector program in which health IT vendors can connect to its services through a CommonWell integration member without joining CommonWell themselves. 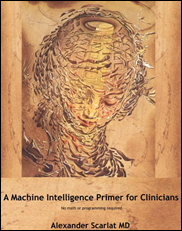 “A Machine Intelligence Primer for Clinicians” by Alexander Scarlat, MD is now available on Amazon. He wrote the 12-part series on HIStalk and he clearly knows his stuff from both a machine learning and MD perspective.

The US Patent Office publishes a 2017 Google patent application for AI-powered software that would use aggregated EHR information collected via FHIR to predict and summarize medical events, sending its findings to individual providers as a patient timeline. The focus seems to be on mining valuable information that would otherwise be lost in the EHR clutter, including a quote, “A wealth information creates a poverty of attention.” I can’t figure out how some sites concluded from the patent application that Google is developing an EHR. 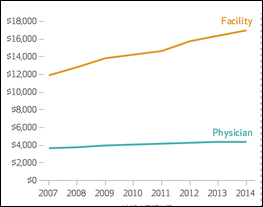 A study published in Health Affairs finds that hospital prices – not those of physicians who bill for services they provide in hospitals – are responsible for driving up healthcare costs, according to the first research to distinguish between the two. Hospital inpatient prices increased 42 percent over eight years. The data came from the Health Care Cost Institute, which made headlines recently when UnitedHealthcare said that it will no longer share its claims information with the organization. 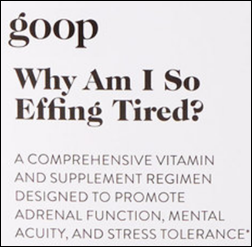 We’ll need a new ICD-10 code for the time doctors spend debunking the dopey and sometimes dangerous health ideas of Gwyneth Paltrow’s Goop, which has bagged a docuseries deal with Netflix from which GP will dispense the “more strategic, bigger stories we want to tell,” presumably to gullible women who trust that Gwyneth’s “lifestyle brand” products (vitamins, sex toys, cookbooks) will help them lead the full lives that have otherwise escaped them. We’re in the public health danger zone when people trust obviously underqualified “experts” or their own “feelings” to decide which parts of proven science they choose to ignore.

Doh! The Super Bowl featured a male Nipplegate, so now we have a HIPPAgate. 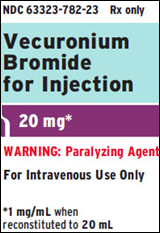 A former nurse of Vanderbilt University Medical Center is indicted for making a medical error in which she injected an elderly patient with the paralyzing agent vecuronium (Norcuron) instead of the ordered sedative midazolam (Versed) that was intended to to overcome the patient’s claustrophobia before having a PET scan. The nurse withdrew the wrong medication from the automated dispensing cabinet after typing in the letters VE for versed, then after not finding the drug’s name, overriding the system to gain access to the vecuronium. The patient was left alone in the scanner for up to 30 minutes where she experienced cardiac arrest and brain death, then died the next day after life support was turned off. The Tennessee Bureau of Investigation charged the nurse with reckless homicide and impaired adult abuse after Vanderbilt fired her. So much for a non-punitive culture that encourages a review of errors to help prevent more instead of coming down hard on a professional who makes a mistake (which is all of them). Having reviewed thousands of medical error reports in hospitals over the years, I guarantee that the “Swiss cheese effect” was in place, where the nurse’s carelessness wasn’t the only procedural irregularity that day. For example, the CMS investigation contains these big red flags that go beyond an incompetent nurse going rogue: 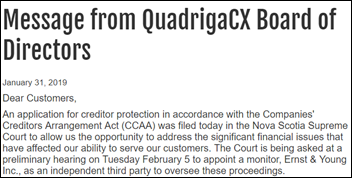 A Canada-based cryptocurrency exchange says its clients will lose their $190 million in holdings after the only person who knew the password to its storage system – the company’s 30-year-old founder – has died. Questions are understandably being raised about whether perhaps his death was faked and he’s off somewhere having fun with the money given that currency-moving transactions have occurred after the account was locked. Not that cryptocurrency attracts scammers or anything.

Super Bowl viewers seemed mostly unimpressed with the all-important commercials, but this one from Microsoft is not only touching and relevant to the company’s business, but it’s also an ode to diversity, inclusiveness, and resilience that the country can certainly use.