I heard an interesting NPR interview with author A.J. Jacobs, who decided to thank every person involved in making his daily cup of coffee. The list is infinite. I think Atul Gawande will find the same. When tracking the costs, the list of cost centers can be daunting because there is a thread leading to more and more areas that are not obvious on the surface. It would be a good exercise nonetheless. (Julie McGovern)

As a young and still-motivated healthcare IT professional, I unfortunately find myself with a debilitating disease which renders me under the title of disabled and under the auspices of Medicare. With fewer and fewer acute care facilities accepting Medicare, I am forced to either go into significant debt by using an out-of-pocket decent facility or physicians or get worse and die relatively soon. Using out of pocket, I’d wreck my credit. Think of me as your sister or mother. Do you want this to happen to them? This madness must stop. After 30 years in the healthcare business, I never dreamed this situation would happen to me. (Recent Medicare Recipient)

For a tight-knit company that still has traumatic flashbacks to its last involuntary layoff of any size, a program like VSP seems like a kinder way to draw out the people who are thinking of retiring or leaving, anyway. A VSP gives you the chance to thank people, throw some going-away parties, and feel okay about offering a cushion for whatever the next stage of life is for people who have served the company for a long time. I know people who have left to care for sick family members, etc., not just retire. Seems like the people who leave were going to leave anyway; it just accelerates the process. (VSP)

Real creators hate the term influencer because it cheapens what they do and the influence is a means to an end, not the end itself. People who consider themselves influencers or promote that idea are generally the wannabes in the first place that ruin it for everyone else. (James Aita)

Apple could have had the long view to dedicate to enterprise healthcare long ago, but they were quarter over quarter focused. Epic had the long view and that has resulted in its current value. “Healthcare” and “health system delivery” are very different, in general interpretation of meaning. Epic dedicated to the system. Apple did not and can’t buy it. This entire week has taught me who the true students of the industry are, with  and the majority just riding the wave with very little true industry experience or foundational knowledge. (Annoyed) 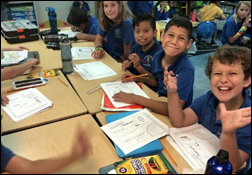 Readers funded the DonorsChoose teacher grant request of Ms. Y, who asked supplies for math and STEM projects for her elementary school class in Florida, which took a direct hit from Hurricane Irma. She reports, “My students need these supplies to make our STEAM classes successful. They love hands on steam projects and it takes lots of resources to really do the projects correctly. Because of the hurricane it has been hard to have the parents support our classroom with the resources we need for the projects, so these items will be very helpful. These items will be enough for many weeks worth of hands-on projects. We appreciate everything that you have done for us.”

We’ve seen this endless times – a big hospital haughtily defends sending a self-pay patient a ridiculous bill and threatening to turn it over to collections, then immediately caves by offering a huge discount once a newspaper highlights its callous behavior. The latest example is Zuckerberg San Francisco General Hospital, which refuses to participate in any private insurance networks for its ED because – as one of its executives explained directly when pressed by a reporter – it needs the excess fees to pay for the less-lucrative care it provides. The hospital slashed a bike patient’s ED bill from $20,000 to $200 once national news outlets ran with the story. Forget bringing a family member or friend as your patient advocate and bring a reporter instead. What’s really galling is that the hospital is still happily screwing over the 99.99 percent of patients who aren’t this guy, and in fact will now dig its hands deeper into patient pockets to cover what it magnanimously wrote off in this single case to buy its way out of the unflattering limelight.

A hospital in England deploys “bouncer” nurses to triage ED arrivals and send those patients who have only minor problems to the pharmacy or private practice to avoid clogging up wait times. The hospital added a smart twist – patients are never sent home, just to other providers.

This story says a lot. Washington, DC’s money-losing Newseum – which emphasizes the importance of the free press – will shut down and sell its building to Johns Hopkins University for $373 million, courtesy of additional  huge donations from Hopkins alumnus and former New York City mayor Michael Bloomberg. In related news, Bloomberg says it’s “ridiculous” that Hopkins doesn’t have its own police force in high-crime Baltimore, so the university is seeking approval to deploy its own armed force. Hopkins suggests that undergraduates budget $54,000 per year for attendance costs. 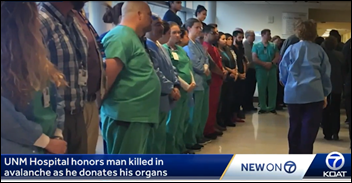 Several hundred University of New Mexico Hospital employees honor a 22-year-old organ donor who was killed in an avalanche, lining the hallways as he is taken for organ harvesting. 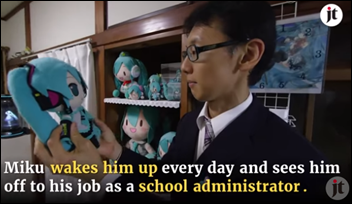 The New York Times describes “robosexuals” or “digisexuals,” necessarily newly coined terms for people who have fallen in love with AI-powered robots. One woman is engaged to a robot she built, while a  man’s formal wedding ceremony featured himself and his holographic bride (that’s the happy couple above, although someone must be a swinger since the shelf is full of other non-humans). Experts say that as in the case of porn, Internet dating, and Snapchat sexting, such relationships will become commonplace and then normal. A $12,000 female sex robot has swappable faces and an AI-powered brain that allows it to carry on conversations, with the inventor noting that lonely customers come home from work to converse with the robot, sometimes over romantic dinners. Lusty entrepreneurs are even opening robotic brothels. The non-creepy aspect of this is that many of the same qualities – conversational ability and even empathy – can be incorporated into robotic caregivers.