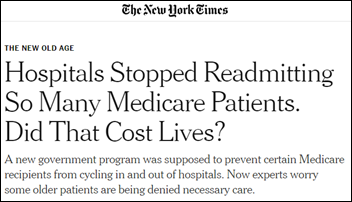 Medicare patient readmissions within 30 days dropped sharply after CMS started penalizing hospitals financially, but the death rate appears to have increased during the same period. That raises questions over whether the lower readmission rate was created by hospitals turning away older patients with a legitimate medical need just to avoid paying penalties.

The 20-percent readmission rate turned sharply down within weeks of the penalty’s implementation (which raises eyebrows of how that happened so quickly), but a Health Affairs study attributes at least half the decline to Medicare’s simultaneous expansion of billing forms to include up to 25 diagnoses instead of the previous nine.

The corrected readmission rate reduction was 1.3 percent, about the same as reported by hospitals that were exempt from the penalties. More patients who had been admitted for heart failure and pneumonia died, however.

From Associate CIO: “Re: Cerner’s voluntary separation program. Cerner still has many overpaid (by KC standards, anyway) associates it inherited with the Siemens acquisition, Brent Shafer has questioned why Cerner has over 400 VPs, and the company has a lot of topped-out associates who have become stagnant after 20-plus years and it needs some new blood to reignite investor interest.” Unverified. My only issue with VSPs is that they target older employees and the volunteers they attract are often the better-credentialed employees who know they can find jobs elsewhere – the lower-demand employees aren’t about to sign up. There’s also the nagging feeling that the executives are second-guessing their own decisions of who to hire and how much to pay, as layoffs are a management failure. Brent as the new guy may have more energy about correcting whatever undesirable situation exists, although I wonder if, as a first-time CEO, he’s worrying too much about impressing investors by applying the easily wielded but blunt headcount scalpel to give the share price a quick goose.

From Coach Ella: “Re: HIMSS. I notice quite a few bloggers are hitting the exhibit hall floor, participating in and promoting speaker sessions as paid by vendors. Is that allowed under conference rules?” Sure. I wouldn’t do it because it’s kind of a cheap sellout to take vendor money for participating in a booth-hosted “education” session of questionable quality, but I don’t begrudge those who do, even though their presence would give me as an attendee yet another reason to steer clear.

From Savoy Special: “Re: Health:Further. Shutting down after its two-year run of putting on a health ‘festival’ in Nashville. They are refocusing on providing advisory services to larger healthcare firms, odd since it was borne out of the Jumpstart Foundry. The format was unique in offering the opportunity to choose any track within a single large meeting room and for offering collaboration space in the middle of the conference room floor. With the growing competition for attendees from well-funded groups like HLTH, CES, and SXSW, which conference will be the next to fold up?” Health:Further (or maybe it’s now Health:NoFurther) announces that it has pulled the plug on its planned August 2019 event, spinning the news with a subhead of “from meeting to acting” in concluding that a once-a-year event can’t keep up with acquisitions and Silicon Valley’s healthcare interest, so it will pivot into an advisory business. It doesn’t make sense to me, especially since I see little evidence of the organization’s street cred for advising bigger and likely better organizations. My advice to attendees – stay home and do the work your employer is paying you to do and quit wasting company time and money screwing around at low-value conferences (which is most of them) looking for easy answers to your organization’s challenges. Imagine how un-innovative Amazon and Google would be if their executives just copied each other based on seeing what everyone else is doing via conference presentations and networking.

From Tip O’Spear: “Re: email newsletters. You should do an HIStalk one.” I’ll pass, for these reasons:

From Robert Lafsky, MD: “Re: NEJM piece on urgent care. A good look from the other side would be a piece by Atul Gawande, where he walks us through a typical day in his surgical practice, accounting for every dollar charged and every dollar collected for every action he takes. The big picture is too big and the problem is at the ground level.” RL references a NEJM piece that I’ll recap below, but in the mean time, this idea is brilliant. I would love to have Atul Gawande describe the downstream effects, especially the financial ones, that emanate like a boat’s wake from his part-time surgery practice. What’s the cost and price of the supplies and drugs that he uses without thinking? How much does he bill and what does insurance actually pay? What’s the hourly cost of running that fully staffed OR? What layers of management are involved in stocking it, cleaning it, scheduling it, and staffing it? How many of his patients experience financial hardship? What documentation is the by-product of a surgical case, how much of that does he input directly, and who benefits? What does he think of competing ambulatory surgery centers? Is he appalled that Partners HealthCare is such an aggressive market bully and pays its executives exorbitantly? (something that he might want to look into on behalf of his new employers).

From DisCerner: “Re: [CIO name omitted], formerly of [a merged health system]. Now the CIO of Banner Health.” Unverified, so I redacted the identifying information and will update if I get confirmation from my media inquiry. UPDATE: Banner Health confirms that Deanna Wise, former EVP/CIO of Dignity Health, has been hired as CIO. She was announced on December 4 as CIO of CommonSpirit Health, the 140-hospital, $30 billion Chicago system being formed by the merger of Dignity Health and Catholic Health Initiatives, but left immediately afterward.

HIStalk readers are smarter and more motivated than industry slackers, so I would be remiss if I failed to take advantage of your expertise by asking you to take three minutes to fill out my once-yearly reader survey. You’ll not only be helping me decide how to spend my HIStalk time over the next year, you’ll be entering yourself into a drawing (which will require me to spend half a day stretching my minimal, rusty Excel skills into writing a randomization formula) for a $50 Amazon gift card.

I erroneously (or at least prematurely) predicted at HIMSS18 that voice assistant add-ons would be all the rage by now, as EHR vendors seemed anxious to trade paint in trying to become the first to voice-power their software Alexa style. I haven’t heard much since from the companies that seemed to be leading the charge – EClinicalWorks, Epic, and Nuance come to mind. I’m curious if anyone is actually using those assistants and what their experience has been. I see that Vanderbilt is presenting at HIMSS19 on its work to voice power Epic.

I’m annoyed at the overused, lame pun of “XXX will see you now,” in which “XXX” is a substitute for “the doctor.” When is the last time, other than on black-and-white TV shows, that someone actually said, “The doctor will see you now?” It reminds me of my early days in a small, rural hospital, in which the office nurses who rounded with our poorly skilled but arrogant community-based medical staff reverentially referred to their employer as “the doctor” as though no others existed. I even heard the wives of those mostly foreign-trained, exclusively male physicians – many of whom treated our nurses like lower-caste handmaidens — refer to hubby in social situations as “the doctor,” although maybe that’s a cultural thing. This particular for-profit hospital had a written policy that employees had to clear a path for incoming doctors in patient room hallways, specifically to hug the wall Parting-of-the-Red-Sea style so that the Doctor (administration capitalized it incorrectly to suck up hoping for more bonus-boosting admissions) could proceed unmolested to wreak patient harm more efficiently and then get back to the office to practice their specialty of defrauding Medicare. That sounds bitter and probably is, but our employees had to intervene nearly constantly to keep doctors from killing our patients through their obvious incompetence. Don’t serve on a hospital’s death committee if you want to preserve your healthcare innocence.

Listening: The Budos Band, a nine-piece instrumental Afro-Soul outfit from New York City that is horns-forward in a 1960s “Iron Butterfly meets Chicago and the Ventures somewhere in Africa” sort of way. I was despondent that I couldn’t get Shazam going in time to ID the song playing in the restaurant I was in, but luckily they were tracking just this band and I was able to get the artist on the next song. Their music would be edgier and more interesting than the usual tinkly piano solos for dinner music.

NantHealth, whose shares have fallen to $0.70, receives a Nasdaq de-listing notice now that the stock has closed at under $1 for 30 consecutive trading days. Companies usually skirt that issue by announcing a reverse stock split, which accomplishes nothing other than to confirm their failure and to allow them to keep investors at the table as they hope for an unlikely miracle. 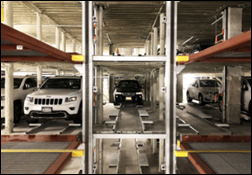 Brilliant: a “high-density parking solutions” vendor opens Manhattan’s largest automated parking system for an unnamed hospital. The robotically operated system provides 119 spaces in a 30,000-square-foot, four-floored structure, squeezing in 30 percent more cars than garages that require space for drivers to maneuver. It looks like valet parking to visitors, but the valet just drops their car off at the automated system’s loading bay. The system is integrated with the hospital’s information system so that customers can summon their cars and pay from computer tablets, allowing them to hop in and leave from the valet desk. The company’s other projects allow human-free operation, where drivers retrieve their car by app. I hate navigating through dark, tight parking garages, nearly always getting stuck behind a clueless visitor who will wait forever for someone to vacate a low-level spot when everybody knows that the entire upper level is surely empty. Pro tip: drive up a couple of levels, then go back down on the other side since few will take the risk of not finding a freshly emptied space there. Pro tip 2: it’s better to park higher if that gets you closer to the elevator since you’ll be walking horizontally, not vertically.

Allscripts offers free genetic testing to its employees via its 2bPrecise subsidiary. Free or not, I wouldn’t want my employer – who likely provides my health insurance and makes cost-benefit decisions about each employee – potentially learning my genetic predispositions. 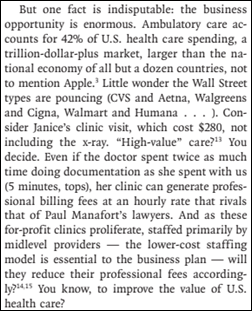 Brendan Reilly, MD pens a cynical yet insightful NEJM recap of his experience taking his wife to an urgent care center in “The Spy Who Came In with a Cold.” His observations, made while keeping mum that he’s a doctor: 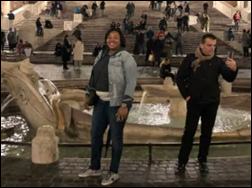 A Virginia woman is sentenced to 15 years in federal prison for scamming $5 million from 50 investors in her phony telemedicine company, spending the proceeds on luxury world travel. She erred in appearing at her sentencing carrying an $1,800 leather portfolio paid for by one of her investors (a special needs teacher and recent widow), with the angry judge ordering her to surrender it since “you’re not going to be able to take it with you to prison anyway.”

Who’s signing up for this? It’s an award-winning solution (or will be when I announce the HISsies winners).