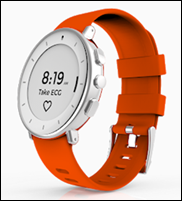 Alphabet’s Verily announces that its Study Watch has earned FDA clearance as a medical device for performing on-demand ECGs.

Verily’s offering, unlike the Apple Watch, requires a prescription, perhaps because it was developed to capture health data from clinical trials participants.

From Stock Picker: “Re: Jim Cramer. What does he know about healthcare?” First, let’s recognize Cramer’s undeniably impressive credentials – Harvard BA and JD, editor-in-chief of the Harvard Crimson, small-town newspaper reporter, successful hedge fund manager (for a short time during a boom market), and co-founder of a stock website, all before he was a TV host. However, it’s always amusing when cheap-seaters (including elected officials) pontificate based on their superficial knowledge. Everybody these days thinks they are an expert on everything they’ve read about from sketchy Internet sources, holding their ground even while emotionally spouting off to an actual expert for whom the topic represents their life’s work. This is a different form of a volume-to-value challenge where loud people talk over more informed ones. 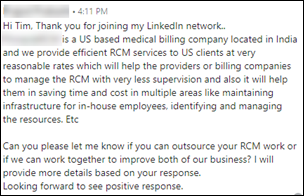 From LinkedOut: “Re: sending an immediate boilerplate sales pitch after connecting on LinkedIn. What if I write a message specific to you and your org? Less annoying?” Only slightly, assuming you are still trying to sell me something. I didn’t join LinkedIn to be pitched, especially by people or companies I’ve never heard of. It also depends on whether you’ve paid any attention to what I actually do, which means that the LinkedIn sales messages I get for software engineering services, cybersecurity consulting, or webinars for non-health IT topics are going to bug me because my profile makes it clear those don’t apply to me. Overzealous Indian dudes in particular seem to love to invade my inbox. It’s like signing up for Match.com and having some weirdo immediately start blasting out full-frontal selfies.

From Deadlock Loser: “Re: Cerner. Did indeed announce another ‘voluntary separation plan’ right after Cliff Illig’s retirement and before the long holiday weekend. Unlike the previous two in 2015 and 2016, this one contained a threat that it would be ‘involuntary’ if certain financial goals aren’t met. Combine this with substandard benefits, readjustment in titles that led to up to 15 percent pay cuts, and blunt communications like this one that kill morale. Executives who are treated like royalty prefer to hire young, know-nothings from local Midwest colleges who are cheap and don’t know any better.” Unverified, but DL included what appears to be a copy of Cerner’s internal announcement from the company’s ironically titled chief people officer, which I’ll excerpt as follows:

Today, we are announcing to all US associates a voluntary offering created for a group of US associates who meet specific eligibility criteria … In 2019, we are expecting to meet a financial goal in order to fund important areas of investment to secure our future as a growth company. If we do not meet our corporate financial goal with the voluntary separation program, we may subsequently conduct an involuntary separation program … An associate may be eligible for the VSP if … the associate has at least 10 years of service and the associate’s combined age and years of service equals or exceeds 65.

From Minimal Shrinkage: “Re: healthcare influencers. When the conference circuit gets into high gear, their insulated conversations among themselves, event promotions, meet-ups, chats, etc. grow exponentially. For every smart, successful, succinct, and cogent healthcare person that contributes to the online discourse, there appear to be 30 others who hold almost no bona fides who produce an endless stream of meaningless, pointless, and self-aggrandized commentary. My grandfather used to tell me, ‘Don’t tell me what you’re going to do, show me what you’ve done.’ Those influencers have also reduced my interest in attending the conferences they infest — I’m not interested in seeing their regurgitated ‘takes’ on stage after not being excited to see them on Twitter and LinkedIn.”

About half of provider IT decision-makers look at either KLAS or Black Book before buying software or services, according to last week’s poll. It’s not really a fair comparison since Black Book covers broad trends with big sample sizes while KLAS digs deep into a specific topic (like population health management technology) while interviewing a small number of actual clients, so they are used somewhat differently. I agree with Former Community CIO on the best way to use KLAS, with this being my experience:

New poll to your right or here: What would you tell Tim Cook if he asked you how Apple should be involved in healthcare?

I invite you to complete my once-yearly reader survey. I have limited ambition, time, and appetite for change just for change’s sake, but nearly everything I do differently today than I did years ago is because I got a spark from someone’s reader survey response. That reminds me that HIStalk will be 16 years old in June, which seems unreasonable given that the initially low readership and conflicting day-job demands should have been strong motivators for me to find another hobby.

I am, as a glass-half-empty curmudgeon, always annoyed by something. My peeve this week, caused by HIMSS19 spam, is people sending an “invite” rather than an “invitation.”Maybe it’s inevitable that verbing nouns (such as “friending,” seeing an Olympian “medal,” or “incentivizing” EHR purchases) will lead to nouning verbs (which along with sending “invites” includes HIMSS listing its federal government “asks.”) It reminds me of nerdy hospital tech guys who worked for me who described their job as “administrating” a system or people (sometimes me included) who say they are “vacationing” given that “vacation” is the noun form of “vacate, ” I say while explanationing.

None scheduled in the coming weeks. Previous webinars are on our YouTube channel. Contact Lorre for information. 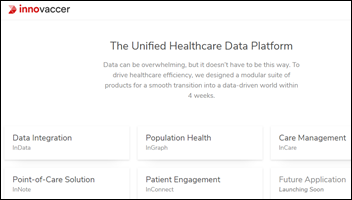 Data analytics and population health technology vendor Innovaccer closes a $35 million Series B funding round, raising its total to $51 million. 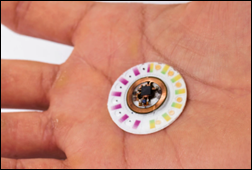 Researchers at Northwestern University develop a wireless, battery-free soft skin patch that analyzes sweat for PH and levels of chloride, glucose, and lactate. Possible applications include detecting dehydration (Gatorade is already on board), testing for cystic fibrosis, and potentially screening diabetics. Researchers are are working on sensors to monitor kidney function, assess post-stroke rehabilitation, and to monitor depression.

The latest twice-yearly health IT market review of Healthcare Growth Partners says that the market is full of noise, as private equity investors are anxiously looking for investments, health IT seems attractive, and the PE firms are using CRM and other digital marketing techniques to indiscriminately blast out messages trying to beat the others at finding deals. Venture capital and growth equity players say their health IT investment strategy meets expectations, while buyout companies are less satisfied. Primary deal-killers are poor business models, deal sourcing, competition from strategic investors, and valuation. Interesting respondent observations:

The VA issues an RFI for a software testing contractor,  with 80 percent of the job focusing on Cerner.

Two patients in Scotland’s Queen Elizabeth University Hospital die from cryptococcal fungal infections that authorities believe originated in the droppings of pigeons that were nesting in a machinery room.

Bizarre: in Scotland, a 28-year-old female hospital nurse is fired and sent to prison for impersonating a rich, male doctor by using photos of handsome men and a voice-changing machine to harass and stalk 10 women she connected with on dating sites. 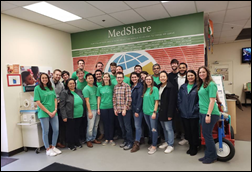