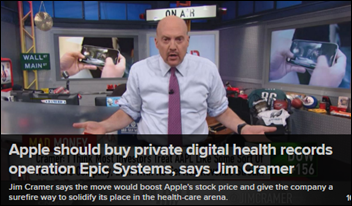 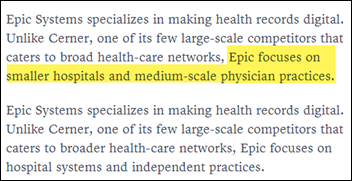 From Dave N: “Re: CNBC’s ‘Mad Money.’ Jim Cramer said he thinks Epic will be acquired or go public, citing Judy’s age.” The stock-picking record of the highly annoying Jim Cramer is poor, underperforming the S&P 500 index funds while exposing investors to more volatility, and this particular recommendation is especially questionable:

From Jelly Doughnut: “Re: population health management. Why isn’t it used more if it really saves money, which it should?” Because it saves money years down the road for someone else when the patient / enrollee has moved on to other insurers and providers. A company spending big dollars today to help a 30-year-old patient get healthy will most likely never see the benefit. We probably need some kind of lifetime patient financial scorecard to fix this, yet another healthcare example in which taking better care of people means making less money. The only real exception is with lifetime insurers such as Medicare and the VA, which get to reap the benefit of whatever savings they create.

From KC1981: “Re: Cerner. Is offering ‘voluntary’ retirement packages and is making it clear that if that doesn’t get to the total numbers needed, the next step is forced retirements and layoffs.” Unverified. I’ll get a call in to Jim Cramer.

From Nicholas Cage-Free Eggs: “Re: HIMSS ‘news’ publications. Down here in Australia, HIMSS dismissed the award-winning contracted editor of its flagship publication after she ran an insightful, critical overview of the problems with the Australian Digital Health Agency, whose CEO is a friend of HIMSS CEO Hal Wolf. That CEO threatened to withdraw sponsorship of the HIMSS AsiaPac conference. Now HIMSS won’t run stories without the agency’s approval.” Unverified, although I’ve heard that before and the editor’s LinkedIn shows that she did indeed leave a few weeks after her story ran. It’s not exactly ProPublica over there – they should have made it clear they weren’t looking for actual news and hired a marketing person instead of a journalist. 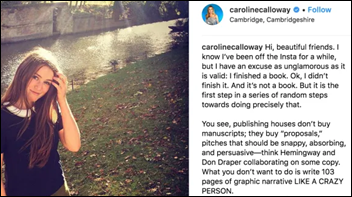 From Acute Malcontent: “Re: social media influencers. There’s something to be said for the HIT crowd that seems to exist only on social media, but meanwhile, I thought you’d get a kick out of this story.” Instagram influencer Caroline Calloway – who in her mid-20s took a $500,000 book advance that she couldn’t pay back when she found out that she can’t actually write – suddenly announces after a two-year hiatus that she’s offering a national “tour” in which she will instruct attendees (at $165 per head) how to create an “Instagram brand.” Twitter roasted her for trying to recruit free helpers, arm-twisting Philadelphia and Boston ticket-holders to travel to New York City instead to make it easier for her, giving attendees packets of flower seeds instead of the promised live orchids to wear in their flowing locks, and letting 20-year-old friends with no work experience run the show. She cancelled the rest of the “tour” and claims in Fyre Festival style that it’s not her fault and she’ll give refunds. Jezebel concludes, “No one is an influencer if everyone is an influencer.” I would add a health IT corollary – you aren’t an influencer, even in its most shallow form, unless you change the behavior (especially the buying kind) of people with real influence. 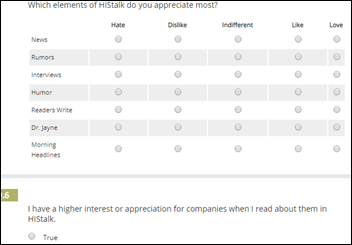 It’s that just-before-HIMSS time when I ask you to take three minutes to fill out my annual reader survey. I use the results for several things – to plan for the year, to manage my ego up or down as needed by reading the positive and negative comments, and to get a mental picture of who is out there on the other side of that blank screen that I vanquish every day.

Dear overzealous sales types – if you connect with me on LinkedIn and immediately spam me with a boilerplate sales message, I will instantly remove the connection, overriding my initial impulse to report you for spamming. I know people told you to Always Be Selling, but that means you are Often Being Annoying and LinkedIn already offers plenty of that.

None scheduled in the coming weeks. Previous webinars are on our YouTube channel. Contact Lorre for information. 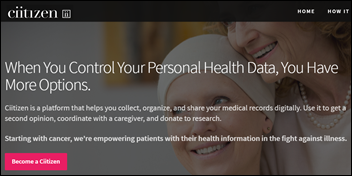 Consumer health data sharing company Ciitizen raises $17 million in a Series A funding round led by Andreessen Horowitz. CEO Anil Sethi founded the company in 2017 after selling a similar company to Apple for its health records business. 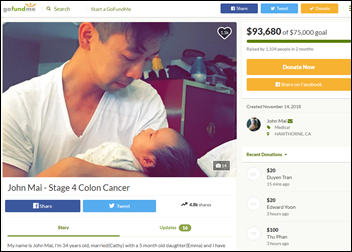 GoFundMe reports that a third of the $5 billion raised on its platform since launching in 2010 has been used for healthcare campaigns. CEO Rob Solomon says he never though the platform’s medical category would become its most popular. “We shouldn’t be the solution to a complex set of systemic problems. They should be solved by the government working properly, and by healthcare companies working with their constituents.”

In Canada, the New Brunswick Department of Health will spend $12.5 million to implement an EHR in three phases over the next several years.

In Ontario, Health Sciences North works to recover from a computer virus discovered Wednesday morning that has affected several IT systems. A “major computer system breakdown” was also reported at Hôpital Notre-Dame Hospital in Ontario, though it’s unclear if the two incidents are related. 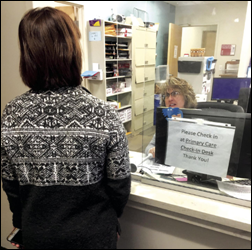 After going live on Epic last month, Memorial Hospital (NH) staff struggle to keep up with prescription refill requests as they transfer prescription data to the new system. The hospital has set up an “urgent refill” hotline and special walk-up window at the hospital for patients. It has also established a hotline for pharmacists having trouble with the system. Interim CEO Lee Myles admits the new system’s “complexity is amazing,” and that employees are working “ridiculous hours” to get refill workflows back to normal. 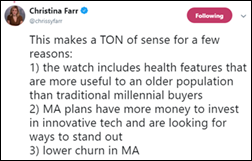 CNBC reports that Apple is talking with three Medicare Advantage plans about offering the AppleWatch to members at a subsidized cost. The $400 latest version of the Watch features senior-friendly fall detection. Skeptics have pointed out that more evidence is needed to determine the device’s impact on outcomes, and that seniors may have a hard time manipulating and reading the device’s small controls and display.

Medtronic develops an app that, for the first time, gives users of its pacemakers the ability to pull data from their own devices. 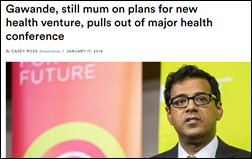 Atul Gawande, MD cancels his keynote at HIMSS19, which isn’t surprising given his media hiatus since becoming CEO six months ago of the joint venture between Amazon, JPMorgan, and Berkshire Hathaway. Maybe he’ll spend the time he’ll save naming the darned thing. Meanwhile, HIMSS announces that HHS Secretary Alex Azar will join CMS Administrator Seema Verma in a Tuesday evening session on interoperability and patient engagement that, based on their Twitter track records, will turn into a political rally.

A 17-year-old teenager in China who sold a kidney to black marketers for $3,000 in 2012 so he could afford to buy an IPhone 4 and IPad 2 is now a 25-year-old man who will be bedridden and on dialysis for life after his remaining kidney failed due to poor technique in the illegal surgery. Five people, including two moonlighting surgeons, went to jail and Mr. Wang was awarded $300,000 in compensation. It’s probably not this Mr. Wang.