Maj. Gen. Payne says “I want to give you a transparent review of where we are with MHS GENESIS” and then doesn’t. Unless maybe the author of the article left out parts like “it doesn’t work yet,” or “it failed its only assessment so far” or “it has zero interoperability with community providers.” It’s one thing to not see a train wreck coming, but another to have it wreck at your feet and disavow it. (Vaporware?)

Did everyone forget about the Tata case? I understand Epic (or any other vendor) wanting to protect their intellectual property. (UGM Attendee)

But this [health system selling Epic Community Connect that refuses to participate in an HIE] would not be the vendor. It’s the hospital itself that’s trying to absorb / acquire / whatever the neighboring clinicians. Epic has nothing to do with it other than being the hospital’s EHR. It’d be the same situation if it was Cerner I assume. My guess is the ONC will put out a proposal that tackles something that isn’t actually an issue. (Epic Complainer)

My patience and sympathy for gripes concerning no-shows is sharply limited. OK, yeah, it’s socially poor form and it has economic and medical consequences. Yet when those same providers are asked to explain, justify, or even quantify wait times, they cannot. Or will not. Or we receive a long list of excuses as to why the poor on-time performance of clinicians exists. With no solutions offered, not ever. Can anyone say they have not waited in a reception room, for an appointment that didn’t start on time? Often by an hour or more? (Brian Too)

The Allscripts 2bprecise product was built on NantHealth’s Geonomics product, which they obtained after investing $200 million into NantHealth, only to lose nearly all of it when that division failed and was the focal point of possible legal issues. Any word on how many sites implement and use this 2bprecise product / service? (Dr. JVan)

The screenshot issue is ironic. As I recall, around 2000, Epic settled (for millions $$) a lawsuit that IDX had filed against them which stated Epic had stolen screenshots and documents from the UW Medical foundation.(HISJunkie)

As for Epic moving into tangent markets for LTC, mental health, etc. it will be very interesting to see how they go about this. Develop or buy? Considering that there are many successful vendors that own these markets, they sure do not have the time to develop, so will they break down and buy? Secondly I think that the sales argument that the organization will want to buy from a single vendor will not carry as much weight as it did selling within the hospital. (HISJunkie)

Epic doesn’t have an IP leg to stand on for the screenshot restriction, but I believe they started putting this into their contracts a while back that the organization wouldn’t allow it from their employees, and it probably hits their “good install” metrics if they do. (DrM) 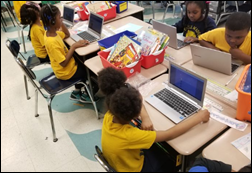 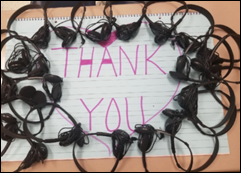 Reader donations funded the DonorsChoose teacher grant request of Ms. B, who asked for 30 sets of headphones for her second grade class. She reports, “When my class received our box of goodies, we opened it together and they were so happy to have new headphones. Our old headphones were taped or broken from the usage due to the prior years of teaching. We also had to borrow from other classrooms in order to have a class set. Through your donation, my students have an opportunity to build their educational skills in all areas of learning. Working during technology time as a whole has enhanced reading comprehension, math, and vocabulary development by providing them comfort as they work in their own personal space. Receiving their personal headsets has opened up a whole new world.”

Facebook employees liken their work environment to a cult, in which they are forced to pretend to love their jobs, keep quiet about the company’s many scandals, and to form fake friendships with co-workers to game the company’s peer review system that encourages employees to submit anonymous, unchallenged feedback to the employee or their manager.

A jury awards $14 million to parents in a lawsuit brought against a hospital and a radiologist in a “wrongful birth” case in which they were not warned that an ultrasound image of their 22-week fetus showed possible abnormalities that might have convinced them to terminate the pregnancy. 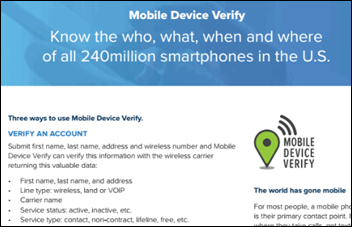 Cell phone providers are selling the real-time location data of their customers, creating a gray market for “bounty hunters” who can locate any cell phone to within a few hundred yards. Companies are selling the data that is intended to be used for fraud detection and roadside assistance firms  – in violation of the privacy policies of the cell phone providers — to developers of apps for car salespeople and bail bondsmen.

A urologist removes a patient’s healthy kidney at UMass Memorial Medical Center after pulling up the wrong CT scan by looking up his patient by name alone, which displayed the images of a different patient with the same name who had the same kidney scan performed on the same day. 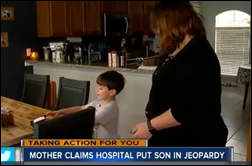 The mother of a five-year-old boy whose diabetes is continuously monitored complains that she called Johns Hopkins All Children’s Hospital (FL) to report a high reading, but doctors didn’t call her back for three days. The hospital’s endocrinology department says they will start returning the calls of diabetic patients within 24 hours.

A Qualcomm executive’s keynote at the Consumer Electronics Show is interrupted by his unmuted Alexa device, which demonstrated an uncanny use of AI (during his pitch for using AI in cars) by loudly proclaiming, “No, that’s not true.”