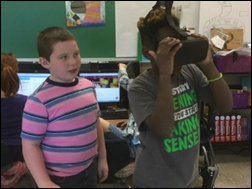 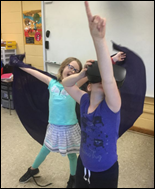 Readers funded the DonorsChoose teacher grant request of Ms. B from Virginia, who asked for five sets of virtual reality headsets for her high school classroom and for her projects as an instructional specialist (she based her program on STEM integration classes she’s taking through Columbia University and NASA). She provides this update:

I truly apologize for the delay in writing my thank you note, but, there is a reason, a very good reason! Google Expeditions came to our school to launch their newest VR experience and I and my students were a part of the LAUNCH! The pictures included do NOT do justice the the excitement of the day. Imagine third grade students walking around the Coliseum and remarking at all of the archwork, or flying around a Roman ship and realizing how large the galleys had to be! And then being surrounded by bees as they became a flower or as they moved from room to room with the astronauts in the International Space Station. Thank you for helping make this possible!

Anonymous Epic Developer’s donation, when matched with funds from my anonymous vendor executive and other sources, fully funded these teacher grant requests:

An orthopedist raises concerns about “selfie wrist,” a form of carpal tunnel syndrome caused by the wrist rotation of people who take endless mugging phone photos of themselves. I expect the next selfie-induced health crisis to be: (a) women whose lips go permanently numb after too many self-adoring kiss poses for photos; (b) Asians who throw their elbows out making that horizontal V-for-victory thing while preening in front of a scenic backdrop; or (c) tendonitis precipitated by women taking point-of-view photos of their feet from beach chairs pointed at the ocean.

California’s Medi-Cal Medicaid program is investigating private equity-owned Agilon Health, which was subcontracted to coordinate care but reportedly intentionally delayed or denied services purely because of cost. SynerMed, another contractor, was found to have placed patients in danger by denying services and falsifying documents to hide it. Agilon’s own reports show that nurses had to review up to 200 care requests per day and their decisions were reviewed only by a private practice family doctor who checked in during breaks from his own medical practice. 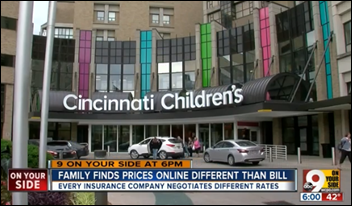 Everybody’s likely to be confused at or angered by hospital-posted list prices, so here’s an early example – the father of a seven-year-old whose broken arm was treated at the outpatient clinic of Cincinnati Children’s Hospital Medical Center – sent there by the ED to save him money – finds that based on the just-posted price list, his $2,000 bill included being charged at the highest ED rate. He also notes that he was charged more for an X-ray than the price list says and was billed for surgery for just having a cast applied by a technician. The hospital responded that nobody pays list prices and bills include facility fees that aren’t part of the item charge. A Louisville TV station notes that two hospitals that are next door to each other have CDM prices of $162,000 and $55,000, respectively, for the same prostate cancer drug. 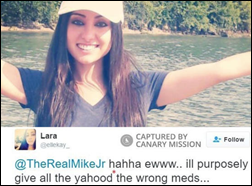 Cleveland Clinic fires first-year medical resident Lara Kollab, DO, who used her social media accounts to call for violence against Jews and to threaten that she would intentionally give Jewish patients the wrong medications. She graduated from the obviously appalled Touro College of Osteopathic Medicine, which is ironically part of a system that was created to serve Jewish students.

Humans – not particularly bright ones – rise up against the machine (and presumably the potential loss of unskilled jobs) by attacking self-driving test cars in Arizona. Yokels are slashing test car tires, throwing rocks at them, trying to run them off the road or stopping sharply hoping to get rear-ended, screaming at them to get out of their neighborhoods, and waving guns at them. Experts say people are reacting to driverless cars as “robotic incarnations of scabs” and expressing hostility toward big corporations like Waymo owner Alphabet that are furthering their own interests by running beta tests without approval. The companies generally always decline to file charges even when the offender is identified or confesses.