MModal’s transcription, scribing, and coding services are not part of the deal. 3M will remain an MModal partner in that business, which generates $200 million in annual revenue.

The sale is just under the entire price paid for MModal by private equity firm One Equity Partners – JP Morgan Chase’s private equity arm — in 2012. The vendor filed for Chapter 11 bankruptcy in 2014, reporting assets of $626 million and liabilities of $852 million along with declining sales, but emerged from Chapter 11 later the same year.

3M will bring over 750 Pittsburgh-based employees of MModal.

From CMIO: “Re: Greenway Health. Our salesperson told me that development of Prime Suite is ending other than for compliance issues. He is telling customers to move to a different EHR. It apparently has something to do with the MIPS issues you reported they are having.” Not true, according to Greenway, which provided this response:

We are actively communicating with our customers regarding MIPS reporting capabilities. It is important to note that Greenway Health is not ending development for Prime Suite and is not forcing customers to move to another EHR. Customers can remain on Prime Suite and take advantage of future upgrades, as well as consider other Greenway solutions and services that drive practice success. We are continuously partnering with our customers to determine the path forward that best meets their needs.

GE shares rise on the news that the struggling company will continue with plans to spin off its healthcare business through an IPO that will likely take place next year. 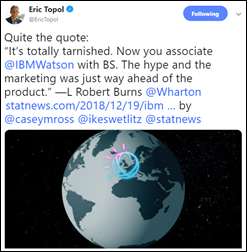 A paywalled piece in STAT looks at the shaky ground IBM Watson is experiencing in several hospitals in China. The company announced in 2016 that 21 facilities would adopt the cognitive computing technology for oncology as part of a multi-year arrangement with Hangzhou CognitiveCare.

Tabula Rasa HealthCare names Kevin Boesen, PharmD (formerly CEO of $131 million Tabula Rasa acquisition SinfoníaRx) as chief sales officer. Boesen, who studied improv at Second City in Chicago, launched a popular skit-based video series with his brother about the pharmacy profession while both were professors at the University of Arizona. 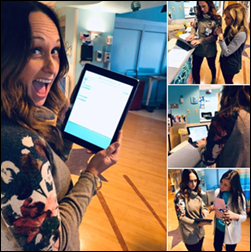 Geisinger (PA) adds ProviderMatch for Consumers from Kyruus to its website, giving patients the ability to find best-fit physicians and schedule appointments.

Carefluence announces GA of its FHIR-enabled server and tools on AWS.

Walgreens pharmacies and Verily will work together to develop solutions for patients with chronic conditions, initially focusing on medication management and a virtual solution for type 2 diabetes patients.

The VA is considering terminating its $624 million Epic-Leidos patient scheduling system pilot project and buying a similar system from Cerner.

CMS issues an RFI asking for feedback on whether or not the consulting practices of hospital accreditation agencies like The Joint Commission pose a conflict of interest. 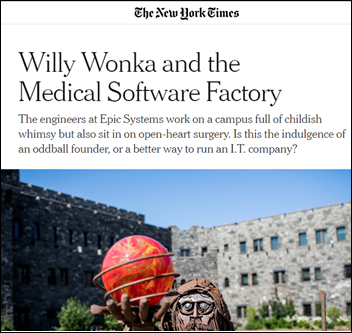 The New York Times visits Epic with these observations (and some great campus photos):

A Forbes expose on London-based videoconferencing app vendor Babylon Health finds that despite having raised $85 million and convinced NHS to eventually use its chatbot-powered consumer diagnostic app, the latter software wasn’t tested anywhere else and didn’t work. The article notes:

Chipotle started requiring employees to sign arbitration agreements as a condition of employment in 2014, a practice affirmed as legal by a Supreme Court case involving Epic. Now Chipotle is being overwhelmed by the number of pay-related arbitration cases that have been brought against it by former employees – each involving a cost of $30,000 to $50,000 – and has tried to convince a judge to stop accepting the filings. He said no. Chipotle hasn’t been paying its share of the arbitration filing fee and is fretting that each case must be heard in the individual county in which the employee worked (and Chipotle has 2,400 locations all over the country).