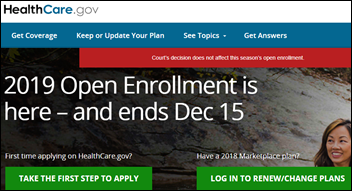 A federal judge in Texas rules that the Affordable Care Act is unconstitutional because Congress eliminated the penalty for people who don’t sign up for health insurance. He sided with the White House-supported lawsuit brought by 20 Republican state attorneys general, which argued that if the penalty is unconstitutional, then so is the entire ACA.

The Trump administration filed a brief asking the court to overturn the ACA’s ban on preexisting conditions, opening the door for insurers to once again price coverage based on medical history. The White House also opted not to defend the ACA in court, an unusual move for the executive branch that traditionally defends existing laws.

The ruling did not include an injunction, however, so nothing will change until higher courts review the ruling. The ACA has survived several more credible legal threats.

From Smitten: “Re: fax machines. It’s about time hospitals were dragged kicking and screaming into the 21st century.” I shall allow Calvin and Hobbes to respond.

From Sure Winner: “Re: Jonathan Bush’s comments. It makes you contemplate whether today’s ‘what have you done for me lately’ investment environment is capable of driving long-term economic growth versus short-term profits and churn. Investors don’t care about mission and long-term vision. We see the same problem in the VC startup funding space. I question whether there is even a place for publicly traded companies in a field like healthcare that should be steered by a higher moral compass.” The problem with taking investment money (including going public) is that your #1 customer is now fickle shareholders, and whatever business you thought you were in becomes secondary to making good-looking numbers each and every quarter. You can maintain some degree of control if you resist taking too much money early and thus can set a long-term trajectory that is clearly good for everyone, but as in Athenahealth’s case, you can ignore individual investors only to the point they own enough shares to bully the board (and Athena’s board showed zero backbone in jettisoning Bush on non-news and character assassination planted by the activist investor turned eventual participant in the acquisition). As for healthcare, the moral compass is now permanently subservient to the quest for the dollar even in non-profits, although the private equity purchase of nursing homes, medical practices, and hospitals is a particularly troublesome development that could happen only in a screwed-up healthcare country like ours. It’s a slippery slope once you declare healthcare to be a business as happened in the 1960s with the rollout of Medicare, when hospital patients become a MBA-managed production widget and healthcare became known for massive costs, poor outcomes, impressive buildings, and economy-leading employment. The venture capitalist will see you now.

From Indigo Bunting: “Re: patient wayfinding solutions. Can anyone share insight about how vendors such as Jibestream, Logic Junction, and Gozio Health have fared? I’m interested in deployments, usage, and sustainability. Did Mayo Clinic ever commercialize their in-house solution?”

From Tuner Fish: “Re: holiday music. Your nomination for worst?” It’s a toss-up between the wretched Paul McCartney froth of “Simply Having a Wonderful Christmas Time” (his post-Beatles work is mostly awful without Lennon around to temper his sappy pop tendencies) and the oddly titled “Christmas Time is Here,” which is my own “Gloomy Sunday” in throwing me into melancholy. No pop artist in their right mind wants to put any effort into making a Christmas album (especially of classic covers) knowing that the songs will be ignored for 11 months of each year (if not permanently) and will then be strung together into a bizarre playlist of novelty tunes and ancient chestnuts whose only commonality is December 25. In fact, some popular songs have no Christmas references at all – “Jingle Bells”, “Let It Snow,” “My Favorite Things” (playing now as I write this), and the suddenly unacceptable (after 75 years) “Baby It’s Cold Outside.” Our holiday music is like that neighbor whose unrestrained Christmas joy compels him to litter his already-littered yard with unrelated inflatables ranging from Baby Jesus to Santa Claus to Mickey Mouse and even Homer Simpson, a grotesque tableau I heard described on the radio this week as “like Walmart puking on your lawn.” 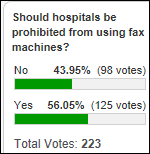 Just over half of poll respondents think that the US should follow England’s lead in banning fax machines in hospitals. GZ says a ban isn’t necessary and faxing is a good backup to more modern options. Brian Ahier thinks CMS should lead the movement and stop requiring clinicians to fax information to it, while Edward Hobbs agrees that Medicare and Medicaid are among the worst offenders in requiring either mailed  paper copies or fax. Frank Poggio notes that it’s not just healthcare – other industries require the barely-better option of printing, signing, scanning, and emailing PDFs instead of using electronic signature. Dr. Rick blames fax usage on poor EHR design. RobLS says OCR should crack down on insecure PHI transmission. Crying Fowl believes doctors should be required to use secure electronic communication as a condition of licensure and notes that referral information often comes from non-providers such as schools that don’t have fax alternatives, although he or she advocates outlawing faxes from pharmacies in states that have mandatory e-prescribing.

New poll to your right or here: Which ways have you used in the past year to communicate with your PCP? I came up with quite a few choices, but I’m sure I still missed some (though I omitted telephone calls intentionally).

I saw a hospital’s entry into my RFI Blaster for requesting consulting engagement information from several HIStalk sponsors, which reminds me to remind you that it exists. Fill out the simple form and send your RFI to one or several companies in a couple of minutes. 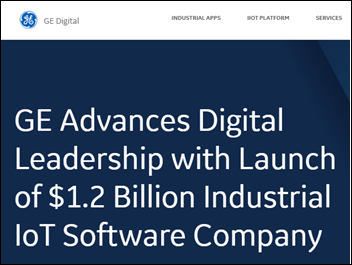 GE is frantically trying to undo the Jeff Immelt-caused damage that just about tanked the whole enterprise (and may still do so), with this as the latest redo – the company will try to create a separate business from the dregs of GE Digital, the company’s failed attempt to remake itself into a software vendor focusing on Internet of Things automation of manufacturing. GE Digital CEO William Ruh will leave the company and GE CEO Larry Culp predicts that the spun-off business will perform better in not being managed by GE, which says all you need to know about GE (despite GE’s self-admiration for cranking out great managers, Culp’s an outsider, having made hundreds of millions running a medical device company). GE shares have bled 60 percent of their value in the past year, now priced about the same as they were in 1992.

It’s exhausting trying to keep up with what Amazon may or may not do in healthcare. CNBC reports that the company considered moving into home health testing via a potential acquisition of Boston-based Confer Health that never occurred. Confer, whose technology hasn’t yet been approved by the FDA, was founded by a Harvard PhD neuroscientist and the obligatory computer guy (and online ad technology developer) who has recently moved on to become a product manager for my favorite online furniture store Wayfair.

A Waystar survey finds that two-thirds of Americans are challenged in at least one category of social determinants of health and most of them don’t talk to their doctors or insurers about it. 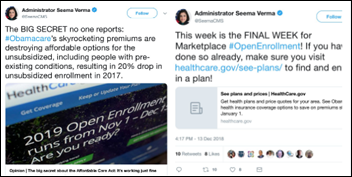 Politico’s Dan Diamond contrasts the suddenly apolitical ACA-related tweets of CMS Administrator Seema Verma (last year vs. this year above) as Open Enrollment wound down this weekend and an HHS transparency investigation by House Democrats looms. 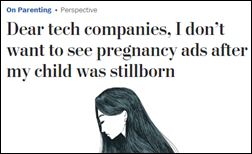 A woman who announced her pregnancy on social media, clicked on Facebook maternity-wear ads, created a baby registry on Amazon, and tagged Instagram photos with #babybump complains that she was served up targeted baby-related ads after her child was stillborn. Instead of questioning why she needed to share her personal information on ad-targeting sites that make it clear that they use it for deliberate intrusion, she says those sites should have used the same technology to infer her loss from her postings and then suppressed the ads. She also blamed Facebook for not providing an option to turn off parenting ads, although it offers exactly that deep in some menu. 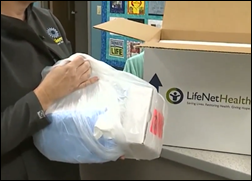 Weird News Andy says Southwest Airlines must have a heart beyond the one in its logo. A SWA flight bound for Dallas returns to Seattle when the airline realizes that a “life-critical cargo shipment” (a human heart) was inadvertently left on the plane instead of being delivered to a local tissue bank. The re-routing allowed the heart to reach its destination before it would have been unusable. I was curious about the tissue bank, LifeNet Health — it reported 2016 revenue of $353 million and paid its CEO $1.4 million. It’s fascinating to see the healthcare niches that are exploited by multi-million dollar businesses. 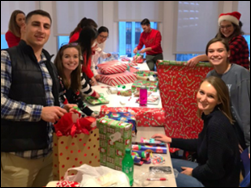