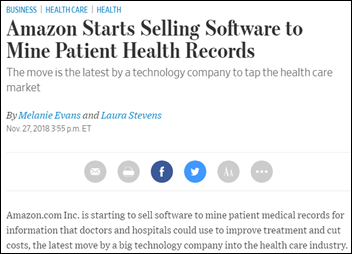 Amazon will announce this week launch of a software product for insurance companies that mines electronic patient records, including both structured and unstructured data. It will look for incorrect coding or diagnoses to improve quality and lower cost.

From TaTa Toothy: “Re: Key Dental Group. The practice’s EHR vendor locks it out of its patient database after the practice drops its system.” Key Dental Group (FL) says dental software vendor MOGO is refusing to return its 4,000 patient records following termination of its license. The practice put out a press release titled “HIPAA Security Incident” that warns patients that it has no control over how their data will be protected by the vendor. MOGO’s LinkedIn says the product is “HIPPA-compliant.”

From DiJourno: “Re: fake health IT news. Running all positive stories is a clue.” You can easily recognize advertiser-friendly “news” sites by simply checking their 10 most recent stories to see if they wrote anything negative, especially about an advertiser. I explain when people ask why I’m so cynical that: (a) the frontlines health IT view is a far cry from profit-motivated irrational exuberance supported by vendor-friendly news sites; and (b) fluff written by armchair quarterbacks is in ample supply and thus the obvious need is to inject reality. I grade sites this way: (a) can I immediately use what I just read; (b) did I learn something I wouldn’t have found elsewhere; (c) can I at least paraphrase a given story in casual conversation to sound smart? Otherwise, I have  more entertaining ways to waste my time. 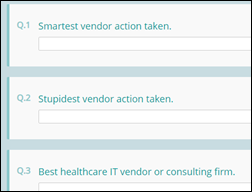 The earlier-than-usual start of HIMSS19 means it’s time to open up the HISsies nominations, my version of the political primaries. I’ve unsuccessfully hoped every year since the first HISsies in 2008 to avoid dozens of email exchanges like these: 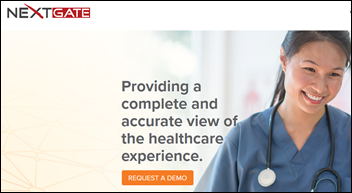 Former University of Utah health system CEO Vivian Lee, MD, PhD, MBA, who resigned after clashing with the university’s cancer hospital leadership, joins Verily as president of health platforms. She will oversee products related to health system improvement and population health. She finished her contract with the university as a radiology professor at a salary of $1 million per year.

HIMSS announces its 2019 “Most Influential Women in Health IT” winners:

The GAO will investigate rumored VA meddling by three political supporters of President Trump who said they “were anointed by the President” as private citizens. The three, including concierge doctor Bruce Moskowitz, say they voluntarily offered their help to the VA but were given no authority over the VA’s decisions. The initial ProPublica investigation found that Moskowitz’s negative experience with Cerner led the group to urge then-VA Secretary David Shulkin to perform more due diligence before giving Cerner a $10 billion, no-bid contract. Former officials say Shulkin was fired because of friction with the group over the Cerner contract.

BCBS of North Carolina emails a medical claims report for 158 employees of Wilmington, NC to the wrong city.

Systems of two OH and WV hospitals remain down following a ransomware attack Friday, with their EDs remaining on partial diversion.

A Black Book survey finds that the CIO’s strategic role has diminished as non-IT department leaders are making more purchasing decisions. It questions whether the “chief” part of the CIO title is at risk as only 21 percent of CIOs say they are involved in innovation projects and departmental purchasing decisions, with 29 percent viewing their role as tactical. Nearly all C-suite colleagues view CIOs as technology providers and order-takers who don’t need to be involved in transformation and innovation efforts. The report finds that average CIO tenure is down to 3.2 years. 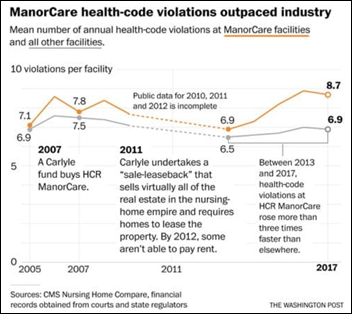 The Washington Post finds that a private equity firm’s acquisition of a national nursing home chain led to dramatically decreased quality of care as the chain was loaded up with debt; cash was extracted to pay investors and PE firm management fees; buildings were sold and leased back at unreasonable rents to free up cash that the private equity company extracted; and employees were laid off as the nursing homes were unable to pay the new debt and rent costs. A company consultant said the bankers and investment people who run the PE firm “did not know a thing about this business at all.” The PE firm says things were going fine until Medicare reduced payments. The PE firm has sold the chain to a non-profit, but the question remains – are the slash-and-burn, flip-focused private equity methods appropriate in healthcare?

I found this “Black Friday for Healthcare”article by Loyale Healthcare CEO Kevin Fleming both interesting and timely. He says:

Employees at Mercy South (MO) were scheduled to protest Tuesday after the hospital required employees to receive a flu shot unless they offer medical or religious reasons.

Former Chicago Bears coach Mike Ditka is released from the hospital after being treated for a mild heart attack. Above is the mental picture I immediately conjured given that it’s Thanksgiving and RSNA.