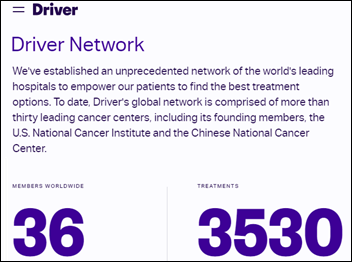 Driver, whose technology matches cancer patients with clinical trials, runs out of cash and shuts down just two months after its high-profile launch.

The company had 85 employees and 30 cancer centers participating, but its revenue model was to charge patients $3,000 upfront plus a monthly fee to be matched with studies (lesson learned – never base your revenue projections on what healthcare consumers are willing or able to pay unless your product involves recreational drugs, vanity surgery, or sex).

The company says it will try to help its few paying customers transition smoothly, but cautions that it doesn’t have the money to issue refunds. 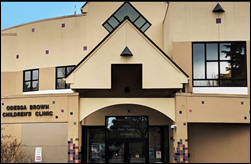 From Randy: “Re: the $20 million donation to Seattle Children’s from former Microsoft CEO Steve Ballmer. I generally agree with the sentiment about big donations to hospitals instead of public health, but the Ballmer gift is to the Odessa Brown Children’s Clinic, which serves the historically underserved, African-American neighborhood in Seattle. They will use it to locate a second facility near the light rail station so that the families of patients who are displaced by Seattle housing prices can still access the clinic’s services.” I saw that and it’s indeed a good cause, although Seattle Children’s makes enough profit that they should have been able to do the right thing without waiting for Ballmer’s donation. Still, I recognize that hospitals – including whose that have employed me – never seemed to be able to get anything done without borrowing more money (probably because they were always erecting or buying new buildings), so perhaps the donation avoided that.

From BH: “Re: breach. [vendor name omitted] contacted one of our partner hospitals to inform them that an employee of the company had their credentials compromised, and that those compromised credentials may have accessed their servers. Not sure yet what products or product lines were affected, but the company that received this notice is a hospital that uses multiple products. I have not yet seen any public statement about this activity or any breach notifications” Unverified, so I’ve left the company name off for now. Forward the email to me, please.

Thoughts on the acquisition of Athenahealth by Veritas Capital: 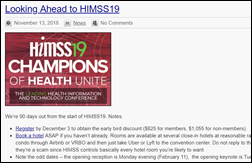 HIMSS19 starts in 90 days, so I threw down a few thoughts. 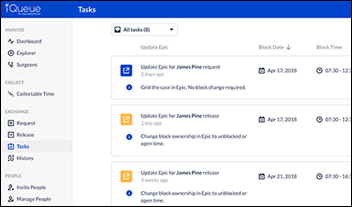 Smart scheduling and throughput technology vendor LeanTaaS raises $15 million in a Series C funding round, increasing its total to $39 million. 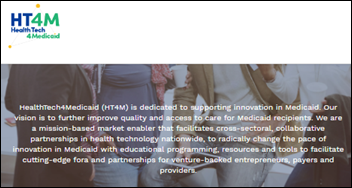 Several health IT startup CEOs form HealthTech4Medicaid, which will advocate for Medicaid’s use of technology (with special emphasis on the ones its members sell). I’ve heard of only a handful of the 40+ companies whose CEOs are involved.

Business Insider fawns over a former exec of Facebook and Google whose company is working on continuous, wearable imaging devices that it hopes to sell in drugstores in competing with MRIs. It’s an interesting idea with a lot of potential pitfalls along the way (such as the FDA’s approval), but the real problem is that investors, startups, and consumers obsess over new diagnostic tools that can create false positives (requiring clinician time and possibly causing harm as the patient gets roped into the healthcare widget factory). We have many problems with US healthcare, but misdiagnosis and under-diagnosis aren’t anywhere near the biggest ones other than to investors looking to make mint.

The best reporter in the business, CNBC’s Chrissy Farr, reports that Alphabet will move its London-based DeepMind healthcare AI subsidiary under the newly formed Google Health, which will be led by former Geisinger CEO David Feinberg. The Google Health name is apparently being recycled from the company’s failed personal health record, which was rolled out in 2008 and shut down in 2011 when the company finally realized the obvious – nobody (including Google executives, no doubt) will bother entering their information into a PHR.

A Black Book survey of 3,000 hospital-owned or employed practices finds that 40 percent are budgeting to replace their practice management systems in favor of hospital-integrated systems, with 89 percent of hospital executives saying non-integrated EHR/PM systems impede their ability to participate in alternative payment methods. Hospitals say moving to an integrated PM system increases scheduling satisfaction, increases collections, and reduces time and resources required. Allscripts, GE Healthcare, and Cerner topped the integrated ambulatory systems review, while NextGen, Aprima, and Azalea Health took the bottom spots. The results might seem screwy, but as reader Longtime HIT Marketer reminds us, Black Book is not evaluating products or deep-diving with a handful of handpicked customers, but instead is simply reporting the perception of a statistically valid number of users. As he or she adds, “If Allscripts clients believe their products are integrated, then they are integrated.” 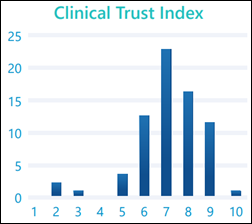 Microsoft announces the open source FHIR Server for Azure. And please, enough with the witless “fire” puns since it’s a convenient but illogical way to sound it out (the accurate way will elicit more gasps than giggles).

Analysis finds that half of the $52 billion in quarterly profits of publicly traded healthcare corporations came from just 10 companies, nine of which sell drugs. Drug companies pocketed nearly two-thirds of the profit on just 23 percent of the revenue. The new tax law that reduced corporate tax rates helped, as AbbVie paid just $14 million (0.5 percent) of its $2.76 billion in profit in taxes, while Pfizer’s tax rate was just 1.6 percent. 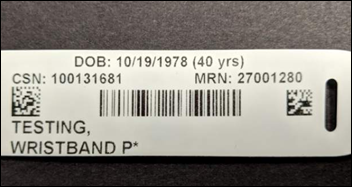 St. Charles Health System (OR) removes patient gender from wristbands at the urging of psychologists who say it causes harm to transgender patients while providing no benefits. Epic reviewed how it stores gender or name to determine how the information is used – to address the patient, to communicate with insurers, or for clinical purposes – although it says only one-third of customers use its expanded gender identity categories. It’s a fine line to walk when such patient characteristics as age, race, ethnicity, weight, religion, and genomic characteristics are required to make good clinical decisions, yet aren’t appropriate to use elsewhere, with the saving grace being that electronic systems can show the information only to those who need it. 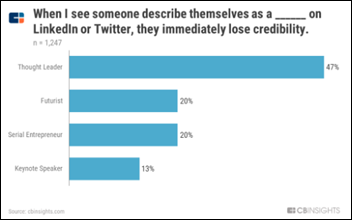 I get the newsletter of innovation and investment advisor CB Insights, which also produces conferences. CEO Anand Sanwal offers these ideas that are pretty much the opposite of health IT conferences:

The CB Insights rant led me to create my own poll. Which terms turn you off in a LinkedIn profile, Twitter profile, or speaker bio? (note: the self-flattering choices all came from the LinkedIn profiles of health IT folks whose list of accomplishments and tenure per employer are, to be kind, a bit short). I’m the only LinkedIn profile self-reporting as “blowhard” of the many who repeatedly earn the title. Has ‘health IT’s poet laureate” been claimed? 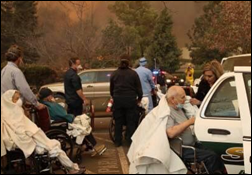 Weird News Andy pivots from his entertainingly odd stories to laud the nurses of Adventist Health Feather River Hospital (CA), who hastily evacuated patients as the Camp Fire reached the hospital’s parking lot, then had to make their way back to the hospital when their own escape routes were blocked. The hospital employees set up triage in the fire-surrounded parking lot for locals who were unable to evacuate, then were ordered by firefighters to leave when the hospital roof caught fire, by which time roads were less congested because everybody had already fled for safety. 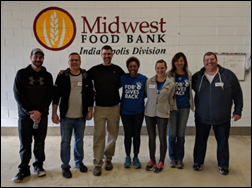