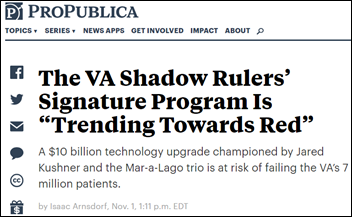 Cerner has reportedly emailed veterans groups to warn them of “negative media coverage, including a piece from ProPublica.”

From Fortune Teller: “Re: Medicare’s Patients Over Paperwork initiative. Do you have a prediction on what to expect?” I’ll let readers and Dr. Jayne chime in on the proposed changes to E&M codes, office visit documentation, and other paperwork that were first floated by CMS a year ago. It’s hard to separate meaningful HHS/CMS announcements from the political rhetoric spouted by its campaigner-appointees, so I’ve quit trying.

I added a “Add/Read Comments” button at the bottom of this post. It will make it easier to add a comment after reading. Let me know what you think.

Mrs. HIStalk shamed me into accompanying to seeing yet another movie (a rarity for me), in which case I give “First Man” a B- for being dull, presumably accurate, and nausea-inducing for using the “shaky cam” such that living room scenes are far harder to watch than when Gemini and Apollo spacecraft are careening wildly through space (“The Right Stuff” is about a hundred times better in every way). Before that, I laughed out loud at the preview of awful-looking sing-along, Queen-approved puff piece “Bohemian Rhapsody” as the audience all reflexively ducked to avoid being gored by the massive fake teeth of Freddy Mercury (Rami Malek).

Orion Health finalizes its sale of Rhapsody to technology investment firm Hg, enabling Rhapsody to launch as an independent company in Boston under the leadership of former McKesson executive Erkan Akyuz. The company, which offers health data integration software, plans to increase staff by 40 percent over the next 18 months.

Bloomberg reports that Elliott Management and Veritas Capital have teamed up to bid on Athenahealth. Veritas acquired GE’s ambulatory care, revenue-cycle, and workforce management software business for $1 billion in April.

NextGen Healthcare, in its first quarterly report since changing its name from Quality Systems, Inc. on September 10, reports Q2 results: revenue down 2 percent, adjusted EPS $0.24 vs. $0.22, beating earnings expectations but falling short on revenue. Shares dropped 24 percent on the news, valuing the company at $968 million. From the earnings call:

McKesson CEO John Hammergren will retire on March 31, 2019. to be replaced by President/COO Brian Tyler. 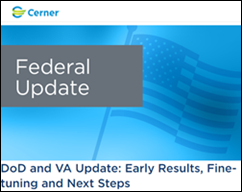 Cerner Government Services President Travis Dalton provides an update on the company’s DoD and VA software implementation efforts, highlighting workflow and care improvements made at the initial DoD implementation sites and the company’s receptiveness to progress reports from those facilities, which, as he acknowledges, have been seen by some as setbacks. He adds that the company is ready to kick off implementations at military medical facilities in California and Idaho. 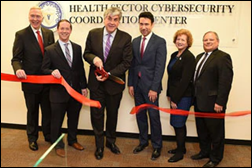 HHS re-launches the Healthcare Cybersecurity and Communications Integration Center as the Health Sector Cybersecurity Coordination Center. HC3 will operate under the authority of the Department of Homeland Security. The initial HCCIC suffered from organizational delays and leadership setbacks tied to allegations of ethics violations that led to an OIG investigation.

A reader sent this Reddit-posted breach item claiming that employee and dependent information from Cerner’s health plan was posted to a company wiki and had been visible internally for nearly a year. I reached out to Cerner and received this response:

Some data about associate benefits was posted on a password-restricted intranet site. The personally identifiable information was not exposed or accessed by anyone from outside the company. The data was viewed by a small group of associates, all of whom have had extensive HIPAA training. Due to the limited nature of the exposure, we determined that this did not constitute a data breach and we are not formally reporting this matter.

IBM’s Red Hat acquisition will enable it to move Watson Health services to a hybrid cloud model, which the company says will give customers easier access to data for analytics and AI projects. Initial converted data sets will include claims and patient data from IBM’s Truven Health Analytics, Explorys, and Phytel acquisitions.

A Kaiser Health News report says that precision medicine for cancer treatment sounds good, but insurers cover the cost poorly if at all because the treatments are off label and evidence is lacking that they extend lifespan. The article profiled a breast cancer patient who can’t afford the $17,000 per month cost of AstraZeneca’s drug, and after the story ran, the drug company immediately offered to comp it (thus proving that in our unbelievably screwed-up healthcare non-system, the biggest shortage we have isn’t of doctors or other clinicians, but rather reporters).

A nurse in Germany who is serving a life sentence for killing two hospitalized patients confesses to killing at least 100 more in two hospitals, explaining that he enjoyed trying to resuscitate the patients he chose randomly to inject with arrhythmia-inducing drugs. Authorities and the families of his alleged victims question why he wasn’t caught sooner, even in one case in which he was caught in the act of injecting a patient but was allowed to work for another two days, during which time he killed another one. Hospital records showed that death and resuscitation rates doubled when he was working, a nice piece of analytical work in every way except timeliness.