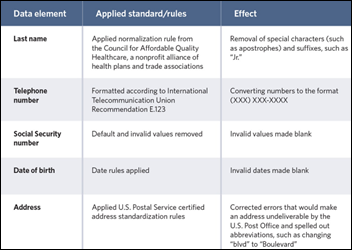 From Barely Constrained Capitalist: “Re: David Bradshaw of Memorial Hermann. Now working as a contractor for Cerner. Did we ever learn why he was fired from MH?” David’s LinkedIn says he’s working with a “large EMR solution provider” as a population health management advisor, which must pay a lot less than the $1.3 million he made last year. Memorial Hermann just announced plans to merge with Baylor Scott & White to form a massive health system that employs 73,000 people running 68 hospitals from the Gulf to the Oklahoma border. Most of the newco’s named executives are from BSW, so maybe he saw the CIO writing on the wall. Regardless, parting ways at that level is often the result of leadership or strategic changes that are not indicative of personal performance and certainly we don’t know (or need to know) the details of his departure. I think MH uses Cerner and BSW is mostly Epic and Allscripts, not that I would expect them to standardize IT systems. The footnote here might be that big-name CIO jobs are declining in number as their employers frantically merge and affiliate to flex their market power for self-enrichment. Oh, sorry, to deliver the efficiency improvements, reduced costs, and improved care that such mega-mergers always create in their maniacal pursuit of patient-focused excellence.

From Brangelina: “Re: HIMSS. You haven’t commented on their IRS tax filings recently.” I haven’t been able to locate their most recent reports, so I’ve emailed a request for them to send their Form 990 my way.

From Standard Spiel: “Re: clinical mobility poll. Check out these results.” The HIMSS-owned publication writes lengthy analyses of its online polls down to the fractional percentage point, but those typically generate only 100 or so anonymous responses that make any conclusions questionable. I usually get 200-400 poll responses to each week’s HIStalk question and even then I don’t spend a lot of time dissecting the statistically questionable results – it’s just a fun snapshot of what readers think that merits no further analysis.

Listening: new from The Sea Within, a new prog supergroup led by Roine Stolt and other members of The Flower Kings.

At least GE’s alarming levels of suckitude weren’t limited to its now-abandoned GE Healthcare IT efforts. GE’s board fires Chairman and CEO John Flannery after just over a year on the job, seemingly shocked that he couldn’t dump ballast quickly enough to save the sinking ship he had just inherited. GE names outsider Larry Culp (who?) to replace him as CEO and board chair. Flannery shared GE Healthcare heritage with predecessor and fellow oustee Jeff Immelt, so maybe that’s not the best group to tap for leadership talent. The new guy comes from Danaher, which sells an odd mix of bioscience products (Beckman Coulter, HemoCue, Molecular Devices) and unrelated stuff like the Pantone color matching system. Above is the definitely ugly five-year GE share performance chart, in which it shed 51 percent of value while the Dow was rising 75 percent. The company’s market cap has declined to barely over $100 billion, so hopefully your employer didn’t spend a lot of cash in gifting budding executives with the how-to business books written by Neutron Jack Welch that were all the rage in the 1990s when people still admired the company. GE was among the 12 industrial giants that made up the first Dow Jones Industrial Average in 1896 and was the last of those to drop off the 30-company list in 2018. GE waved goodbye to health IT through the rear window of its submerging dump truck in April of this year, handing that business off to Veritas Capital for $1 billion. It would still like to spin off GE Healthcare, one of its few bright spots, but acquirers and investors don’t love company turmoil.

Provation, fresh off its sale by Wolters Kluwer to a private equity firm, hires Tom Monteleone (Ancile Solutions) as CFO and Jim Mullen (Nextech Systems) as SVP of global sales.

Australia’s Royal Adelaide Hospital will spend $7.8 million to extend its offsite paper records storage and delivery service for three years, with the failure of its over-budget, behind-schedule Allscripts implementation forcing it to store records offsite since the new hospital’s floors weren’t designed to handle that much weight. The health minister said this week that an independent committee has ruled out continuing the EPAS rollout, so it will either be overhauled or scrapped. Allscripts was supposed to have gone live four years ago at a cost of $158 million, but costs have swelled to $340 million and the rollout stalled as doctors complained that it was unsafe. The hospital might want to investigate the circumstances leading to the approval of its questionable architectural design, which looks like someone sprayed machine gun fire into an ugly airport terminal.

InterSystems announces IRIS for Health, which provides a FHIR application development framework, support for every national and regional interoperability standard, and a normalized and extensible data model. Its capability will be added to HealthShare and TrakCare products next year.

A new KLAS report covering in-home patient monitoring, released in partnership with the American Telemedicine Association, finds that of the small number of organizations surveyed (24) and the small number of patients being monitored, most are happy with their programs despite most of them not achieving key outcomes. The report notes that the line between vendor monitoring and provider outreach is blurred and that most organizations say their program pays its own way under existing capitated and bundled payment models. Legacy vendors include Honeywell Life Care Solutions, Medtronic, and Philips, while more flexible upstarts are Health Recovery Solutions and Vivify Health. 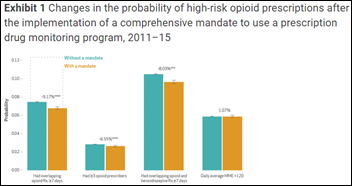 Researchers find that laws requiring prescribers or their delegates to check state prescribing databases caused a 7.2 percent reduction in patients with three or more opiate prescribers, but EHR integration is the holy grail. The authors note that interstate data sharing isn’t really necessary since doctor-shopping across state lines seems to be rare. 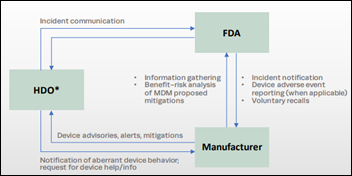 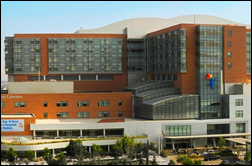 VA OIG is reviewing last year’s manual cancellation of 250,000 radiology orders across eight hospitals during a push to remove duplicate and outdated requests, raising concern that some of the studies might have been medically necessary or had been entered as future orders that had not expired. As an example, as many as 10 people under the direction of the radiology managers at the Tampa VA cancelled orders without consulting doctors or patients. The Columbia, SC VA topped the leaderboard with nearly 30,000 outstanding radiology orders, with public outcry pushing VA brass to vow they would clear the backlog (although maybe not in the smartest way). 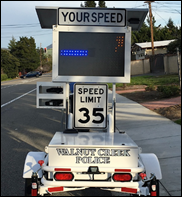 The DEA is installing license plate readers on the back of those highway signs that tell you how fast you’re going, an extension of the 2008 program in which all levels of law enforcement share data from license plate readers and surveillance cameras, some of them using facial recognition technology to identify the driver and passengers. Privacy advocates (shouldn’t that be all of us?) worry that the government could be applying algorithms to the huge database for less-transparent purposes. Genetec, the company that manufactures the license plate readers, has healthcare offerings – video surveillance, access control, and license plate tracking cameras for parking lots that can be installed in access gates or on top of security vehicles to track people parking where they shouldn’t. 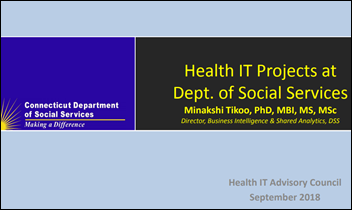 Members of Connecticut’s Health IT Advisory Council – charged as the exclusive creator of a state HIE – are stunned to learn from a presentation at its September meeting that the Department of Social Services is continuing its previously failed efforts from 2007 to build a similar system that would not cover the whole state. Both organizations have received CMS funding.

Health economist Zack Cooper notes that both the newly installed president of the American College of Emergency Physicians and its president-elect work for companies that profit by charging patients for out-of-network services (physician staffing firms TeamHealth and Envision Healthcare, respectively). The key issue of new President Vidor Friedman, MD is to make insurers pay for ED visits as long as the patient thinks it’s an emergency, even if they are wrong. His employer paid $60 million last year to settle a whistleblower lawsuit involving an upcoding scheme and he was previously known for creating a lobbying group for “emergency medicine advocacy” that mostly involved protecting ED doctor payments under ACA.

Memorial Sloan Kettering Cancer Center President and CEO Craig Thompson announces that he will give up his board positions at cancer drug maker Merck and drug research company Charles River. A 2015 report found that Thompson was making more than $750,000 annually from the companies and presumably was also granted stock options. That article also observed that while it’s easy to look up which doctors had their $15 lunch paid for by a drug company rep, it’s harder to find such board-level relationships. A 2013 analysis found that 279 university-affiliated employees served on the boards of 442 companies, earning $55 million in compensation and owning 60 million shares of stock. Thompson was sued in 2011 by previous employer University of Pennsylvania, which claimed he used intellectual property from his Penn research to start Agios Pharmaceuticals as a Penn employee in 2007 before he left for MSKCC. Apparently the many millions MSKCC pays him isn’t enough and Big Cancer is happy to use its coffers to make it rain for him and other academic researchers who help them make obscene profits on the backs of people with cancer.