This week is Prescription Opioid and Heroin Epidemic Awareness Week. There are several ONC resources available to help clinicians lean what technology is available to them, including prescription drug monitoring programs and electronic prescribing of controlled substances. My practice still hasn’t taken the leap to the latter since we dispense the majority of our controlled substances from our in-house pharmacy, although it’s now mandatory in some states.

AMIA has issued a Call for Participation for its 2019 Clinical Informatics Conference in Atlanta. The CIC meeting has a greater focus on applied clinical informatics, clinical decision support, and health policy compared to the annual fall AMIA meeting. Atlanta is a fun town and I’ve heard the clinically-focused meetings are great, but I’ll miss it due to it conflicting with my annual stint teaching in an outdoor classroom program.

I had some great reader feedback on my recent piece about cultural competency. Readers seem to appreciate the articles that aren’t necessarily pure healthcare IT but touch on issues that many of us face in the workplace.

One reader shared their own experiences with cultural competency training that’s likely to be minimally effective. It’s being delivered as a single mandatory three-hour session and we all know how much information people really absorb after the first hour or so. The reader notes, “Everyone I’ve talked to has been longing for the olden days before text pagers, when you could go to a meeting, set off your own beeper by surreptitiously turning it off and back on again and then acting surprised before rushing out to respond to the ‘emergency,’ never to return to the dreaded mandatory activity.”

The training is also being delivered lecture-style to large groups, which is a shame because group discussion could really bring this topic to life. If care teams or groups of workers attended together, discussion could help them learn more about each other and how to work together effectively as a team as well as with their patients. The reader goes on to describe an institutional push to curb profanity, noting the need to start “whipping out thesauruses looking for allowable substitutes – maybe they should just put Ivory Soap dispensers in the hall to allow cleansing of tongues and improved hand washing in one swoop.” I suggested they consider the Elizabethan Curse Generator, which automates insults in Shakespearian English. Take that, thou distempered fat-kidneyed wagtail!

I was glad that Jenn mentioned the annual Physicians Foundation report on the state of physician practice. The decline of independent practice continues, with barely a third of the 9,000 physicians surveyed using that term to describe themselves. Although Jenn covered some of the highlights, including that 80 percent of physicians feel they have experienced burnout, I found some additional statistics that were thought-provoking:

The report includes a listing of questions and responses aggregated by various demographic factors including age, employment status, gender, and specialty. It also includes direct comments from respondents, which start on page 50 if you’re interested.

One of the mechanisms that physicians use to combat burnout and reduce the amount of time spent interacting with the EHR is the medical scribe. JAMA Internal Medicine ran an article  this week titled “Association of Medical Scribes in Primary Care With Physician Workflow and Patient Experience.” The question posed was whether using scribes decreases documentation burden, improves productivity, improves patient communication, and enhances job satisfaction among primary care physicians. Not surprisingly, the study (although limited at 18 primary care physicians) showed that using scribes was linked to reductions in documentation time and improvements in productivity and job satisfaction.

I’ve been in a practice that uses scribes for the last three years, although I don’t always have a scribe during every shift. We deploy them based on volume of patients seen at our various locations, so if you are scheduled for a lower-volume location you may be on your own. When it gets busy and five or six patients walk in at the same time, you definitely wish you had a scribe. Although I’m fast with the EHR and have tons of personalized templates, macros, and order sets, it’s still not as fast or as accurate as working with a scribe who can document while you’re doing the exam and speaking with the patient.

Unfortunately, many of our scribes are pre-meds or post-baccalaureate students trying to gain admission to medical school or a physician assistant program. This means that once the admissions letters come out, we have to hire a fresh crop of scribes and attempt to turn them into Olympic athletes before influenza season hits. 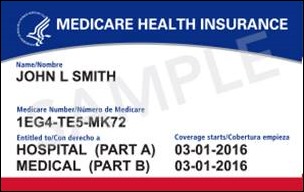 The new Medicare cards continue to roll out, with more than 35 million mailed to date. Medicare is processing claims and eligibility requests using the new Medicare Beneficiary Identifier and it seems to be going smoothly for the regions where the new cards have arrived. Cards should be mailed to all Medicare participants by April 2019. I polled a couple of colleagues on the revenue cycle side and haven’t heard of any major hiccups, but would be interested to hear from readers who are knee deep in it (especially any readers who are Medicare beneficiaries themselves.)