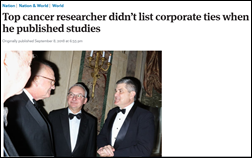 Memorial Sloan Kettering Cancer Center (NY) CMO José Baselga, MD comes under fire after media outlets report he failed to disclose his financial ties to research journals in which he was published. Baselga has served on the boards of and performed consulting work for dozens of pharma and healthcare companies, yet has systematically failed to report the millions of dollars in payments received when speaking or writing about sponsored clinical studies. 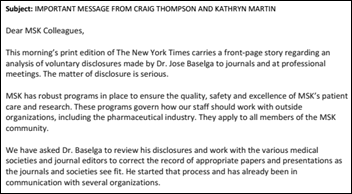 Adding insult to injury is the fact that Memorial Sloan Kettering has not yet censured Baselga in any way, other than to call for its staff to do a better job of disclosing their corporate relationships.

Baselga’s lapse highlights not only a lack of ethics on his part, but the slippery slope prestigious research publications like The Lancet and New England Journal of Medicine must walk when deciding to publish research. Most rely on an honor system, and for some, it’s simply a matter of not enough background-checking resources to go around. While publications like the American Association for Cancer Research have never barred an author from publishing, many are now reviewing their submission and review processes.

From Vaporware: “Re: VA CIO nominee’s remarks on speeding up the Cerner project timeline. Summary: ‘We can do this faster,’ says someone who has never implemented an EHR. ‘You’ll be held accountable,’ says someone who never held anyone accountable. ‘LOL. $10 meeeellion dollars!’ says Zane on his way to the bank.” VA CIO nominee James Gfrerer told a Senate hearing committee last week that getting the Cerner switch flipped in under 10 years is definitely on the table. Nominated by President Trump at the end of July, Gfrerer spent two decades in the Marine Corps before serving as a senior military advisor in the State Department and then moving to E&Y’s cybersecurity practice. 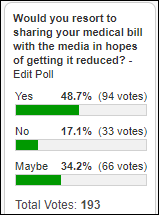 The majority of respondents would have no qualms about sharing their medical bills with media outlets in hopes of getting them reduced, though my use of the word “resort” implies that it would be a last-ditch effort after all other avenues have been exhausted. Greg points out that, “If the healthcare organization is not responsive or unwilling to work with me on the bill, the media is one outlet I’d consider reaching out to. Any business should expect what they say to their customers to end up in the news or on TV. With the laws in the US so skewed towards powerful interests, public shame in the media is one of the only options an average person has to fight with.” Lisa admits that it would “definitely not be my first choice, but as a last resort it’s better than bankruptcy. So far, I’ve been able to challenge and remove billing items that are clearly inappropriate, but what do you do if the billing folks refuse to clean up errors?” Mark says he’s “already used that approach and leveraged it effectively. Know your facts, prepare your facts, and share them with others so that all can benefit. When my wife had a hip replacement, without complications, and the net charges were 2x of the local competition, 2.5x what the facility accepts for a Medicare patient, put the the pen and paper (keyboard and email) to the task. Bottom line – fees reduced, perhaps humbled the facility, for a moment.”

New poll to your right or here: Would you purchase a “premium” genetics testing service from at-home kit companies like 23andMe? 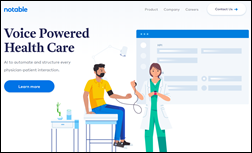 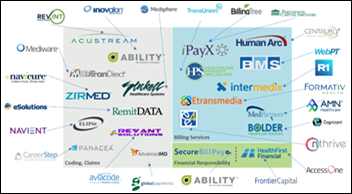 Healthcare Growth Partners recaps investment activity over the last year in RCM markets that include patient financial responsibility, complex claims from non-traditional payers, and coding and claims as they relate to connecting providers and payers. 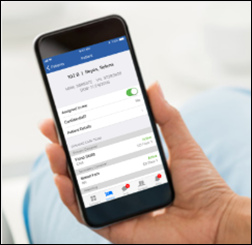 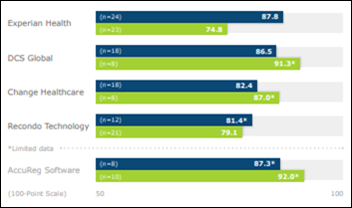 A new KLAS report on patient financial access finds that AccuReg ranks highest in customer satisfaction across categories, while Experian Health sees similar rankings from broad adopters. Recondo Technology leads the way in automated preauthorizations, but lags other vendors when it comes to customer perception of its positive impact on patients, staff, and billing. Experian Health’s customers, however, are the most likely to share patient access success stories. Change Healthcare wound up being the only vendor whose customers have all realized the benefit patient access solutions have on back-end billing.

British Airways suffers another privacy black eye after hackers breach its website and app, compromising personal and financial information tied to 380,000 passenger transactions. The airline came under fire in July when its social media team asked passengers with service complaints to post personally identifiable information on Twitter to help resolve their issues, claiming it was necessary to comply with GDPR.

HITRUST introduces a Shared Responsibility Program to help organizations and their service providers clearly understand their roles regarding ownership and operation of security controls. 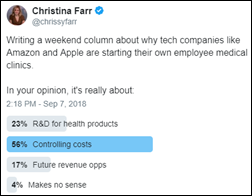 CNBC survey-takers believe controlling costs to be the top reason companies like Apple and Facebook are bypassing third parties like Premise Health to set up on-site clinics for their employees.