Harris Computer Systems acquires Iatric Systems, which it will run as an independent business unit.

Iatric’s website says it has 200 employees. The company is headquartered in Wakefield, MA. It has won awards for patient privacy monitoring, specimen collection barcoding, interoperability, and EHR optimization.

Listening: the amazing if unlikely 2011 pairing of Amy Winehouse and Nas, leading me to belatedly appreciate her troubled genius. The eclectic streaming station roped in my scanning with the little-heard 1967 tune “Monterey” by Eric Burdon and the Animals and moved on to a weird mix of great music, including that of Amy, who died of alcohol poisoning in 2011 as her initiation into the 27 Club of musician deaths. 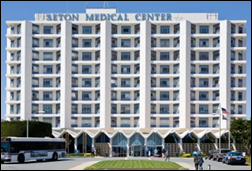 Politico reports that debt-ridden Verity Health System, acquired by Patrick Soon-Shiong last year, will file bankruptcy in the next few weeks. The article notes that Soon-Shiong forced the system to implement Allscripts Sunrise when he held a financial stake in that vendor, costing the health system an estimated $20 to $100 million even though it preferred Epic. Losses have forced the health system to cut back on IT infrastructure services and charity care. The health system lost $119 million in the year ending in June 2018 versus an expected break-even budget even as Soon-Shiong’s management company was paid $20 million. 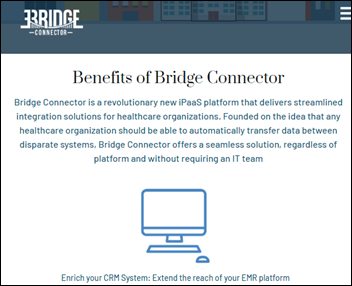 Palm Beach Gardens, FL-based Bridge Connector, which integrates customer relationship management systems with EHR and other hospital systems, raises $5.5 million in a Series A funding round that follows a $4.5 million investment in its June 2018 seed funding round. 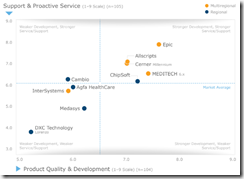 A new KLAS report covering the European EHR market finds the top vendors to be Epic, Cerner, and Allscripts in that order, with Epic growing market share in Netherlands and Scandinavia despite customer feelings that its approach is US-centric and Cerner seeing its growth mostly in the UK but with inconsistent delivery. Meditech and Allscripts are noted as performing very well for their users despite a small customer base. The top three vendors in terms of 2012-2017 market wins are InterSystems (by far), Agfa, and Epic. 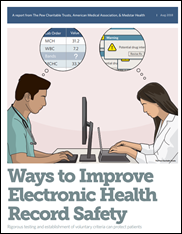 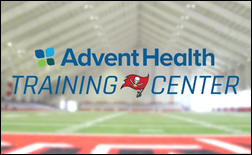 Adventist Health System – which is changing its name to AdventHealth – buys the 10-year naming rights to the practice facilities and administrative offices of the Tampa Bay Buccaneers NFL football team, saying the move will allow it to “identify and tackle important health issues in the Greater Tampa Bay Area” (the pun may or may have not been intentional). 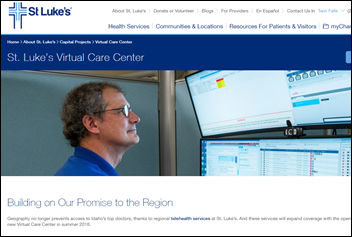 OSEHRA will create an international version of the VA’s VistA EHR, with participation from South Korea, China,  and Jordan. 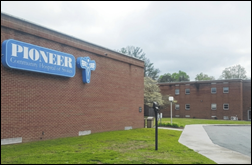 Another struggling, rural hospital gets in trouble for allowing itself to be used in a questionable lab billing scheme. Blue Cross Blue Shield of North Carolina sues LifeBrite Hospital of Stokes and removes the hospital from its network after its volume of submitted lab tests rises from 267 per month to 67,000, most of them for urine toxicology screening for out-of-state patients who had no hospital connection. BCBSNC paid $11 million for what it says are fraudulent, inflated-price tests before it stopped payments, claiming that the hospital was purchased strictly to take advantage of its in-network contracts. LifeBrite bought the bankrupt 99-bed hospital last year – then named Pioneer Community Hospital of Stokes — for $400,000 and BCBSNC says it has billed $76 million since. The Georgia company has just one other hospital, but runs national reference lab LiteBrite Laboratories. 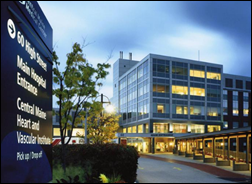 Central Maine Healthcare’s recently hired CEO Jeff Brickman says he moved too quickly in trying to turn around the health system’s finances, causing doctors and employees to push back over its Cerner implementation. Their no-confidence vote failed, however, as the board reiterated its support for him. 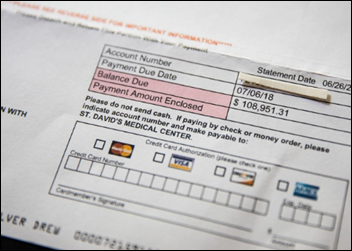 We’re going to need a lot more reporters: an HCA hospital tells a heart patient that his insurance will cover his four-night, out-of-network heart attack stay, then bills him for $109,000 and turns it over to collections when the high school teacher can’t pay. State-mandated protection against balance billing didn’t apply in his case since his employer is self-insured. Experts say Aetna had already paid the hospital at least 2-4 times reasonable charges. NPR’s coverage of the story suddenly resulted in the for-profit hospital offering a “financial assistance discount” that reduced the teacher’s bill to $782, a 99.3 percent “bury this story now” cost savings that it will surely make back from patients whose stories earn less press. 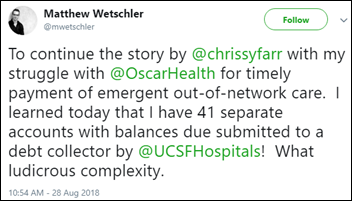 Meanwhile, former ED physician Matthew Wetschler – who was left with a $500K bill after his insurer Oscar refused to pay out-of-network San Francisco General Hospital for emergency treatment after he broke his spine – says UCSF has turned over 41 separate accounts under his name to debt collectors. This is a good lesson – given their inability to hold prices down by negotiating with market-dominant health systems, about the only tools insurers have left are to (a) deny coverage; (b) increase the portion patients pay; and (c) most damaging of all, to create such narrow networks that bills for emergency care or services received while away from home are almost certain to be denied, with the patient getting stuck with the balance at full list (imaginary) price.