Auto insurance is required in all 50 states, with two limited exceptions: NH, where you are still personally liable for damage done, and VA, which requires you to pay $500 annually if you don’t want to insure. The premise for these laws actually map quite well to healthcare. Imagine without the legal requirement – one person without insurance crashes, damages a building, injures a bunch of people, and ultimately declares bankruptcy to avoid the expense for liability. Everyone else gets to cover the tab. Requiring insurance puts money into the system to spread some of the risk. (Ummmmm)

CommonWell hooks itself up to the rest of the world! Only three years late and still not generally available. (DoD will be first in line once it’s ready, so as to exhibit “leadership,”right?) This is the great golden spike moment for interoperability – except with the Carequality Railroad traversing the entire continent to connect CommonWell San Francisco trolley network. (Vaporware?)

[Project] branding becomes important at this scale. With departmental or smaller implementations, using the vendor/product as a brand isn’t usually a problem. However once you hit “whole organization” level systems, as you do with an organization-wide EMR/EHR, putting a bit of distance between you and the primary vendor becomes important. (Brian Too)

I worked in an organization that had policy of renaming all vendor systems to a name of the organization’s choosing. Although this might seems confusing, it was actually very useful. Many implementations consisted of more than one licensed product so calling it the name of the dominant product wasn’t accurate. It also reinforced the notion that it was our system running our processes for our patients and members. The name was first coined for the initial implementation and stayed with the system through retirement. Our marketing people were definitely involved because the names were thoughtfully chosen and reflected the purpose of the system and the aspirations of the organization for the benefits it would bring. (A Rose By Any Other Name) 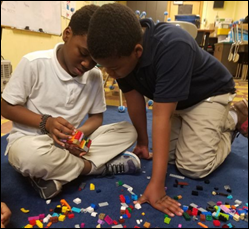 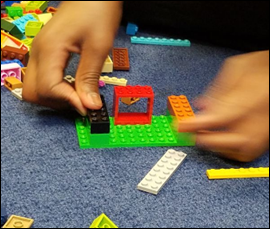 Reader donations funded the DonorsChoose teacher grant request of Ms. J in Missouri, who asked for building materials for her classroom of mostly refugee students whose primary language isn’t English. She reports, “This has been an extremely valuable learning tool in the classroom and very motivating for the students. We have done three challenges so far. The one in the pictures was to build a house. It had to have certain components, like a window, a door, some furniture on the inside. When the students finished their creations, they shared about them (first with a partner, then with the whole group). The reason I had them share with a partner first was so they could improve their houses with additional ideas. They really like their remodeling stage. Once we shared out as a whole group, the students wrote about their houses. We have done similar projects with math shapes and animals. The students love it when we get out the Legos. They are excited to hear about the challenge and their discussions of what fits in the expectations and what does not are amazing. Their reasoning is incredible. Thank you for providing these experiences for my students. Their ability to use their language and reasoning to convey their ideas will serve them very will as they move through school. We know that they are learning – even if they just see it as ‘Lego Challenges.’ We are grateful for all you do to support the growth of students — linguistically, socially, and academically.”

In Germany, neuroscientist and empathy expert Tania Singe, PhD is accused by current and former colleagues of being overly controlling and prone to bullying. They claim she had little empathy of her own, reserving her harshest behavior for pregnant employees — denying moms-to-be parental leave, calling them slackers who would need to work twice as hard to make up for their absence, and telling one who had miscarried that she would no longer be allowed to keep doctor appointments during work hours. 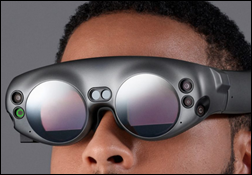 CNBC gets a first look at augmented reality headset Magic Leap, which has been shrouded in secrecy during its seven years of development and $2.3 billion in investment. The $2,300 developer’s edition is now available and the writer’s experience was mixed, saying it’s pretty cool to view a 3-D world being displayed on untethered goggles, but it’s hard to describe what the device does, there’s no way to show real screenshots since the human brain does the processing, it has limitations with ambient brightness and displaying human-like field of vision, and it will probably take years to get the product ready for mass consumption. Potential medical uses include supporting surgeries and offering chats with an AI-powered image of a doctor, but then again those use cases didn’t save Google Glass. 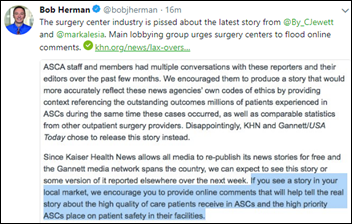 The ambulatory surgery center lobbying group urges members to post positive comments on locally republished copies of a Kaiser Health News article that describes the lax state of ASC regulation. KHN found that state rules vary widely such that oversight of injuries and deaths can be minimal and doctors who have lost their hospital surgical privileges for misconduct are free to open their own surgery centers. One surgery center for colonoscopy had two patients die in the same month during what is normally among the safest of surgical procedures, and in at least 17 states, surgery centers don’t have to report patient deaths.

A Pittsburgh local news site’s guest op-ed piece by healthcare transformation organization Lown Institute says UPMC’s planned $2 billion expansion should not be allowed or the health system should be stripped of its non-profit status, observing that UPMC receives $200 million per year in tax breaks but wants to build three high-profit specialty hospitals (cancer, transplant, and heart care) that don’t address local health needs such as obesity, asthma, binge drinking, and health disparities. UPMC wants to market the hospitals to wealthy patients abroad and wants to build two of them in suburbs where the percentage of insured residents is higher. UPMC CEO Jeffrey Romoff says, “UPMC desires to be the Amazon of healthcare.” Romoff was paid $6.9 million in UPMC’s most recently reported fiscal year, joining 32 UPMC executives who earned more than $1 million. 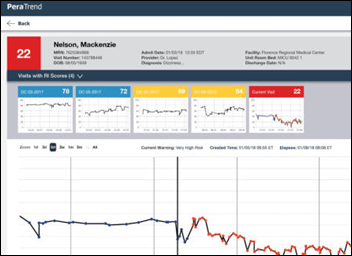 A New York Times opinion piece written by a hospice nurse and book author says more attention should be paid to the gut feelings of nurses, which she says aren’t really feelings but rather the clinical judgment that results from years of personal observations and experiences. Theresa Brown, RN, PhD notes that doctors generally ignore those feelings as documented in the EHR’s nurse notes. She talks up the Rothman Index, which combines EHR data – including that generated by nurses – to provide an early warning system for detecting at-risk patients. I interviewed co-creator Michael Rothman, PhD way back in 2010, but his comments are even more valid today:

We extract the amount of risk which is inherent in the value of each of these measurements and come up with a single score. Now in a sense, that’s what a doctor or nurse does when they go in. They come up with an overall sense of how the patient is and a good doctor does it well, or a good nurse does it well. But the problem is if a doctor is rushed, a nurse is rushed, how completely can they really evaluate all the data that’s there? Even even more importantly, do they really know how that patient was the day before when maybe this is the first time they’ve ever seen the patient? Getting that trend is very difficult to do, even if you’re a doctor and you’re sitting down and studying what’s in the medical record. It’s hard to figure out what the trend is, especially if it’s a gradual deterioration.

There’s one other thing, and that is, doctors tend to look at three things when they’re doing an evaluation. They look at vital signs, they look at lab tests, and they look at the last doctor’s notes. However, there is a source of information that they tend to overlook, and that is the nurse’s assessments. The nurses do what is called “the head to toe assessment” of the patient. It’s something that’s taught at nursing school. They evaluate each physiological system and they record it on the computer. Really, doctors don’t look at it. One of the things that we’ve done is we’ve said, “Hey, this is actually very valuable information about how someone is.” So we used nursing data in the calculation of our score. It gives the doctor access to something that he doesn’t normally look at. 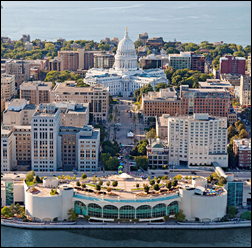 Total property values of Madison and Dane County, WI have exceeded that of the city and county of Milwaukee for the first time even though Milwaukee has nearly triple the population of Madison. Dane County’s population grew by 40.7 percent from 1988 to 2017 – largely driven by technology companies such as Epic — while Milwaukee County had just a 1.5 percent increase. 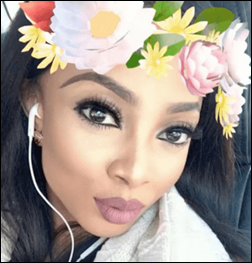 Bizarre: doctors coin the term “Snapchat dysmorphia” to describe teens who seek plastic surgery to “look better in their selfies” and to make them look like their Snapchat-filtered selves.The JAMA Facial Plastic Surgery article summarizes,

Social media apps such as Snapchat and Facetune are providing a new reality of beauty for today’s society. These apps allow one to alter his or her appearance in an instant and conform to an unrealistic and often unattainable standard of beauty … it can be argued that these apps are making us lose touch with reality because we expect to look perfectly primped and filtered in real life as well. Filtered selfies especially can have harmful effects on adolescents or those with BDD [body dysmorphic disorder] because these groups may more severely internalize this beauty standard.

Of course hacker conference attendees would quickly figure out how to override a hotel’s thermostat and then tweet out instructions so colleagues can try it at their own hotels. The guy above was asked whether it’s a tampering felony to mess with a hotel’s thermostat, which is says isn’t because it’s an intended feature of the thermostat (as long as the hotel doesn’t make guests sign a EULA before using, he says with nerd tongue in cheek). 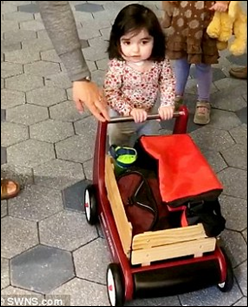 A 2 1/2-year-old toddler leaves Boston Children’s Hospital for the first time, having spent her entire life on a ventilator until she received a double lung transplant in September. It’s a feel-good (no pun intended) story as long as you can suppress your curiosity about what it cost and who paid.