The company also shuts down the Grouply.io Chrome extension that was designed to allow marketers to harvest such information on a large scale.

The latter problem was discovered by the moderator of a group for BRCA-positive women who worried that their potential breast cancer information could be shared with insurance companies, with the extension’s behavior documented and reported to Facebook by healthcare technologist Fred Trotter.

From Dockside: “Re: BJC HealthCare Information Services. Laid off 68 employees and 45 contractors Wednesday following the Epic rollout on June 2 at the remaining facilities. Health Information Partners (HIP), the internal group responsible for the Epic implementation (a joint venture with BJC and Washington University) did not seem to suffer any layoffs. We knew this would be coming at some point, but in our opinion it was handled very poorly. People were told individually and were given an hour to remove their personal items prior to being walked out. Those on PTO were given the news by telephone and told not to return to the office – their personal items were shipped to them. Those of us who were left finally received an email saying what was going on just after 4:00 pm Wednesday. Any semblance of the ‘family’ culture that originally came from the hospitals pre-merger has pretty much been wiped out and replaced with the typical cold corporate culture.” I reached out to June Fowler, BJC SVP of communications, marketing, and public affairs, who confirmed Wednesday’s elimination of about 10 percent of the health system’s IT workforce. She provides this statement:

Market forces are driving all healthcare organizations to deliver patient care services in new, more efficient, and more cost-effective ways. BJC’s positioning for sustained long-term success in response to these pressures will rely increasingly on information technology and IT expertise for innovative solutions. As a business enabler, IT must increase focus on strategic priorities and align work and resources in support of these priorities. Reprioritizing the work towards improved system stability, strengthening of information protection, and disciplined execution requires changes in the IT staffing structure. This realignment includes an adjustment of skills and capabilities required in IT and will eliminate some current positions. In some cases, new job roles and responsibilities will be created to enable improved capabilities and assure accountability for execution as well.

To adjust staffing levels to meet current priorities, we made the difficult decision to reduce the IT workforce effective July 11. The workforce reduction affects 68 employees and 45 IT contractors.

We recognize any action that results in job loss has a significant impact on employees and their families. There is a comprehensive compensation and outplacement support package in place to assist those who are directly affected by this necessary action. The BJC human resources team is working closely with these affected colleagues to support them through this transition. The reduction initiates action towards a major transformation of our delivery capabilities where IT will realign resources to deliver against BJC’s most strategic intents.

From Plebe: “Re: health IT influencer blogs. What do you think of this site’s list?” It’s not up to me to decide who influences whom, but I checked out the 32 sites and found that: (a) 13 are no longer online; (b) nine rarely post anything; and (c) the remaining 10 write something at least occasionally. I’m not getting into a quality debate on the content of those 10, but for most, their rather simplistic articles wouldn’t seem likely to influence anyone who themselves have actual influence.

July 26 (Thursday) 1:00 ET. “The Patient’s Power in Improving Health and Care.” Sponsor: Health Catalyst. Presenter: Maureen Bisognano, president Emerita and senior fellow, Institute for Healthcare Improvement. Patients, even those with chronic diseases, only spend a few hours each year with a doctor or a nurse, while they spend thousands of hours making personal choices around eating, exercise, and other activities that impact their health. How can we get patients to be more engaged in their care, and help physicians, nurses, and healthcare providers transition from a paradigm of “what’s the matter” to “what matters to you?” This webinar will present stories of patients and healthcare organizations that are partnering together with tools, processes, data, and systems of accountability to move from dis-ease to health-ease. 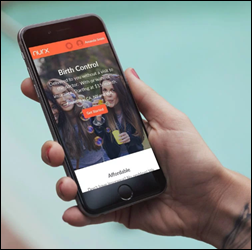 Alphabet’s Verily health business will partner with medical device company ResMed to apply sleep data to study the health and financial impacts of undiagnosed and untreated sleep apnea. I’m not sure how that will work since ResMed mostly sells CPAP equipment that would be prescribed only after a positive diagnosis for sleep apnea.

Analysts predict that health IT company Henry Schein will downsize after a regulatory filing hints at plans to increase efficiencies. The Melville, NY-based company spun off its animal health business in April and announced a joint dental software venture with Internet Brands last week. 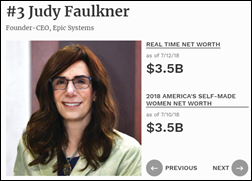 Epic Systems founder and CEO Judy Faulkner climbs three spots on the latest Forbes list of richest self-made women, proving that the “extreme fame leverage” of list cover girl Kylie Jenner (#27) isn’t necessary to achieve a net worth of $3.5 billion and the #3 ranking behind women involved in ABC Supply and Little Caesars (does anyone actually still buy awful Little Caesars pizza except as evening-out sustenance to be left for the kids and babysitter?)

PatientSafe Solutions develops an app for rounding and clinical communications. 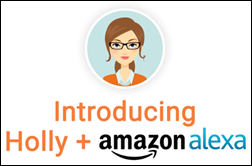 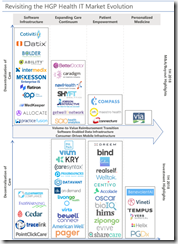 A new KLAS report on non-US EHR activity finds that Epic gained 16,000 beds in signing six contracts in 2017, more than doubling its small, non-domestic market share as concerns about high-profile problems at Cambridge’s implementation in the UK faded. InterSystems continued its rapid growth, especially in smaller, multi-hospital organizations, while Cerner’s growth was moderate and lagged its primary competitors. The early days of the UK’s Global Digital Exemplar program has seen only four new contracts signed, of which Epic earned two, System C one, and Allscripts one. 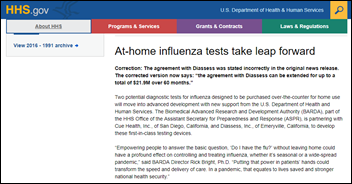 HHS awards Cue Health a $14 million contract to develop app-based flu-testing kits for the home and office that will include virtual consult and prescribing capabilities. The company announced a $45 million Series B funding round earlier this week. Diassess has been awarded a $10 million contract to develop a similar kit, though its focus will be on creating a disposable, battery-powered device for use during public health emergencies.

Public health officials in Nashville, TN discover that the PHI of thousands of HIV patients was accessible to all employees on a Metro Public Health server for almost nine months. The database, typically accessed by a small group of physicians, is used to track and help patients living with HIV.

Children’s Mercy Hospital (MO) faces its fourth data breach-related lawsuit, this time pertaining to an email phishing scam discovered in January that potentially exposed the data of 63,000 individuals. Children’s Mercy faced another suit from the same firm over a 2017 breach involving the PHI exposure of 5,500 patients. Two additional lawsuits involved the theft of paper records from employee vehicles. 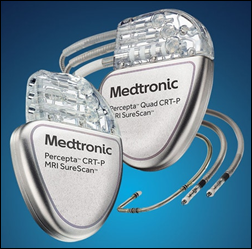 In England, the Royal College of Surgeons calls out the NHS after discovering the health service is still using 9,000 fax machines despite a nationwide push to convert to digital technologies. “NHS hospital trusts remain stubbornly attached to using archaic fax machines for a significant proportion of their communications,” says RCS chair Richard Kerr. “This is ludicrous. The NHS cannot continue to rely on a technology most other organisations scrapped in the early 2000s.”

UC Health describes its central data repository for all six UC Health systems at its Data Day in San Diego, noting these points:

CNBC reports that Amazon and Xealth, a digital prescribing and analytics startup, are in talks with several health systems to develop bundled medical product recommendation and delivery services for patients just before discharge. 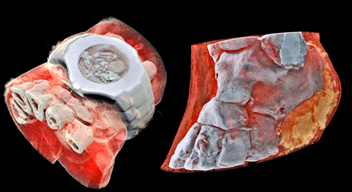 Weird News Andy is proud as a peacock that New Zealand scientists have performed the first 3-D, color X-ray on a human.