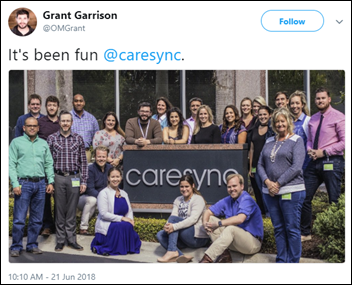 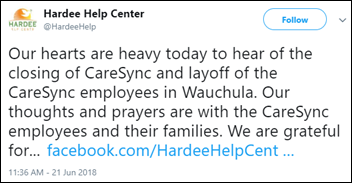 Chronic care management company CareSync shuts down. Reader Holy Mackerel alerted me to the development: ”Shipt founder Bill Smith offered on Monday to buy 100 percent of company stock for $7 million. Keeping in mind that investors poured in $79 million, he’d essentially be buying at $0.10 on the dollar. Bill backed out of the sale today. CareSync informed all employees at 9 AM of the news, and told them doors were closing and they had to leave by 10 AM.” Social media posts from disgruntled, former employees point to bankruptcy as the cause of the abrupt closure, which has left over 100 jobless.

From ml: “Re: Ascension IS. On June 14th, 2018, Ascension Information Services eliminated over 450+ positions throughout the US. This included directors, upper level as well as mid-level managers, and the majority of employee’s being IT at both the senior and junior level. This vast amount of cuts came as a shock to most employees. AIS was told from their parent Ascension Health that for FY18 to cut $100 million from their budget and now for FY19 starting July 1, 2018, they were told to cut another $155 million. This obviously included headcount since they were not even able to cut the $100 million from 2018.” Unverified. 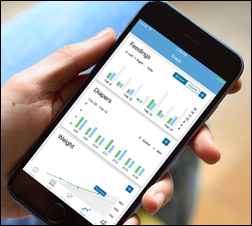 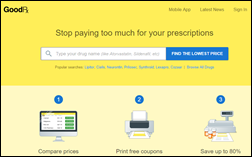 CNBC reports that prescription drug comparison pricing and coupon company GoodRx is considering selling itself. Analysts predict it will go for between $1.5 billion and $3 billion. Co-founded by Yahoo and Facebook veteran Doug Hirsch, the company has been around since 2011.

Surgeon, professor, and author Atul Gawande, MD will become CEO of Amazon, Berkshire Hathaway, and JPMorgan Chase’s new nonprofit healthcare venture, effective July 9. The still unnamed company will operate as an independent entity out of Boston. Gawande briefly mentioned his new gig at the end of his AHIP keynote: “I’ll only say it is a long target and I’m lucky to have an expectation that we’re going to take on the kinds of problems I’m talking about over the next decade. It’ll be gradual progress and there won’t be instant solutions.” 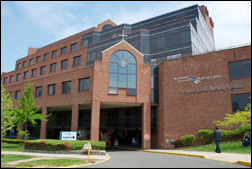 Omada Health adds programs for hypertension and type 2 diabetes, plus medication management and remote monitoring features, to its digital therapy offerings for employers and payers.

Members of the House Committee on Veterans’ Affairs will create a subcommittee devoted to keeping a close eye on the VA’s EHR overhaul and other major IT projects. Committee Chairman Phil Roe, MD (R-TN) is especially insistent on oversight given his own experience with health IT: “Having personally gone through a transition to a new health record system in private practice, I know how much potential there is for a project like this to be a huge and expensive disruption.” 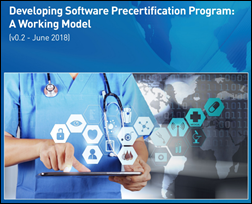 A year after its debut, the FDA updates its software pre-certification program guidelines to emphasize benefits for startups and small companies that haven’t yet established a track record of reliable development. The FDA plans to open up its pilot program, which initially accepted nine fairly big-name companies, to a broader applicant pool next year.

Pending Congressional approval, HHS will be renamed the Department of Health and Public Welfare if it takes on the $70 billion food stamp program outlined as part of President Trump’s proposed government overhaul. 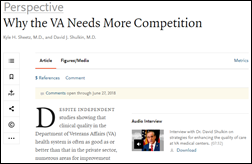 Former VA Secretary David Shulkin, MD shares why he believes competition – not privatization – will be key to the VA’s success as it works towards offering veterans greater access to care from non-VA providers:

“Although competition alone is not sufficient to improve quality, it can help to modernize performance standards, lead to new management practices within VA medical centers, and move the VA away from the possibility of privatization. Competition also ensures that private-sector providers that wish to care for veterans adhere to the highest quality standards — and formalizing those standards through legislation would allow the VA to better fulfill its responsibility to veterans and taxpayers. Veterans deserve a continually improving health care system, and the best way to ensure that they receive it may be to support the VA at levels that allow it to successfully compete with the private sector.” 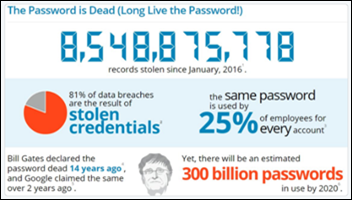 Passwords are losing relevance, yet gaining in popularity.

We’ve still got a long way to go.