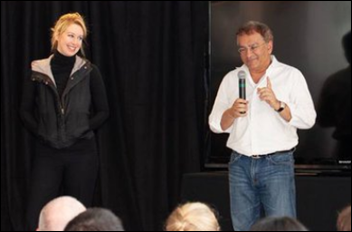 The US Attorney indicts Theranos founder and CEO Elizabeth Holmes and former President and COO Sunny Balwani for fraud, charging that as Theranos executives, they knew that the company’s blood testing technology was unreliable and was not competitive with conventional lab testing.

Holmes resigned as Theranos CEO just before the charges were announced Friday. She will remain on the company’s board, for whatever that’s worth when the company in question is on its last legs.

Holmes and Balwani face up to 20 years in prison plus fines and restitution payments.

From Portal in the Storm: “Re: patient portals. My EClinicalWorks patient portal still lists the prep for my year-ago colonoscopy on my current medication list. I asked the doctor’s nurse to fix it, so she changed it to ‘not taking,’ but it was still listed on my portal as a current med. I mentioned it to my doctor, who discontinued it, but it still shows up on my current medication list. ECW’s My PHR shows the status as ‘not taking.’ Also, my poor doctor sees all meds, both taking and not taking, in a single current medication list with no option to sort or filter to show just the active meds. When folks complain about usability, I always assume it’s some advanced review these systems need, when in fact it’s obvious things any new user could point out.” Unverified. 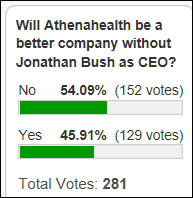 A slight majority of poll respondents think Athenahealth will be a lesser company without Jonathan Bush. Some respondents worry that the finance guys will take over from the visionary and cultural leader and instead of fixating on customers and product delivery, will jack up prices and hack at costs to improve the bottom line. Others say that without his dogged determination in focusing on long-term objectives, the bean counters will stifle innovation by just delivering what short-sighted customers say they want. One respondent said directly, “Steve Jobs was a douche, but I don’t think Apple is better off today.”

New poll to your right or here: has your employer had layoffs or other workforce reductions so far in 2018?

Thanks to respondents who provided honest, painful thoughts about how suicide has affected them.

Welcome to new HIStalk Platinum Sponsor Goliath Technologies. The Philadelphia-based company’s technology improves EHR user experience by helping IT departments anticipate, troubleshoot, and prevent issues related to slow log-in and application performance. It brings application monitoring for Cerner, Epic, Meditech, and other EHRs and business applications into a single console with real-time performance data, covering everything from endpoint to Citrix or VMware Horizon delivery infrastructure. Universal Health Services uses the system to monitor performance of its hosted Cerner system deployed nationally, where it logs into several Cerner applications every 30 minutes using a user’s exact keystrokes and network access to identify failures or slowdowns so they can be fixed quickly. That monitoring allowed UHS to pinpoint WiFi problems in a specific hospital. The company offers a demo and a 30-day free trial. I interviewed CEO Thomas Charlton a couple of weeks ago just because he sounded interesting and the company then decided to become a sponsor as a result. Thanks to Goliath Technologies for supporting HIStalk.

I had a good experience this weekend with an independent urgent care center in a tiny, remote town whose physician assistant recently treated my minor injury. The place was well staffed but empty, so I didn’t have to wait. They don’t accept my insurance but they charge just a fixed $75 (which in my case included a lidocaine injection, a bunch of silver nitrate sticks, and the usual odds and ends) and they used the insurance card information to retrieve my meds and problem lists, which they verified with me at the start of the visit. I received an email immediately afterward containing a link to sign up for the practice’s Athenahealth patient portal, and that went painlessly in simply entering the numeric code that was texted to my telephone number on file. I really worried about being forced to some hospital’s ED with the strong likelihood of getting stuck with out-of-network charges, so being quoted $75 made me happy, even more so when they treated and streeted me quickly. 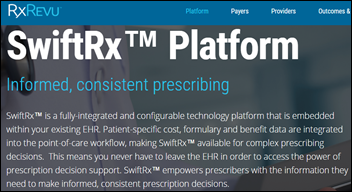 Former Cleveland Clinic President and CEO Toby Cosgrove, MD joins the board of Denver-based prescription decision support vendor RxRevu. The company’s board chair, Stephen McHale, was founder, CEO, and board chair of Cleveland Clinic spinoff Explorys,  which was acquired by IBM in 2015 and rolled into Watson Health.

Google is hiring for its Brain division, apparently for a research project called Medical Digital Assist that will use AI and speech recognition to create physician documentation. It may be a continuation of its Stanford Medicine digital scribe study from last year.

The AMA weighs in on augmented intelligence in a policy approved at its annual meeting, insisting in its own involvement to set direction, ensure physician friendliness, and integrate it with medical practice. AMA used the term AI to describe “augmented intelligence,” with the subtle difference being important – “augmented” means that AMA considers AI’s role as offering recommendations to doctors who are free to use them or not.

HIStalk Sponsors Named to the HCI 100