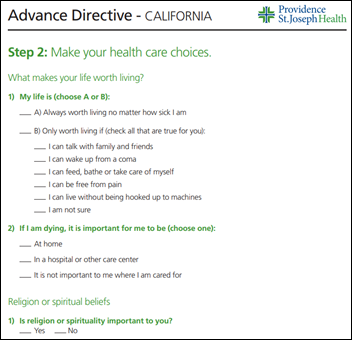 Patient wishes will be displayed via the EHR — along with goals-of-care conversations — to clinicians. The EHR will also send an alert to the physician if treatments are ordered that conflict with the patient’s desires.

Clinicians will also prescribe videos and other resources to help patients understand their end-of-life options in a partnership with the non-profit foundation ACP Decisions. 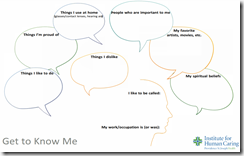 The project is being led by the health system’s Institute for Human Caring, which also offers “Get to Know Me” posters that it hopes will “deliver patients from anonymity.”

From Closed Doors: “Re: [vendor CEO’s name omitted]. Making headlines for attacking his former wife.” Sorry, but this isn’t news despite the reporting tabloid’s eagerness to pass it off as such and lazy parroting of the irrelevant story by other publications. The rag dug up divorce custody documents that are more than 10 years old and pressed the former couple for comments, both of whom admirably said they regret the way their divorce unfolded. Family stuff that has nothing to do with business should be off limits even if you are a public figure. Staying solvent as a newspaper or news site apparently means dumbing down content to the time-wasting drivel that Americans are anxious to read on their phones while sitting on the toilet, which is exactly where this story belongs. At some point your conscience needs to kick in, thus I won’t be part of it.

From Spurious Emission: “Re: poll. You didn’t offer your reaction to Zane Burke’s claim that the DoD report was competitor-instigated ‘fake news.’” I thought it was one of the stupidest things he could have blurted out on the record. It made the company look belligerently whiny instead of humbly grateful after winning a no-bid, $10 billion government contract. It also invites unflattering comparisons to thin-skinned others who define “fake news” as anything they wish had been kept secret. That plus suing a customer / prospect for voting to replace Cerner with Epic recalls the low points of the increasingly desperate Tullman regime at Allscripts before it was overthrown. I assume Burke was passed over in favor of his new, oddly experienced boss Brent Shafer, which might be a friction point for both sides that would encourage treading cautiously.

From Gene Parmesan: “Re: Cerner. We all assume the unnamed competitor was Epic that Zane was bitching about, but what if it was CliniComp, which sues everybody in sight for threatening its federal government revenue stream?” That’s an interesting thought. I don’t know if CliniComp has enough DoD juice to have had some influence over the MHS Genesis pilot project report. Anyone want to weigh in, or for that matter, to speculate on what the heck Zane was talking about?

From NoHorseInThisRace: “Re: CMS forcing hospitals to publish their charge masters. There actually is one way in which the charge master is immediately relevant and could impact consumer choice if made public – taxes. While no one will actually pay the CM rate even out of pocket, the IRS considers any debt forgiveness as taxable income. Therefore if a low-income consumer who’s likely to receive forgiveness has a choice between two hospitals — one that lists a knee replacement at $18,000 on the CM and one that lists it at $57,000 — the consumer would be well advised to select the former (assuming care metrics are roughly equal). At the end of the day, publishing CM isn’t going to be a cure-all (pun intended) for our cost woes, but it’s a start.” 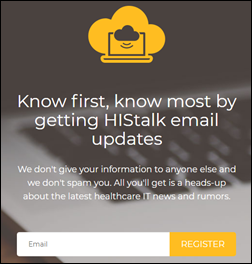 Please sign up again if you’ve stopped getting your HIStalk email updates, which long-time readers report several to me times each week. I’ve noticed that quite a few emails have been suddenly been bouncing back as undeliverable. Rejecting the emails in significant numbers are the mail servers of Allscripts, Athenahealth, the former Carefusion, the former Carolinas Healthcare, Cerner, Epic, HIMSS, Medhost, Medicity, Meditech, and Nuance. There’s no downside to entering your email again if you aren’t sure – you won’t get multiple copies regardless.

Here’s a post-holiday reminder to consider contributing your thoughts to this week’s “Wish I’d known” question. Maybe Zane Burke will chime in. 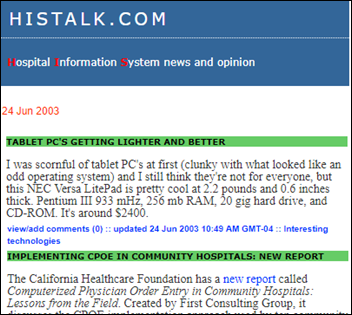 Sunday will be HIStalk’s 15th birthday, which is hard for me to comprehend. Back in June 2003:

I needed a distraction from my unsatisfying health system IT leadership job and decided that jotting down my industry thoughts each day would keep me sharp as I scouted for something better. I finally found that job in mid-2005, after which I decided that I should stop screwing around with HIStalk after two years (and no benefit beyond my own satisfaction) and focus instead on staying employed, which I reconsidered when I realized I had nothing else going on after work anyway. I’m still here as a case study of the “80 percent of success is showing up” model. If you’ve been a reader since 2003, tell me how you found the site and why you’ve spent a significant chunk of your life with me.

IBM Watson Health reportedly had big layoffs last week, with the “resource action” mostly focused on employees from its big-bet acquisitions Truven, Merge, and Phytel. You would think the machine’s claimed intelligence could have been used to predict the likelihood of acquisition success, but the technology’s capabilities are looking increasingly limited or “man behind the curtain” powered to the point that Ken Jennings must be embarrassed to have been beaten by it on “Jeopardy.” 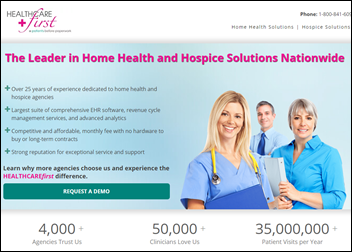 New Zealand-based Orion Health is discussing the sale of all or part of the company with unnamed parties, reports suggest. 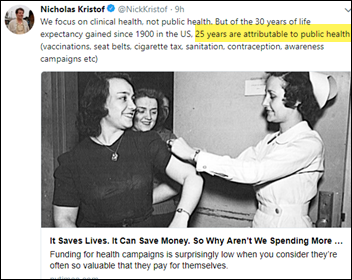 The New York Times questions why the US spends so little on public health efforts that often pay for themselves given the massive amount spent on healthcare services, concluding that: (a) companies can’t make money from it; (b) the government focuses on projects that offer more immediate benefits; and (c) people resent being told what to do even when it’s in their best interest. 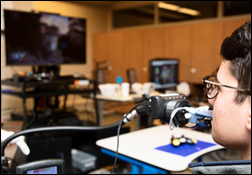 AI did a better job than dermatologists in distinguishing malignant melanomas from benign ones, researchers find.

The New York Times says health policy experts are insisting that taxpayers are paying twice for expensive new drugs – once in funding the drug’s development (via NIH grants) and then again when the drug hits the market at prices of up to hundreds of thousands of dollars. NIH did most of the work to develop the cervical cancer vaccine Gardasil and then licensed it to Merck, which sold more than $2 billion worth last year alone.