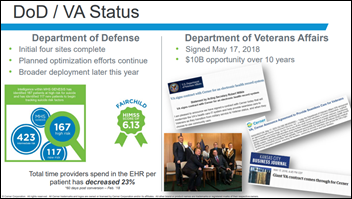 Burke said, “If you had an axe to grind with us and wanted to perhaps keep us from getting to a Veterans contract, and you’re one of our competitors, you might want to use some information negatively. There was some negative information out there.”

He didn’t specify whether the “fake news” involved publication of the DoD’s own internal assessment of the project or some other event.

Burke said that just keeping VistA running would have cost more than $20 billion in the next 10 years vs. the $10 billion the VA will spend on Cerner, so it’s a good deal for taxpayers. Chairman and CEO Brent Shafer, ,asked about what issues keep him up at night, answered, “The VA was keeping me up at night until last night. It was a good night last night,” but added that his big issue is retooling the company to move more quickly.

Cerner has posted the audio recording and presentation from the shareholder meeting. 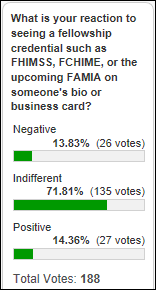 It’s an even split among the minority of respondents who care either way about someone’s use of fellowship credentials such as FHIMSS and FCHIME.

New poll to your right or here: what should the VA have done about an EHR? Show your work by clicking the comments link on the poll after voting and explaining.

This week’s “Wish I’d Known” question involves taking the first leap to overseeing the work of others.

President Trump will nominate acting VA Secretary Robert Wilkie to the permanent position, adding in Friday’s announcement at a prison reform event, “He doesn’t know this yet. I’m sorry that I ruined the surprise.” Wilkie is a former lawyer and White House security advisor.

Eastern Maine Health Systems (ME) ends its addiction treatment partnerships with two cities that named individual physicians – some of them present or former EMHS doctors – in their billion-dollar lawsuits brought against drug manufacturers and distributors. The city councils of Bangor and Portland voted to join the lawsuits, causing the health system to say that it will withdraw from any initiatives involving cities or counties that sue it.

I belatedly learned via a tweet that former UPMC CIO Dan Drawbaugh has since 2015 been CEO of orthopedic group The Steadman Clinic and its research institute in Vail, CO. 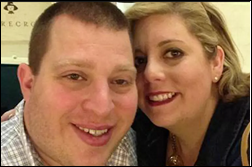 Weird News Andy says there’s “so much wrong” in this story, in which a former hospice executive pleads guilty for her involvement in a $60 million fraud scheme that also involved intentionally killing unprofitable patients as ordered by the hospice’s owners, a CPA and his wife (above). The former operations director says the owners ordered her to falsify EHR entries to admit patients who weren’t eligible for hospice services, fabricated “do not resuscitate” orders to avoid paying for ambulance trips when families called 911, and took patients off medications solely because they weren’t covered by insurance. The FBI’s search warrant says the CPA texted a nurse, “You need to make this patient go bye-bye.”

Medical residents at an hospital in India go on strike to demand better hospital security after the angry family members of a patient who died prior to planned gallbladder surgery beat up two doctors, a nurse, and a visiting relative of another patient who tried to stop the attack. The hospital realized afterward that it had never followed through with installing a security alarm as planned two years ago and says it will get that done.

Rainbow City, AL police arrest a doctor for breaking into the office of the medical practice from which he had recently resigned to steal six computers, a server containing patient information, and medical equipment. He opened the practice’s safe, apparently in an effort to make the break-in look like a robbery, but police immediately suspected him because the safe’s contents were intact, including cash and narcotics.