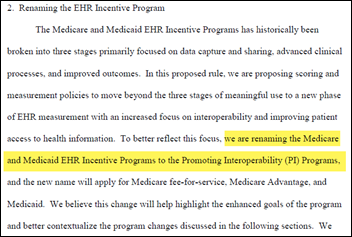 A proposed HHS rule would retarget the Medicare and Medicaid EHR Incentive Programs to “a new phase of EHR measurement with an increased focus on interoperability and improving patient access to health information.”

CMS proposes renaming the incentive programs to “Promoting Interoperability Programs,” noting that the word “incentive” is obsolete now that most payments have ended.

The rule would require using CEHRT certified for the 2015 Edition beginning with the 2019 covered year. It would allow a 90-day reporting period for 2019 and 2020. 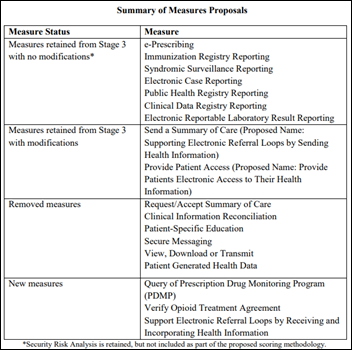 HHS also proposes two opioid-related e-prescribing measures for connecting to PDMPs and verifying treatment agreements that would be optional for the first year.

The proposed changes would also require hospitals to publish their charge master price list online every year, but asks whether more specific information might be useful to consumers, such as details on a hospital’s average discounted charges across all payers. HHS also asks if providers should be required to disclose a patient’s out-of-pocket cost for a service before performing that service, presumably to reduce surprise out-of-network charges.

The public’s comments about the 1,900-page document are due June 25. 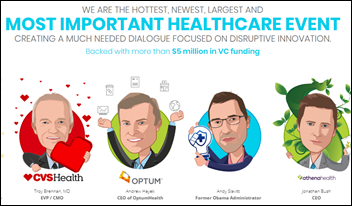 From Stealthily Healthy: “Re: HLTH conference. I’ve been asked a dozen times if I’m attending and I’m uncertain. What do you think?” Beats me. The speaker roster is huge, which I expect is because the VC-funded first-time conference used its cash to pay expenses and hype it up a bit. They’re also offering free provider registration hoping to give vendors their money’s worth in corralling prospects. I’m not sure anyone’s thrilled at going back to Las Vegas in early May after just leaving HIMSS there in March. The big question is whether it will do well enough financially to warrant a repeat next year. The conference claims it will create “a much-needed dialogue focused on disruptive innovation in healthcare” even though it’s run by two tech guys with zero healthcare experience and the track record of folks waving the “disruptive” flag without understanding what they’re disrupting isn’t great. We have way too many healthcare conferences, but fortunately for those offering them, way too many people willing to spend their employer’s time and expense money to attend them with questionable outcomes beyond glad-handing self-validation. Ironically, I would bet that high-accomplishment conference presenters didn’t actually waste their early-career time attending those same conferences.

From System CIO: “Re: HIStalk. It’s a really valuable read for me. I’m not one of those CIOs who is constantly networking with everything and everyone in our industry to keep up (primarily because there’s so much work to do and time necessarily spent focused inwardly) but HIStalk allows me to see/stay connected more broadly. Thank you for all of the time and effort you spend to make it what it is.” Thanks for making my day.

I’m getting good responses to this week’s question. I’m sure yours would be even better (hint).

Listening: reader-recommended The Prefab Messiahs, a barely-noticed early 1980s punk band that college students have rediscovered with their new album. It’s raw and I expected the typical garage band weak vocals, but they sound good when belting out wry, withering social commentary on songs like “The Man Who Killed Reality.”

I’ve seen video from recent conferences in which attendees were urged to hug each other, dance at their seats, or exchange high-fives, all of which seem not only to be crassly contrived, but straying way outside the comfort zone of many in the audience. I remember one hospital management event I attended where they hired a super-cheesy motivational speaker (some local guy who formerly played in an awful rock band with small talent and big hair) who demanded that we all “share” with our tablemates, which made me want to rip off his $2,000 suit and choke him with it. At the long-awaited end of his de-motivational speech, he brought up a slide of his wife and fake-cried about how much he loved her, leading all of us recent sharers to wonder what exactly we were supposed to do with that. Dear conference organizers and presenters – just do your presentation without expecting the paying audience to do anything except watch. Or just thrust your microphone Ozzy-style at the crowd and let them read the slides while you wiggle your hands approvingly as a conductor rather than performer.

May 9 (Wednesday) 2:00 ET. “How to Make VBC Work for You: The Business Case to Transform Into the Health System of the Future.” Sponsor: Philips Wellcentive. Presenters: Mason Beard, co-founder and chief product officer, Philips Wellcentive; Scott Cullen, MD, principal, ECG Management Consulting; Seema Mathur, director of strategy, Sage Growth Partners. How well is your organization funding its transformation to VBC? This free webinar explains how to achieve ROI as your organization transforms to meet the future. You’ll learn how VBC is impacting healthcare system management, three strategies for funding your transformation, and what the healthcare system of the future will look like.

May 29 (Tuesday) 1:00 ET. “Increase Referrals and Patient Satisfaction with a Smarter ‘Find a Doctor’ Web Search.” Sponsors: Phynd Technologies, Healthwise. Presenters: Joseph H. Schneider, MD, MBA, FAAP, retired SVP/CHIO, Indiana University Health; Keith Belton, VP of marketing, Phynd. A recent survey found that 84 percent of patients check a hospital’s website before booking an appointment. However, ‘Find a Doctor’ search functions often frustrate them because their matching functionality is primitive and the provider’s information is incomplete or outdated. Referring physicians need similarly robust tools to find the right specialist and to send the patient to the right location. Attendees of this webinar will learn how taxonomy-driven Provider Information Management improves patient and referrer satisfaction by intelligently incorporating the provider’s location, insurance coverage, specialty and subspecialty, and services offered that can be searched via patient-friendly terms. 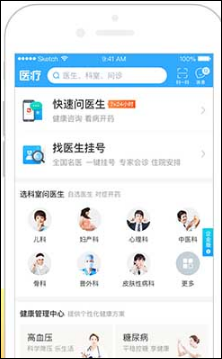 China’s largest Internet healthcare platform, insurance subsidiary Ping An Healthcare and Technology, plans a $1.1 billion IPO on the Honk Kong exchange. The 900-employee, AI-assisted service provides 370,000 free consultations each day and offers free, two-hour prescription delivery in major cities. Its network includes 3,100 hospitals and 7,500 pharmacies. Reports from a year ago suggested that investors were losing interest because of profitability concerns despite huge demand that is driven by dissatisfaction with China’s overwhelmed healthcare system. 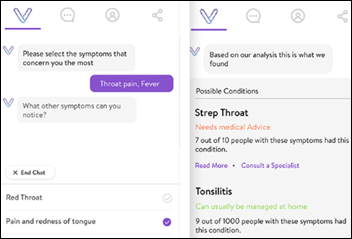 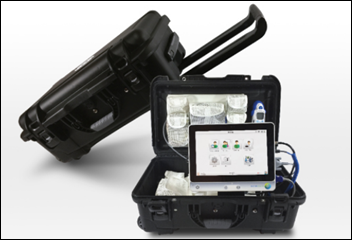 A small KLAS study on clinical process improvement finds that Stanson Health and LogicStream Health lead the way in analyzing clinician EHR use to optimize alerts and order sets, respectively, and identifying training opportunities for individual users. KLAS also finds that while many clinicians don’t trust the data presented to them or ignore recommended care guidelines and workflows, frontline doctors say that tools from Stanson and LogicStream are easily understood and useful.

The Senate postpones the VA secretary nomination hearing of Admiral Ronny Jackson, citing allegations of improper conduct in his military career that require further investigation. President Trump nominated Jackson via Twitter without the usual vetting process that would have resolved any confirmation issues outside the public eye. The New York Times says the issues were raised by anonymous White House associates of Jackson and involve his oversight of a hostile work environment, overprescribing of drugs, and claims that Jackson drank on the job. President Trump distanced himself in his reaction to the delay, blaming partisan opposition but admitting, “There’s a lack of experience.” He concluded, “If I were him, I wouldn’t do it.” 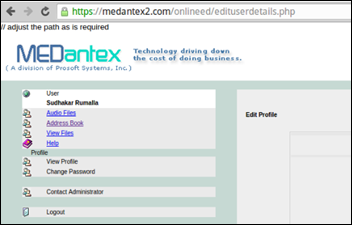 Kansas-based transcription firm Medantex takes down its customer web portal after security researcher Brian Krebs notifies the company that its audio recordings and site administrative functions were wide open to any Internet user. Medantex says it had been attacked by WhiteRose ransomware and apparently misconfigured the servers it rebuilt, exposing them to the world. I tried to pull up the company’s public webpage and was blocked by Bitdefender’s malware detection system. 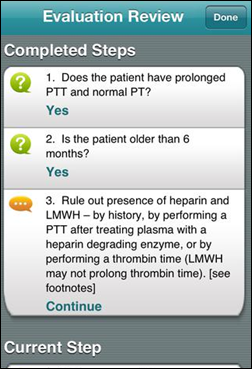 A small study finds that anticoagulation lab test and drug ordering improves when physicians use the CDC’s PTT Advisor app.

The family of Prince sues Trinity Medical Center (IL) for failing to correctly identify the counterfeit drug he had taken before the singer’s private plane made an emergency landing in Moline on April 15, 2016. They’re also suing Walgreens for filling his narcotics prescriptions that were written under his bodyguard’s name. Prince lied about his drug intake and refused all testing in the hospital in hopes of concealing his years-long addiction from the public, but the family says the hospital should have run extensive tests to determine that the black market drug he thought was Vicodin actually contained fentanyl. He died six days later of a fentanyl overdose. That’s the disadvantage of being a celebrity addict surrounded by sycophantic coat-tailers– your star-stuck doctor will write any prescription; your handlers will get it filled under their name and score illegal drugs to supplement when necessary; and you have enough time, money, and enablers to make addiction seem like a normal response to pain, stress, or disappointment.