GE Healthcare will exit the health IT market by selling its revenue cycle, ambulatory care, and workforce management software business to Veritas Capital for $1.05 billion in cash.

Veritas Capital’s previous health IT acquisitions include Verisk Health (2016, renamed to Verscend) and the healthcare unit of Thomson Reuters (2012, sold to IBM for double its acquisition price in 2016).

GE Healthcare joins previous healthcare IT acquisition-fueled dabblers (McKesson, Siemens, Misys, Sage) in wrecking a bunch of acquired companies and then cutting and running when the expected massive profits didn’t materialize. Or as I wrote a long time ago, “conglomerate vendors that seem to be happy milking the wrinkled, desiccated udders of their thinning herds of malnourished and badly aging cash cows,” to which I added further back in 2006, “ Healthcare IT customers carry little weight with toe-dippers. Are GE brass more worried about the flatlining former CareCast or sagging toaster sales at Wal-Mart? Does patient safety come up in Siemens corporate meetings as often as power generators?”

From Penultimate: “Re: EMRs as a research database. I looked at the article you linked to in your tweet about conglomerate vendors. That took me to the one where you predicted that EMRs linked to genomic data and social determinants of health would give drug companies valuable information they would be willing to pay for.” I forgot about that piece from 2006, in which I said, “Drug companies and device manufacturers need the data that lives in your clinical systems. How else will they be available to target research to a very narrow range of patient types, maybe even those with a rare genomic profile? It could help them identify appropriate research subjects, design post-marketing surveillance, study population-based outcomes, and catalog adverse events. The information you provide could either be de-identified or made available only if individual patients opt in. The benefit to patients is access to a wider variety of treatments and protocols, most likely free to them if tied to a research project.” Your inquiry led me to look at the other editorials I wrote long enough ago that I can enjoy them as something new. 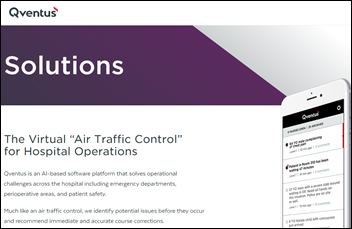 Here’s a Qventus intro video I found on YouTube.

Listening (and watching): “Long Time Running,” an outstanding documentary streaming on Netflix that covers the bittersweet 2016 farewell tour of Canadian rock band The Tragically Hip after singer-songwriter Gord Downie was diagnosed with terminal brain cancer (he died a year later). The super-talented group has been intact since 1986 and the members agreed early on to share all songwriting credits (a la the Doors) to avoid dissent. The band’s love of country and affinity with their fellow Canadians (including Prime Minister Justin Trudeau, who appeared in the film) was a joy to watch, albeit with envy.

I had a routine appointment with a specialist today and saw the usual pointless form entry repetition first hand. They copied my insurance card, but I still had to manually write the information down on their paper form. Same with my referring doctor’s information. Every form asked me again for name, date of birth, age, and current date (apparently nobody was able to subtract B from D to calculate my C). Form fields weren’t big enough for the information requested. I had to sign in on the clipboard upon arrival, and of course I could see every person’s name and doctor. Then after filling everything out – medical history, family history, meds, social habits, etc. – the MA in the exam room asked me the same questions all over again so she could enter it into the EHR. However, healthcare is so defiantly and illogically inefficient that this process seemed streamlined and sensible in comparison.

April 5 (Thursday) 1:00 ET. “Succeeding in Value-Based Care Via a Technology-Driven Approach.” Sponsor: Health Fidelity. Presenters: Adele L. Towers, MD, MPH, senior clinical advisor, UPMC Enterprises; Adam Gronsky, director of advisory services, Health Fidelity. Success in value-based care requires a thorough understanding of how risk-based payment models work. To prosper in this data-laden era of care, providers need to manage their patient populateeions holistically rather than through a collection of individual episodes and be able to accurately identify, document, and report risk scores. Given the stakes, is your provider organization adequately set up to take on and succeed in managing risk? In this webinar, learn how technology-enabled risk capture optimization is helping providers succeed in risk-based payment models. 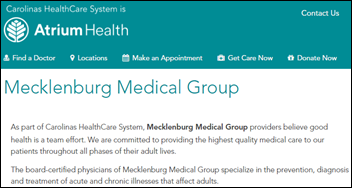 Ninety-two of the 104 doctors of Charlotte, NC-based Mecklenburg Medical Group sue Atrium Health (the former Carolinas Healthcare System) to leave the health system and operate independently following contract changes that reduced the practice’s RN staffing levels, centralized triage and reception functions at a call center, reduced compensation, and added a non-complete clause that prevents doctors from practicing with a 30-mile radius for a year after leaving. 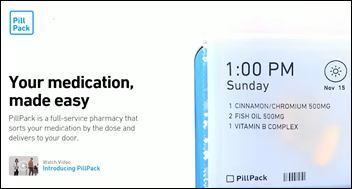 Walmart is rumored to be in acquisition talks with PillPack, an online pharmacy that packages individual doses into reminder packs. The rumored price is in the $1 billion range.

The Nashville paper confirms an item a reader submitted a few days ago – Microsoft is suing Community Health Systems for breaching its software licensing contracts. 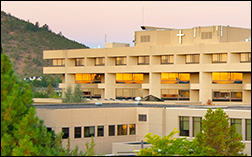 St. Charles Health System (OR) will go live on its $80 million Epic system next week, less than a year after choosing the company’s products. 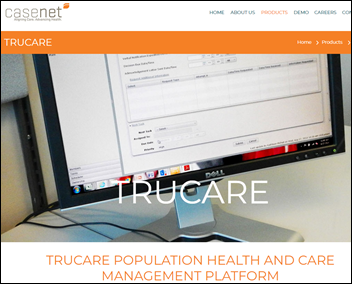 Politico notes that the State Department has issued an RFP for a new EHR. It was previously collaborating with the Coast Guard to implement Epic until that project failed. The State Department is specifically interested in how an EHR would provide shared services opportunities with the DoD and VA, which would seem to point to Cerner as the most likely choice among the few capable vendors.

Cloudflare launches 1.1.1.1, a brilliantly named DNS service that improves network performance and privacy (and maybe gain access to geo-blocked content, if that’s your thing). I’ve used DNS proxies before and they work fine, so I took a couple of minutes to set this one. It’s working invisibly, which is exactly what you would expect.

A Harvard Business Review article says the US spends too much of its healthcare dollar on low-value services that offer minimal clinical benefit, blaming: (a) limited effectiveness data for everything except drugs; (b) doctors make money from performing low-value services that they often can order themselves with payments protected by lobbyists; (c) patients lack the information to make their own decisions or to hold their doctors accountable. It notes that some high-value therapies are underused strictly because they are expensive, such as gene therapy and hepatitis C treatments. The authors propose using the capital markets to give insurers compensation when a patient’s early, expensive treatment results in savings for another insurer (like Medicare) down the road.