John Bardis, the former MedAssets founder who as HHS assistant secretary of administration signed off on the charter flights of long-time friend HHS Secretary Tom Price, resigns effective April 6. He says he always intended to serve just one year. Bardis’s responsibilities include the HHS CIO office.

Second in command in HHS to Bardis — and presumably the frontrunner to replace him in overseeing HHS HR, the CIO office, and Equal Opportunity compliance — is former technology executive and Trump campaign worker Jon Cordova, who just completed his two-week HHS suspension for his pre-election social media posts.

The Facebook posts written or shared by Cordova include calling Hillary Clinton a “slimy trailer trash huckster;” accusing the Clinton Foundation of paying Gold Star parent Khizr Khan to criticize Trump; making up sex scandal stories about Senator Ted Cruz; and sharing a doctored photo of a black man holding a sign reading, “No mother should have to fear for her son’s life every time he robs a store.”

From Cowtown: “Re: Microsoft’s March 15 copyright infringement lawsuit brought against Community Health Systems. Microsoft alleges that CHS stalled software audits for years and intentionally under-reported SQL Server usage by claiming only one-sixth of the production footprint. Maybe that’s not surprising when your CIO is Manish Shah, who was fired in 2002 from EMC for making his sales quota by falsifying invoices.” Shah joined CHS in 2013 after spending time at Aurora Health Care and no time in prison since he was never charged with a crime as far as I can tell and thus has never admitted guilt. I don’t have access to the filings to see what Microsoft is claiming.

From Clara Barton: “Re: the attached news item. This, apparently, is still a thing.” Indeed it is. An RN who presumably forgot to lock her car the night before wakes up to find her nursing license, laptop, and thumb drive with PHI on it missing.

Please tell me what you wish you’d known before being admitted to a hospital or seen in the ED. I’ve spent only one night in a hospital and that was a waste of time since nothing turned out to be wrong with me, but what I wish I’d known (not that it would have helped except as incentive to go elsewhere) is: 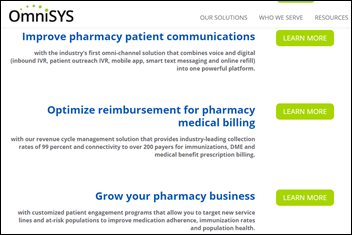 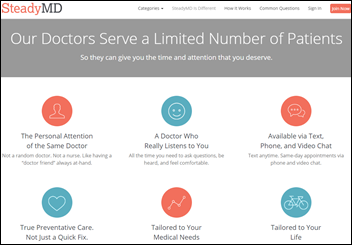 This seems to hit a lot of timely trends. SteadyMD raises $2.5 million for its online, concierge primary care practice. It runs eight practices, most of which are specialized (bodybuilding, LGBTQ, triathlon, etc.), but one of the practices addresses general health. SteadyMD patients meet their new PCP in a one-hour video visit, after which the company collects and stores all their medical records and makes the doctor available at any time via text messaging, phone calls, or video appointments. Membership costs $79 per month. The company says its doctors can prescribe, but doesn’t provide details of how that works.

Robert Redfield, MD will become director of the CDC. A 20-year veteran of the US Army Medical Corps, Redfield has spent the majority of his career on HIV/AIDS research and clinical care. 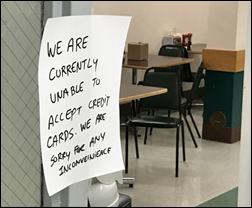 Finger Lakes Health (NY) is still recovering from a ransomware attack over the weekend that forced it to revert to paper-based processes and EHR backups. 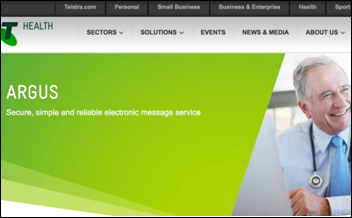 The 40,000 users in Australia of Telstra’s Argus healthcare secure messaging software are notified that their systems are vulnerable to outside attacks since the company always creates the same user account for remote access and then stores its static password in an unsecured text file. Telstra says hackers used the information to penetrate servers via Microsoft’s remote desktop protocol with full administrative access. One person who examined a breached server said it appears that medical information wasn’t stolen, with the hacker’s main interesting appearing to be using the servers to host dating scams and to buy items with stolen credit cards. I suppose Telstra is correct in calling its service “secure” even if its installation of it isn’t.

The threat of a negative patient Yelp review seems to hold more sway with physicians than educational campaigns encouraging them to reduce unnecessary prescribing of antibiotics. Physicians Working Together has launched a petition asking Yelp to remove negative doctor reviews. 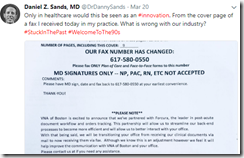 Danny Sands, MD, MPH assures his Twitter followers that the above fax from VNA of Boston to his practice announcing its transition from mail to fax is not an early April Fools’ Day joke. 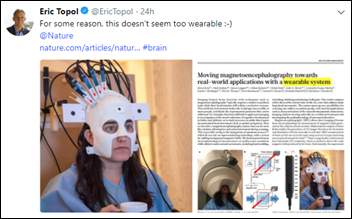 This contraption looks downright frightening, perhaps something that Michael Myers might have created for his Halloween activities as a Shatner mask replacement. I’m willing to bet the mug that the patient is so tightly clasping is filled with either calming tea or spirits.

A survey that asked consumers to name a famous female technology leader resulted in 92 percent drawing a blank and half the remainder naming Siri or Alexa, fueling the fire under the question of why virtual assistant voices are always female.