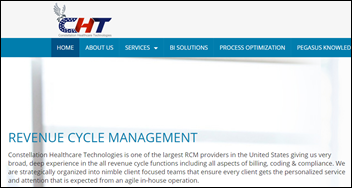 Houston-based RCM outsourcer Constellation Healthcare Technologies files Chapter 11 bankruptcy and will sell the business due to the servicing costs of the extensive debt it took on to fund its acquisition strategy.

The company says it fired unnamed executives who intentionally misstated its revenue and earnings.

A lawsuit filed in late 2016 claimed that CEO Paul Parmar masterminded a series of fraudulent acquisitions to allow him to falsify revenue numbers while misappropriating cash.

From Stern Countenance: “Re: Tronc. Mike Ferro is out as chairman following allegations of inappropriate sexual behavior. Justin Dearborn, one of his cronies from his Merge Healthcare days, will replace him. Ferro was already a jillionaire with the sale of Merge Healthcare to IBM plus he was rich before he joined Tronc. Ferro gets a $15 million consulting contract as a farewell gift. Now Justin gets to be a jillionaire, too. These guys are no dummies when it comes to money, including running Merge into the ground by slashing and burning to make numbers that looked good enough to get IBM to buy the company.” There’s another healthcare connection – Tronc (the former Tribune Publishing) is selling the Los Angeles Times to NantHealth’s Patrick Soon-Shiong for $500 million in cash. I interviewed Justin Dearborn in early 2014; IBM bought Merge Healthcare for $1 billion in mid-2015 to expand its Watson offerings.

From Obsidian: “Re: HLTH conference. Between JPMorgan and HIMSS I’ve seen 100+ billboards and ads for this new conference that’s supposed to be the greatest thing since sliced bread. What do you and your readers know about it?” The conference, taglined as “The Future of Healthcare,” will be held in Las Vegas May 6-9. They expect 2,000 attendees and will offer a smallish exhibit hall. The guy in charge is money guy and conference organizer Jon Weiner, who has zero healthcare experience in advocating for “disruptive innovation.” He has raised $5 million in funding to launch the conference. Among HLTH’s handful of sponsors are Change Healthcare, Optum, and UPMC. The massive roster of 250+ presenters includes the CEOs of Allscripts, Geisinger, 23andMe, Optum Health, Change Healthcare, Sharecare, Intermountain Healthcare, and Athenahealth. HIMSS (and its newly acquired Health 2.0) seems to have most of the bases well covered and JPMorgan is where the money guys and CEOs hang out, so I’m not quite sure how HLTH will convince people to spend another $1,850 registration fee and four days away from work to go back to Las Vegas (assuming most of its attendees will have just returned from HIMSS18). However, I shouldn’t underestimate the willingness of healthcare people to spend their employers’ money on conferences with questionable ROI to anyone except the attendee, who gains validation for getting his or her employer to foot the bill. Readers: are you going, and if so, what’s the draw beyond the HIMSS and JPM conferences?

I get excited by two Northern Hemisphere calendar days – the winter solstice on December 21 (after which daylight lasts longer every day through the summer solstice on June 21) and the spring solstice equinox (thanks for the correction) Wednesday, which is when spring officially begins. Actually I should add a third celebrated date that I call the HIMSS solstice, the last day of the HIMSS conference in which the crazy-busy health IT period that starts January 2 ends, replaced by a relatively lazy summer that lasts until Labor Day.

Charles Tuchinda, MD, MBA is promoted to the newly created role of EVP and deputy group head of Hearst Health and VP of Hearst. He will also continue in his role as president of Hearst-owned First Databank.

Diameter Health gives its clinical data management users the ability to track user-defined patient populations over time, with a sample use case being a health plan that wants to update its patient list with fresh HIE information on a specific schedule.

Healthcare sharing ministry Medi-Share will use payment processing systems from Liquid Payments. This is interesting mostly because of the business model of Medi-Share, which is run as a ministry but is effectively an insurer since its 375,000 members agree to share their healthcare bills that are discounted via Medi-Share PPO provider agreements. Faith-based plans, which don’t guarantee that they will cover medical bills and sometimes exclude preexisting conditions, require a pastor’s recommendation and the member’s pledge to avoid using drugs, smoking, and behaving immorally. The plans are not regulated.

Clinical Architecture releases Symedical on FHIR, a RESTful API based on the FHIR Terminology Service standard. 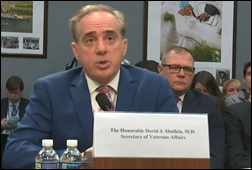 The VA’s Cerner project will cost $16 billion instead of the previously hinted $10 billion, according to comments made in a House Appropriations Committee by Rep. Debbie Wasserman-Schultz (D-FL). Cerner will get $10 billion (which is probably where the earlier figure originated), the VA will spend $4.6 billion on infrastructure improvements, and another $1.2 billion will be budgeted for third-party project management (Booz Allen Hamilton has already been awarded $750 million of that). Another tidbit dropped in a House Committee on Veterans’ Affairs hearing: VA Secretary David Shulkin had planned to announce during his HIMSS keynote that the VA’s contract with Cerner had been finalized, although continuing delays took that topic off the table. 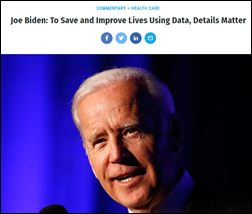 Former VP Joe Biden expands on the Seema Verma-Jared Kushner announcements at HIMSS18 in a Fortune opinion piece, recommending that:

The New York Times reviews the NIH’s $1.4 billion project to collect genomic, medical records, blood, and wearables information from one million Americans. The “All of Us” research program – still in beta testing — hopes to uncover new diagnostic and treatment insights, but hasn’t made much progress in its first three years even though its 2017 budget alone was $230 million. Geisinger gave back its $50 million participation grant because endless meetings and conference calls weren’t going anywhere, while Kaiser Permanente felt NIH just wanted its data without its insights so it passed, too. Both organizations are creating similar systems and so is the VA, which is making good progress for a budget of just $250 million over seven years. Researchers also say it’s hard because patient information is scattered across multiple provider EHRs and the US doesn’t have enough DNA sequencing machines to handle the load.

The US News “top medical schools” for research are Harvard, Johns Hopkins, and NYU, while the top three for primary care are UNC-Chapel Hill, UCSF, and University of Washington.

Epidemiologists are being robbed of their ability to track infectious disease activity by the shutdown of US local newspapers, which provide higher-quality information than social media.