Yesterday’s HIMSS was, for me, about interoperability in all its many forms. Health data exchange and its impact on physician satisfaction and patient outcomes were mentioned in every session I attended, the first of which was a phoned-in pre-brief with CMS Administrator Seema Verma ahead of her live session introducing the new MyHealthEData Initiative. The initiative aims to put patients at the center of their care by putting policies in place that will ensure they have control of their shareable health data. Verma shared her own frustrations with lack of access to her husband’s health data during his heart attack event last year. When pressed, his providers finally gave her five pieces of paper and a CD-Rom. “Why are we giving patients their records in these formats,” she half-jokingly asked, “when Tesla is sending sports cars into space?”

She stressed that putting data into the hands of patients will help the industry transition more quickly to value-based care. “Many of you have heard this all before,” she said, “but I’ve always been struck by how seldom patients are mentioned in talks of value-based care. We will not achieve value-based care until we put the patient at the center of our healthcare system – until they can make decisions based on quality and value.”

Though she didn’t offer any concrete timelines, she did lay out a number of related efforts: 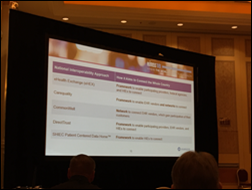 Given the recent HIStalk reader back-and-forth over CommonWell, it’s lack of market penetration (a founding company left and a friend in the HIE space tells me it’s expensive to become a member), and upcoming partnership with Carequality, I thought it might be a good idea to attend the afternoon session on how HIEs, CommonWell, and Carequality can work together. Led by Indiana Health Information Exchange executives John Kansky and Keith Kelley, it followed Mr. H’s rule of only attending HIMSS sessions with zero vendor presence. The hour-long presentation did a good job of bringing me up to speed on the important role HIEs play in making nationwide interoperability happen (some day), and the challenges they face when it comes to selecting their method of doing so based on the needs of their regional members. As one would expect, there’s no silver bullet; HIEs will ultimately need to leverage a combination of CommonWell, Carequality, the Strategic Health Information Exchange Collaborative’s Patient-Centered Data Home model, and the Trusted Exchange Framework and Common Agreement, which is still in draft form awaiting comments.

“The truth is it’s complicated and confusing,” Kansky said. “We don’t even have one common definition for interoperability. There’s an unsupported belief that one approach is the best approach. That’s not the case. Don’t believe your vendor when they tell you you only need one interop solution.”

My favorite part of the presentation came during the Q&A, when an audience member – presumably a vendor – asked if blockchain has any role in the HIE/interoperability conversation. The presenters didn’t mince words with their negative reaction, pointing out that FHIR, which the industry has been talking about for the last four or five years, is only just now being piloted by various organizations across the country. Not one person in the several-hundred member audience raised their hand when Kansky asked if anyone was using blockchain, and just one – from Humana – admitted that their organization was contemplating it. 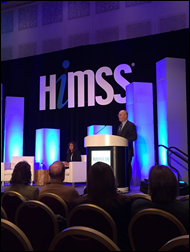 The interoperability theme continued during my last session of the day, a fireside chat between HIMSS North American Board Chair and Executive Director of the Georgia Health Information Network Denise Hines and National Coordinator Don Rucker, MD. As one would expect, the conversation was fairly high level and I frankly had a hard time paying attention given what I assumed was noisy casino activity on the other side of the wall. Topics ranged from ONC’s renewed dedication to open APIs and the evolving smartphone revolution in healthcare, patient-centered care, and the need to eliminate info-blocking to move interoperability along. Rucker also addressed some of the 250 comments ONC has received on TEFCA, which should be finalized in late spring. Top of mind on the comment pile are the issues of consent, how the framework will address differing state regulations, and what coordinating entity or collaborative will be put together to oversee it. 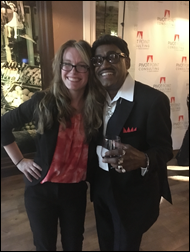 All that talk of frameworks, APIs, and info-blocking had me in need of some Vegas frivolity, so I stopped by Pivot Point Consulting’s party for a quick sec to enjoy some time with Elvis and the Rat Pack. Where else but HIMSS can one sidle up to Sammy Davis, Jr.? More to come tomorrow.