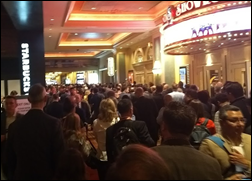 Today started with a traffic jam near the Treasure Island in trying to take a Lyft to the convention center, followed by a deadlocked mass of humanity simultaneously navigating the convention center halls. I seriously worried that we might have crush-related injures or deaths like at the Hajj, where too many people and too few crowd control experts create situations in which you are first carried along helplessly by the Brownian-type collective movements of everyone around you, then smothered when your chest doesn’t have room to expand to allow breathing.

The big news of the day came in a scheduled session with CMS Administrator Seema Verma that included a surprise guest in White House Senior Advisor Jared Kushner. They vowed to address EHR interoperability by using CMS payments to punish information blockers; to streamline EHR incentive payments; and to expand the Blue Button project (which you don’t hear much about these days) to an API-powered 2.0 version that gives patients greater control. The Kushner-led MyHealthEData effort will focus on giving patients access to their own data. 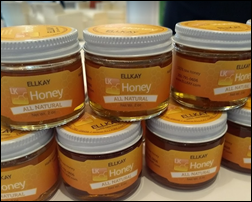 The Ellkay folks were giving away honey harvested from their rooftop hives. They brilliantly package it in jars of a size that pass TSA checked luggage restrictions. I had a fun chat with co-founder Kamal Patel over an delicious afternoon “Ellkay special” drink made from bourbon, the honey, peach schnapps, sweet and sour mix, and probably other ingredients I didn’t notice (lots of booths had happy hours today). Ellkay (“Healthcare Data Plumbers”) is a great success story, started when Kamal got laid off from his programmer job and had to figure out how to cover his family’s bills. 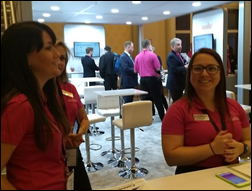 I noticed that the Voalte folks have progressed from their early-day pink pants to pink shirts. They said they still enjoy wearing pink whenever the occasion calls for it. I also learned that the name Voalte comes from Voice, Alarm, and Texting, the platform’s original capabilities. 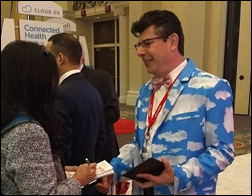 An interesting jacket choice from NextGate. 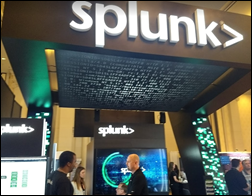 Splunk is a great company name. I assume they do something that might conjure a vision of “spelunking,” but the clever name was wasted since I couldn’t get their booth people to come up for air from talking to each other to give me a glance. 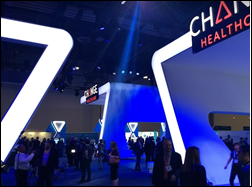 Change Healthcare’s booth was imposingly massive. So much so that I didn’t really want to enter their soft-carpet space. 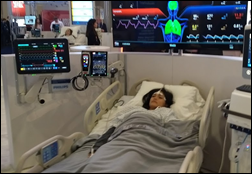 I hope this poor girl was OK, brought back to health by all the doctors and nurses who, surprisingly, looked like salespeople wearing scrubs. Surely nobody would pass themselves off as a clinician knowing that real clinician attendees (and thus prospects) won’t appreciate having their profession reduced to an exhibit hall costume. I’m at least happy that I didn’t see any provocatively clad women straying into booth babe territory. 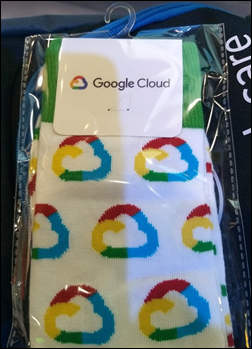 The most personable booth rep I met all day was Sohail from Google Cloud. We had a nice chat and then he disappeared to bring me back a surprise gift of these cool socks.

GE Healthcare did a five-minute overview stage presentation, then invited audience members (of which I was the only one) to try a hands-on demo. Unfortunately it was really confusing, and neither the booth person nor I could figure out what we were supposed to do. Maybe that says something. They did mention “digital twin,” a problem detection concept I keep hearing more about. 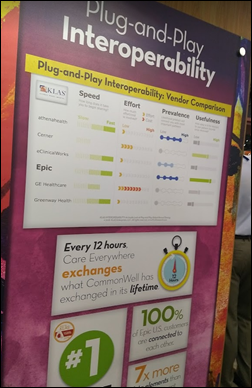 The Epic rep who engaged me was really friendly. As a reader predicted, the company’s non-marketing team had already turned the just-released (and controversial) KLAS interoperability report into a big wall poster. They get mileage out of the large sums they pay KLAS. 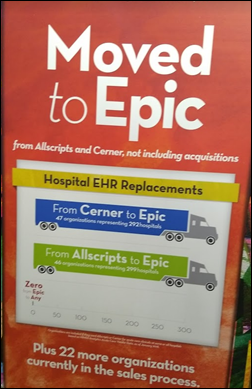 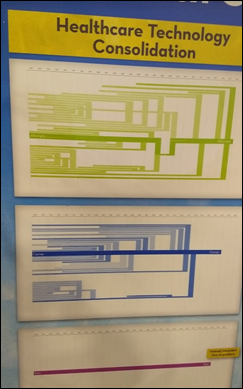 More Epic posters. The second company family tree one shows how Allscripts and Cerner have grown by acquisition and product integration, while Epic has acquired nobody and developed all its own software. I asked the Epic guy how they got so good at posterizing competitive information and he said they just developed internal expertise with practice. They even had images of all of the several posters on their walls collected into a handout. Those strong visuals are the most effective items I’ve seen at any HIMSS conference. 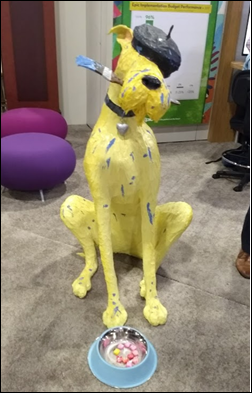 Epic art, of which there was a lot, was all wacky. 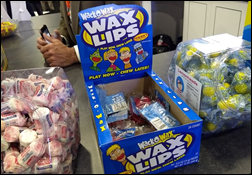 MedData can’t bake scones in Las Vegas, so they had retro candy like Necco Wafers and wax lips. 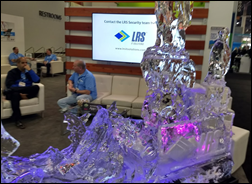 This was a real (and real big) ice sculpture.

Allscripts finally unveiled the former Care Otter skunkworks EHR project that is now named Avenel (the name means nothing, according to the booth person I asked). It’s a tablet-only EHR (and IOS-only as well) that connects to the cloud-based back end with a single desktop used to maintain the system. The “machine learning” claim refers to the system’s “surfacing” of relevant information and workflows as driven by observed user behavior rather than by creating a rigid user template. It was quite tablet-y in a way that doctors will likely enjoy once they get used to the idea that an open encounter is not required to bring up a task list or perform maintenance. It’s pretty cool, but it’s early in its life cycle and I guess it would need to be paired with a locally hosted PM system. At least they’re building something new and it looks like something docs would love – it reminded me of Medicomp’s Quippe, which had the same friendly, intuitive tablet-powered documentation system running several years ago.

A reader asked if Allscripts was demoing Paragon and Paragon Ambulatory. I asked the company’s booth desk people and they didn’t seem to know what Paragon is. They claimed unconvincingly that it was being demonstrated somewhere this week, but offered no particulars. 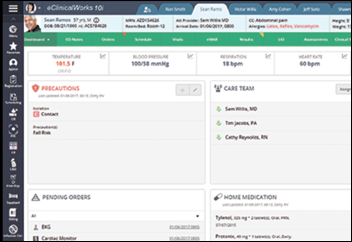 Someone at the EClinicalWorks booth gave me a demo of 10i, the company’s new hospital EHR that costs $599 per bed per month. I’m impressed – I took the rep off script in asking to see functionality with which I have a lot of experience (pharmacy, lab, etc.) and it was remarkably deep and broad. It shares a single database with ECW’s ambulatory solution and will provide even hardcore modules such as LIS, blood bank, RIS, and anesthesia documentation and OR management. They have around 20 hospitals that have signed letters of intent to get in line once the initial sites shake out the inevitable problems. ECW 10i looks like a potentially strong competitor to small-hospital systems and has been architected to handle larger ones. Worth watching.

Someone asked me who’s giving away sunglasses. Talk to Vyne Medical down in Hall G. 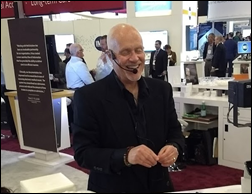 I was truly happy that Cantata Health lured the semi-retired but still magnificently entertaining Bob Garner back to their booth. I’ve seen his sessions at least a dozen times, and while he makes me laugh harder than just about anything, some of his shockingly accurate and personal insights (he says he’s not psychic, but I wonder) cause tears from attendees who weren’t expecting to be so profoundly affected. I urge you to trust me and go see what he does. He is always the high point of my HIMSS experience. 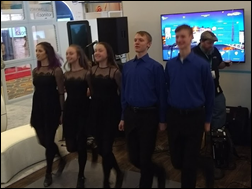 Ireland-based Oneview Healthcare had the best themed entertainment I’ve ever seen at a HIMSS booth – a good Irish band, a local Irish dance troupe, and Guinness on draft. The HIMSS police wasn’t happy with the band’s volume, however, and was threatening to shut them down as I moved on. I like that the company proudly embraced their heritage with a fun program. 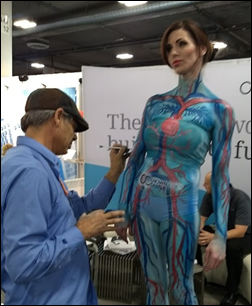 I’m not exactly sure what was going on right around the corner from our Hall G booth. I averted eye contact since I can’t imagine this is a job that either of the folks pictured would go home and tell their kids about. 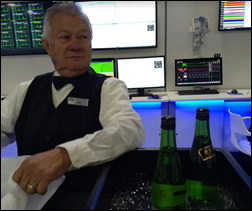 Our booth neighbors Nihon Kohden were pouring sake, which was a HIMSS first for me. Brilliant, and as in Oneview’s case, culturally relevant. 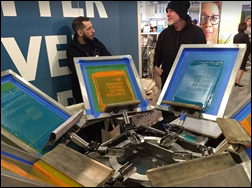 Kudos to NextGen Healthcare for a cool booth idea. They brought in local artists who imprint goodie bags with your choice of design. Inside is a card from Las Vegas’s Three Square Food Bank, to which NextGen donates a matching bag filled with food for underprivileged children. 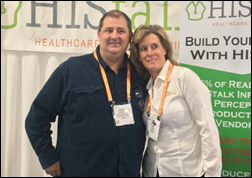 Grahame Grieve is one of our favorite people, the humble father of FHIR who isn’t really a health IT cheerleader as much as he just wants to do the right thing for patients. Lorre said he was being approached constantly like the rock star he is, yet he just went about his business like he wasn’t worthy. I think she was rejuvenated by his altruism that is refreshing among a glut of glory-seeking behavior.

Hall G is actually a fun and easily navigated space, much better than I cynically predicted. The challenges are (a) the absence of anchor tenants, who are all upstairs; and (b) the nearly invisible stairwells that lead down from the main hall level. It’s easy to find Hall G if you are on the ground level of the lobby (it’s near HIMSS Bookstore), but it’s maddeningly hard to find the down escalators from the upstairs exhibits (hint: look between the Cerner and Allscripts booths). I also felt like a rat in a maze upstairs when trying to find the exit doors – like the casinos, they don’t make it easy to walk away.

I strolled Hall G and here’s why it’s worth the trip downstairs. It’s really easy to navigate, with mostly straight aisles that aren’t broken by huge booths. The booths are modestly sized and you see more vendors in fewer steps while still seeing giveaways, happy hours, etc. The people seem friendlier and less frantic, both exhibitors and attendees. Best of all, the companies there have more focused product lines and it’s easy to decide which ones to visit purely from their signs. It’s like HIMSS conferences used to be before they got out of hand.

Thanks to the many attendees who dropped by to say hello at our little Booth #11228 even though it was not the easiest to find. I’m rethinking the idea that our location is super important since today’s experience suggests people will seek us out, a luxury that vendors don’t necessarily have.

I’ve had a long day, and since it’s after 11 p.m. as I write this, I suppose I should go to bed in preparation for another long day tomorrow.