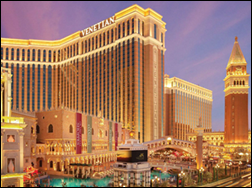 For those living on other healthcare IT planets who aren’t already aware, HIMSS18 kicks off this week. The screwy Las Vegas schedule has the full conference starting on Tuesday (since hotels won’t give up their weekend casino revenue for the usual Monday morning start), so the week looks like this:

I will abandon the usual HIStalk format this week and instead will post daily reports from Jenn, Dr. Jayne, and me about what we see or hear. Email me if you see something I should check out. 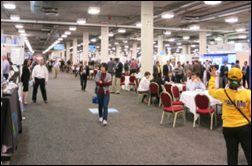 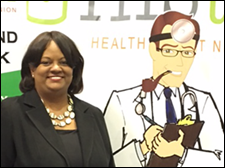 Please visit us in Booth #11228, which can be reached by descending with justifiable trepidation down the well-disguised stairs to the lower level that looks like an IRS cubicle farm and then trying to find our microscopic booth by number in the bizarre layout. You won’t get rewarded for your trouble other than with gratitude and friendly conversation among our magnificent furnishings (total cost: $300, dragged in a beat-up, garage-stored duffel bag from one HIMSS to the next). That is, unless you want to take a selfie with the life-sized Smokin’ Doc, which people love to do for some reason (including the 18th Surgeon General of the United States, Regina Benjamin, MD, at HIMSS17 – the pipe must have puzzled her).

I made it a point at HIMSS12 and HIMSS16 to spend a full day cruising Hall G and writing about what I saw there because I felt sorry for the companies whose HIMSS hopes and dreams were crushed by low booth traffic for which they paid dearly. There’s likely quite a bit of innovation happening down here in the catacombs, so give those companies a look and wish them the success that will allow them to pay the necessary financial homage to HIMSS to get promoted to the main show floor in the HIMSS21 return to Las Vegas.

Actually, we are giving away one pretty cool thing in our microbooth – the ever-popular Conference Survival Kits that we always make available with the folks from Arcadia (Booth #4221). The tastefully understated black bag contains essentials like Wet Ones, antiseptic cleaning pads, antacids, Band-Aids, breath mints, and Blistex. Perhaps we should play Arcadia Bingo to see whose misadventures cause them to use the highest number of the items before leaving Lost Wages. 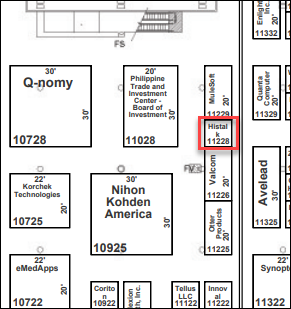 Our booth, almost drawn to scale. I’ve never heard of any of our booth neighbor companies and they probably haven’t heard of HIStalk. I’m secretly hoping that we get a lot of visitors while they’re standing around wondering what exactly we do.

I challenged Lorre to come up with something (anything) to put a positive spin on what I expect to be a lackluster HIMSS18 exhibiting experience. She’ll offer a first-year deal to any of our fellow Hall G outcasts that sign up as new sponsors, which gives them full-year exposure for a fraction of the cost of three days in the HIMSS basement. I decided to call it the “Cellar Dweller Special.”

My HIMSS guide describes what my sponsors will be doing there, including stuff they’re giving away and anything special they’re doing for HIStalk readers.

The Meditech folks seem to always run into Boston weather-related travel delays that cause them to arrive late to the conference. This year looks like more of the same, as severe weather has caused thousands of flights to be cancelled in Boston, Philadelphia, and New York. Hopefully the flight backlog will be cleared for Sunday and Monday HIMSS18 travelers. It’s stressful enough to arrive early as I always do, so I can’t imagine getting there later than expected. 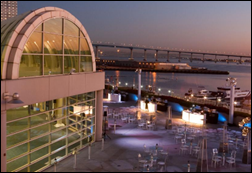 From Unconscious Power: “Re: HIMSS18 opening reception. First timer. Should I go?” I’m not qualified to opine since I almost never go – it’s too early in the week to be crushed in the wave of glad-handing humanity. I’m at least glad that HIMSS did away with drink tickets and upped the food game a bit, although the entertainment is always generic Disney-grade. It will surely be better than the first return to Chicago, when it was a half-mile hike to what looked and sounded like an airplane hangar as the blizzard raged outside. The best opening receptions were always in San Diego, out on the convention center’s patio overlooking the bay.

From Sheetal Shah: “Re: your tiny HIMSS booth. Be proud of that 100 square feet! As a startup, we went for the 0x0 booth this year and decided instead to become an HIStalk sponsor!” Sheetal is VP of SymphonyRM and I appreciate the support. It’s a struggle for me to decide between 10×10 and 0x0 since our little booth will end up costing something like $7,000. We’ll see what locations are available at HIMSS19. We usually end up, at best, by the restrooms and loading dock.

Seventeen percent of male poll respondents and 38 percent of females say they’ve experienced unwanted sexual attention or comments during a HIMSS conference. Here is my personal challenge to you for next week. If you see someone behaving badly, observe an attendee being made uncomfortable, or see someone who has over-imbibed in a compromising situation, don’t just walk away – get involved as tactfully as possible. I would also suggest that women consider downloading one of the personal safety apps that allow them to send their location to a friend, send a message with a single tap asking a friend to call them to get themselves out of a situation, or issue an SOS if they don’t get to their destination by the expected time. Get a handful of HIMSS colleagues in your circle and these apps will provide peace of mind and maybe more. Remember that unlike Orlando and former HIMSS cities, we’re sharing the Strip with a lot of shady people who know we’re tourists from our badges. I would also enjoy having someone who makes a gender- or sex-related comment within earshot of a bystander get taken down a notch for their boorish behavior, so tell me if you get to see that.

New poll to your right or here: What OS does your most-used smartphone have?

Thanks to those who responded with insightful answers to  “What I Wish I’d Known Before … I Quit My Job to Go to Work for Myself.” I’m saddened that folks who love working for themselves are being pushed back into working for someone else because they either can’t get health insurance at all or it’s too expensive as a one-person company. It’s ironic that even health IT experts are having their entrepreneurial ambitions dashed by our screwed up health system.

This week’s question: “What I Wish I’d Known Before … Taking my First Hospital IT Executive Job.”

Thanks, too, to long-time HIStalk supporter PeriGen, which has upgraded its sponsorship level to Platinum. They just announced that Qualcomm Life will resell their AI-powered Vigilance early warning system for OB. 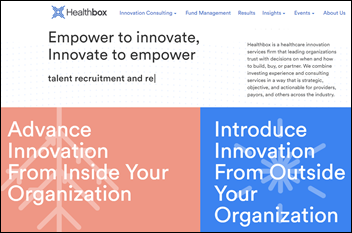 HIMSS acquires Chicago-based business accelerator and venture fund manager Healthbox in its never-ending and sometimes puzzling expansion. Healthbox’s CEO is Neil Patel, who used to work with HIMSS President and CEO Hal Wolf at The Chartis Group. Patel joined the company in September 2016 after founder and CEO Nina Nashif left for unstated reasons (one might be that healthcare IT has too many poorly run startups being pursued by a surplus of underachieving accelerators that offer them little value). This is another example where some vendors that pay a lot of money to support HIMSS now find themselves competing against it. 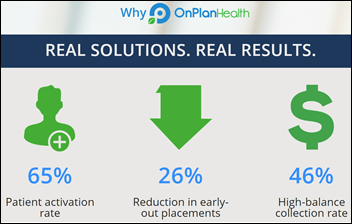 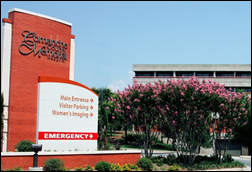 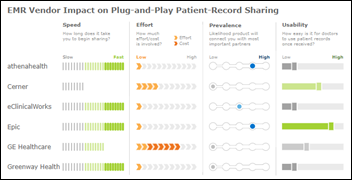 A new KLAS report on plug-and-play EHR data-sharing capabilities concludes that it’s: (a) automatic for Athenahealth and Epic customers; (b) nearly so for EClinicalWorks; (c) limited for Cerner because of poor CommonWell adoption, at least until the CommonWell-Carequality connection is in place; (d) uncommon for GE Healthcare and Greenway Health users; and (e) not offered by Allscripts, Meditech, and NextGen. Epic and Athenahealth offer the highest likelihood of being able to connect to important partners, while Epic and Cerner offer the best doctor usability of the retrieved patient records. KLAS did the report because CommonWell’s hype that downplays its poor adoption has created distrust:

Most CommonWell EMR vendors require their customers to onboard one at a time, and only Athenahealth has driven adoption in mass. This is even true if you are using Cerner, who has been one of the most valiant and prominent CommonWell promoters. Because sharing among Epic customers is already universal, when CommonWell connects to Carequality, the entire Epic base will become available, creating instant value for most areas of the country. CommonWell will likely see a significant adoption increase with a solid Carequality connection. Since its launch five years ago, the tendency to overmarket the level of adoption of CommonWell has created apprehension and a lack of trust among potential participants and prompted this report, showing a snapshot of providers’ success. 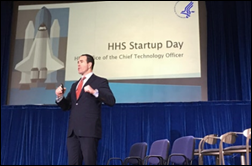 A study led by the co-creator of the Bedside Pediatric Early Warning System (which was commercialized by Toronto’s Hospital for Sick Children) finds that use of the system did not decrease mortality or ICU resource utilization. An accompanying editorial by Memorial Sloan Kettering’s critical care medicine chief says that perhaps holding the system to an all-or-none mortality standard is unreasonable. He concludes with an appeal for AI-powered hospital informatics systems:

Now is the time for hospital leadership executives, medical informatics departments, interested clinicians, informatics vendors, and governmental-certifying bodies to move forward and apply artificial intelligence systems to the hospital setting to enhance processes of patient care and outcomes. Such informatics systems, which are broad in their data capture, analysis, learning, and therapeutic recommendations, are being developed … These programs should be welcomed into inpatient and ICU care to allow investigations to move away from single intervention-based studies, with simplistic but easily accessible primary outcome measures such as mortality, to a more technologically based approach to understanding health care data and studying therapeutic interventions. 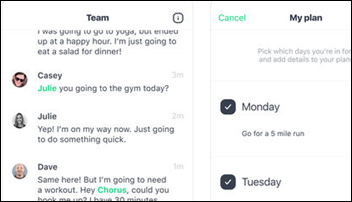 Chorus, the fitness app and group encouragement tool started by former Twitter CEO Dick Costolo, shuts down after just eight months. The company ran into the Abstinence Violation Effect, in which people stop participating in their support group after they fail to meet its agreed-on expectations, such as missing a planned exercise session. He also found that people lost interest in motivating each other. Maybe Dick should have learned about dubious Internet comradeship from Twitter, whose never-ending stream of trolls, bullies, bots, and psychopaths similarly drive users away.

Without the usual HIStalkapalooza pomp and circumstance, here are your 2018 HISsies winners. Congratulations and/or condolences to those that were chosen by my readers.