Researchers looking at how hospital bond ratings fared after implementing a new EHR find that of the 32 health systems studied (with a focus on Epic), seven had their bonds downgraded, seven had them upgraded, and 18 had no changes. They concluded that it’s tough to prove any relationship between EHR implementation and the macro financial picture provided by bond ratings, even though ratings announcements often reference either the cost or the financial benefit of a new EHR.

As is nearly always the case, it’s not what you buy, but how you implement it and what you do with it afterward that counts.

Epic’s touting of post-implementation hospital financial improvement was likely the genesis of the article since it focused on Epic.

From Brian: “Re: vendor clueless marketing. So the HIMSS conference has been around for only 18 years? Didn’t anyone edit this press release before editing it?” I’m omitting the vendor’s name because the marketing person who wrote the release has a long health IT background, so I’m sure it was just one of those embarrassing synapse-jumps that we all have rather than a lack of knowledge. While the conference is indeed HIMSS18, this is the 57th iteration since HIMSS62 in Baltimore, when there was no such thing as healthcare IT, no exhibit hall, and just two dozen skinny-tied hospital management engineers having about as much crazy convention fun as you would expect.

From Go-Live Concerned: “Re: Epic. Has at least eight go-lives in March, some of which are multi-facility big bang. Epic has to support them and most customers also share the same third-party vendors, who are stretched to the max. Document imaging and coding vendors, for example, have to staff up to deal with the increased support volume. Epic’s remote-hosted data center will see a 4-5x increase in live systems in just a few days. If the lights dim in Madison, we’ll know why.” 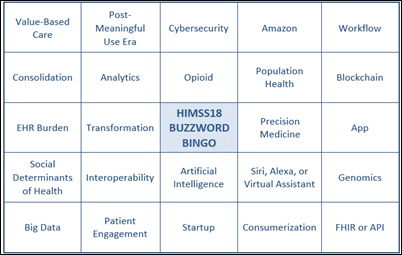 Dr. Jayne’s HIMSS18 Buzzword Bingo inspired me to create my own version. See if you can you call bingo (horizontal, vertical, or diagonal) during the opening session, during the first 30 minutes in the exhibit hall, or in a single vendor’s quick pitch. If you need an added difficulty factor – which you probably will since it will be a target-rich environment – then see if you can get bingo purely using only overhead-dangling booth signage. Or, see if you can fill out the whole card from a single vendor. I arranged the options randomly, but I’d bet money that the easiest bingo would be from the lower left corner diagonally up. Regardless, you’re gonna need a bigger stack of cards. 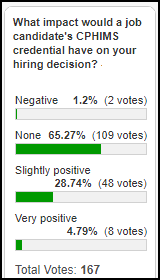 Poll respondents say their hiring decisions wouldn’t be swayed much by a candidate’s CPHIMS credential. My conclusion has always been that if two candidates were exactly equally desirable (which basically never happens if you’ve done due diligence), then maybe it would offer a tiny edge as evidence of personal drive. A lot of the folks I know with CPHIMS hoped that earning it would offset their lack of experience or get them into the field as newcomers, neither of which seems likely.

New poll to your right or here, repeating one I ran awhile back: Have you experienced unwanted sexual overtures or comments during a HIMSS conference that made you uncomfortable? 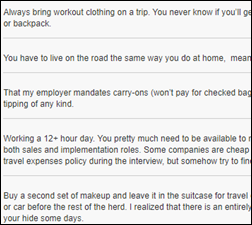 Responses to “What I Wish I’d Known Before … Taking a Travel-Heavy Job” range from the practical to the heart-wrenching. When I worked for a vendor for a short time, business travel seemed exotic and carefree to those of us shoehorning like astronauts into our cubicles every day under management’s clueless but ever-watchful eye. Still, I noticed that the road warriors who I was occasionally sent out to support seemed unusually world-weary, cynical, and quick to hit the hotel bar. They avoided the sometimes miserable office conditions, but also didn’t really even seem part of the same company (except to our customers) since most of us hardly every saw them. They also rarely got promoted or taken off the road since replacement roadies were hard to find. Reading the responses makes me glad that I only traveled heavily for a few months when I worked for a large, regional health system, where I had it pretty easy in visiting the same handful of rural hospitals for just a few days at a time as a colleague instead of a vendor. Remember these comments the next time someone from several states away shows up bright and and outwardly cheery on Monday.

Next up and anxiously awaiting your response:  What I Wish I’d Known Before I Quit My Job to Go to Work for Myself. I’m interested in what you have to say even if you eventually ended back up as someone else’s employee. People always fantasize about becoming part of the gig economy, so help them out with good or bad firsthand experience. 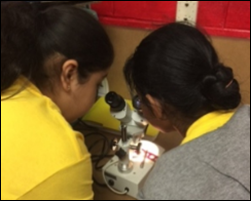 Iatric invited me to get on a short conference call with their HIMSS booth staff to review some of my “Tips for HIMSS Exhibitors,” something I don’t ever do except Iatric was smart in offering up front to make a significant donation to DonorsChoose in return for a few minutes of my time. Their donation, paired with matching funds from my anonymous vendor executive and other matching sources, funded every penny of these teacher grant requests:

Several of the teachers emailed me within a couple of hours, one of them Ms. F, who said, “Thank you so much for funding my students in their efforts to learn more about the women who changed history. This package was funded in such a timely manner in that Women’s History Month is in a few days. We are so grateful for your support. It is because of donors like you that we can take learning to a whole new level.” 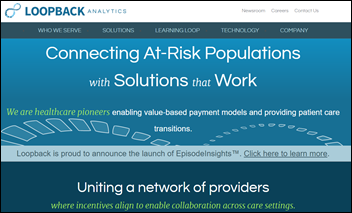 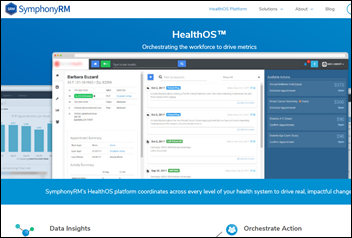 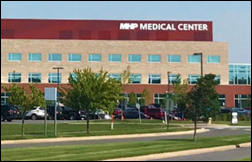 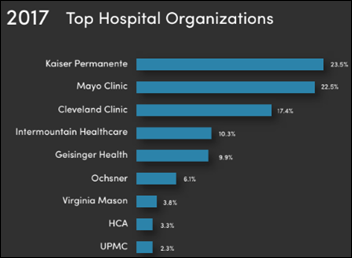 A new Reaction Data survey of health system leaders finds that the most-named health systems for innovation, thought leadership, and providing quality care at a sustainable cost are Kaiser Permanente, Mayo Clinic, Cleveland Clinic, Intermountain Healthcare, and Geisinger Health. KP led by far in recognition for providing high-quality, cost-effective services. It’s interesting that other than KP, those highly regarded systems haven’t shown a lot of interest in expanding beyond their own regions as opposed to less-regarded but ambitious players such as Ascension, Trinity, and Adventist. I think most of us would love to have one of the top three systems add a hospital near where we live.

Politico reports that the VA could sign its Cerner mega-deal as early as this week. Both parties have agreed to 50 minor contract changes that were recommended in Mitre’s interoperability evaluation.

For Bitcoin fans: analysts speculate that a single low-profile startup in China that sells bitcoin creation hardware is raking in up to $4 billion per year in profit. 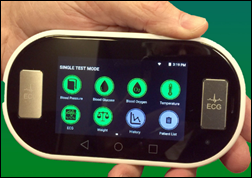 Indiana-based VoCare develops a self-contained home care device that measures blood pressure, blood glucose, pulse, oximetry, temperature, and ECG, running on Android to connect via WiFi, Bluetooth, and 4G LTE in uploading readings automatically to a cloud storage system. The only peripheral needed is the supplied blood pressure cuff. It has a provider mode and also an option to be used for remote patient monitoring.

A JAMA opinion piece observes the stress that opioid reduction programs have had on PCPs: having to confront patients to reduce their opioid use; kicking them out of their practice after implementing a no-opioids policy; trying to migrate patients to alternative pain drugs without a lot of knowledge or patient enthusiasm; trying to stay on top of increasingly complicated drug plan prescribing rules; and dealing with insurers that are willing to pay only for more addictive opioids because they are older and therefore cheaper. The article says the opioid crisis is due to inadequate chronic pain control and recommends further education, including telementoring clinics offered by Project ECHO (where two of the authors work).

Martin Shkreli must be rolling over in his cell. Rare-disease patients treated with a 1960s drug whose price was jacked up from $650 to $21,000 in just eight years became excited that a generic was coming out, but only until they saw the price: $18,000, still 28 times what it cost in 2010. Experts note that despite FDA’s call for competition, it’s tough to bring a drug’s price down from stratospheric levels when the Wall Street-pandering newcomer recognizes that the market will bear a slight-lower price, especially when the manufacturer covers the co-pay of patients and leaves insurers stuck with most of the tab. To make it even weirder, the original manufacturer, faced with this slight competition, rolled out its own generic priced at $19,000.

In other pharma news, states are acting to restrict pharmacy benefit management companies from inserting gag clauses in their contracts with pharmacies that prohibit pharmacists from telling customers that paying cash for their prescription would be cheaper than using their insurance. Pharmacists complained that PBMs pocket the difference from the patient’s overpayment. The drug lobby has filed suit to block a North Dakota law that bans such gag orders, saying it requires PBMs to disclose “proprietary trade secrets.”

A academic medical center study published in JAMA finds that it costs $20 to perform the billing and insurance activities required for a primary care visit and $215 for an inpatient surgical procedure, representing 3-25 percent of professional revenue. Eric Topol’s tweet says it all. 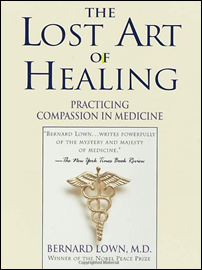 A medical resident’s New York Times op-ed piece describes treating the eminently influential 96-year-old doctor and Nobel Peace Prize winner who in 1996 wrote a book that not only warned against overuse of technology and excessive drug prescribing, but also observed that “healing is replaced with treating, caring is supplanted by managing, and the art of listening is taken over by technical procedures.” Hospitalized in a system even more impersonal than he could have imagined 22 years ago, he wasn’t happy with the lack of progress:

Each day, one person on the medical team would say one thing in the morning, and by the afternoon the plan had changed. I always was the last to know what exactly was going on, and my opinion hardly mattered … Doctors of conscience have to resist the industrialization of their profession.