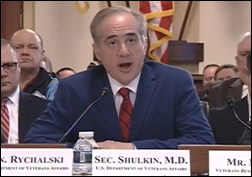 From Ticklish: “Re: opioid crisis. This article says it’s caused by a lack of interoperability. Think so?” Of course not. Short-sighted healthcare people forget that prescribed, FDA-approved opioid drugs make up just part of the available smorgasbord of narcotics, and in fact, their higher cost and reduced availability is pushing users to cheaper, more easily obtained forms that doctors and hospitals don’t control. I’m not convinced that anything can stop the use of drugs by determined people, but if there is a magic bullet, I’m certain it isn’t prescription databases, cracking down on supply, or mass incarceration. And while everybody was focusing on Oxycontin, crystal meth usage has returned with a vengeance lately with purer, cheaper product available everywhere, so now there’s that massive scourge to deal with again. Our real problem is that a huge chunk of our society (one in seven, according to the Surgeon General) finds living in an un-medicated state intolerable, apparently not really caring whether their minds are altered by depressants (including alcohol), stimulants, or both. That massive demand and the associated profit will assure a steady supply that can’t be stopped, even by admirably trying to contain opiate over-prescribing. 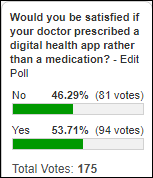 Digital health apps already have challenges with proving their worth, but here’s another problem: half of poll respondents – presumably most of them being health IT experts — wouldn’t be happy at having an app prescribed instead of a medication. Maybe the unstated problem is that the mental picture of a “digital health app” is a patient portal, activity tracker, or record-keeping system instead of an FDA-approved treatment that delivers proven outcomes.

New poll to your right or here, as suggested by a reader: What impact would a job candidate’s CPHIMS credential have on your hiring decision? Long-time readers may remember that I asked this same poll question way back in 2009 and 2010.

Readers weighed in on “What I Wish I’d Known Before … Going to my First HIMSS Conference as an Exhibitor.” This week’s question: what do you wish you’d known before taking a travel-heavy job?

Listening: new from Superchunk, angry protest poetry cloaked in masterfully crafted indie punk-pop. The Chapel Hill, NC band has never lost its relevance or fierce independence, and to my ears, has never sounded better. I saw their frenetic but somehow simultaneously laid back show live awhile back and was most struck by a fan’s shouted request for some non-Superchunk song, with the laughing reply of guitarist Jim Wilbur being, “Mac [McCaughan] won’t sing any lyrics he didn’t write, so that’s not going to happen.” That’s admirable.

From the Allscripts earnings call following mostly good results that were marred by much lighter bookings than analysts expected, sending shares down 7 percent Friday: 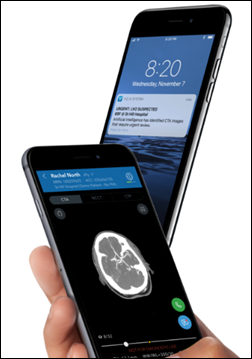 Adventist Health hospitals in California will shift 1,200 IT and revenue cycle employees to Cerner, according to layoff notices filed with the state.

Presence Health (IL) chooses R1 for RCM services and will transfer 1,000 of its employees to the company. 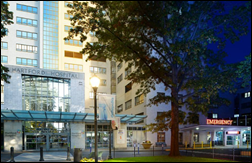 A security researcher reports a SQL injection vulnerability in Epic’s MyChart, also noting that Epic was “quick to respond to contact and patch the vulnerability.” That’s commendable – software vendors rarely behave nicely (and often threateningly) toward strangers who are nice enough to warn them of security flaws in their products. I don’t know how Epic notifies customers and distributes the patch, but I assume it will be quick now that any interested hacker could theoretically exploit it. For non-techies, SQL injection is an old hacker’s method in which they paste an SQL statement into a web page input field – such as name or city – that the web page then executes, giving the hacker access to the underlying database (read, update, delete) without having to pass through the site’s authentication.

The CEO of Medical Center Health (TX) tells the board that its Cerner implementation is one of the organization’s most pressing issues, explaining, “This was an attempt to find an ideal system. That is not a possibility. There is no ideal electronic medical system.” He says he’s worked at hospitals that use Meditech and Epic and those products have the same problems. He says Cerner blamed hospital clinicians and administrators – “pretty much everyone except themselves” – for not implementing the system correctly, but says the hospital and vendor are now working together and Cerner is providing consultants at no charge. The hospital expects the implementation to come in at $47 million, $7 million under budget. 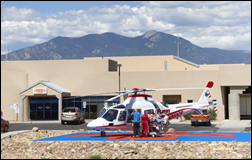 The financially struggling, 47-bed Holy Cross Hospital (NM) says its problems are due to a problematic software rollout, its conversion to a critical access fee structure, Medicaid payment delays, and a lawsuit judgment that raised its malpractice insurance by $600,000. The hospital didn’t name the system, but they started conversion from Meditech Magic to CPSI Evident last fall. The CEO said in his presentation to county commissioners last week that he should have delayed the October 1 go-live, but realized that many of the 100 on-site vendor support staff would be unavailable for a later date. He also says he regrets conducting the critical access switch and EMR conversion nearly simultaneously, but the hospital’s underlying financial problems were in place long before either.

A Miami pediatric surgeon is charged with unlawfully accessing a computer when his former girlfriend finds out that, while they were dating, he logged in thousands of times to the streaming video feed from her in-home security cameras using hospital computers. He says she gave him the password, he was just checking into her well-being, the two cameras were not the bedroom, and she didn’t complain until they broke up and he declined to pay her the $400,000 she demanded.

I like seeing a rare non-stuffy, HIMSS-related vendor press release. Cybersecurity services provider Lunarline says it is “planning for a wild HIMSS 2018,” explaining that, “Our sales team somehow convinced the conference organizers to let us serve beer at our booth. Because, you know, there is never enough alcohol in Vegas.” The company’s website is mostly dry and unremarkable, but a few glimmers of wit shine through.