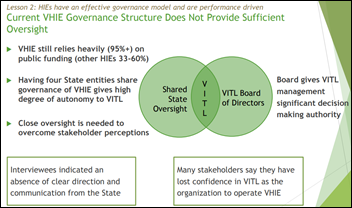 A consulting firm’s review of Vermont’s HIE finds that 91 percent of its stakeholders think the state needs such a service, but VHIE is meeting the needs of only 19 percent of them.

VHIE gets 95 percent of its funding from public sources, which raises a sustainability red flag. It has spent $44 million, most of that provided from federal Meaningful Use funds.

The report says data quality is a problem; VHIE’s “cumbersome” opt-in policy has limited enrollment to 20 percent of the state’s population; and most users have view-only access.

The consulting firm recommends that VHIE: 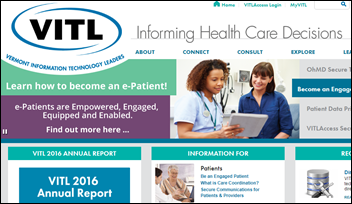 The HIE is run by Burlington-based Vermont Information Technology Leaders, which agreed with the consultant’s findings. John Evans, VITL president and CEO, will retire on January 1, 2018.

From Mordecai: “Re: Renaissance Weekend. I received an invitation – have you heard of it?” I haven’t heard of it. According to its website, Renaissance Weekend  — not to be confused with those goofy Renaissance Faires where historically accurate / BDSM attired attendees frequently exclaim “huzzah” and “good morrow” while they waveth a smoked turkey leg in one hand and cell phone in the other — is an invitation-only retreat of diversely accomplished folks who get together to talk about public policy, innovation, science, and other heady topics. I’m interested in hearing from anyone who has attended or was invited. The idea of going someplace fun for brainy discussions is pretty cool, although interested folks would probably need a connection to be invited and a good supply of extroversion to make it worth going. Maybe there’s something similar with bar lowered for the rest of us. I knew a guy once who convened his own retreat sort of thing, where he invited interesting and diverse people to join him for a day (or maybe it was a weekend) of freewheeling, friendly discussion, although I can see that devolving into a beer bust. 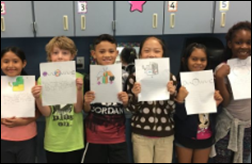 An anonymous reader’s contribution to DonorsChoose, with matching funds applied from my anonymous vendor executive, fully paid for these teacher projects:

I was working early and funded the projects at around 4 a.m., but the apparently also early-rising Mrs. W got in touch almost immediately to say, “WOW! What a wonderful surprise! I can not thank you enough for your generosity! I am so excited to be able to give all of my students the ability to watch and interact with my daily lessons. This document camera will allow my students to be in the moment as I model lessons. This will also help students to be more engaged. Thank you!” 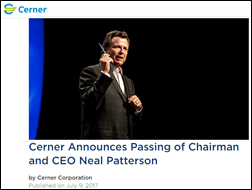 I realized this morning that it has been nearly six months since Neal Patterson died on July 9, at which time Cerner said its longstanding succession plan meant that “the process to select a new CEO is nearing a conclusion.” CFO Marc Naughton said in the October 26 earnings call that the board would “take their time and go through the process in a very careful manner.” Co-founder Cliff Illig remains as chairman and interim CEO. I don’t know how long the average publicly traded company takes to name a permanent CEO, but six months with an interim seems like a long time. 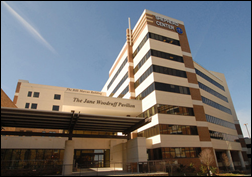 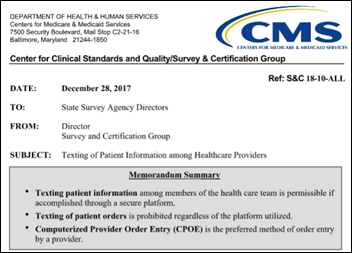 A health law firm says CMS is warning hospitals that they cannot send patient information by text messaging in any form since secure texting systems are unreliable. That seems unlikely other than for using messaging to transmit orders, which Joint Commission has raised as a potential problem because of the inconsistent workflow involved in entering them into EHR. I’ve reached out to CMS for a response. UPDATE: per the response I received from CMS, my suspicions were correct. Texting patient information among healthcare team members remains OK as long as the platform is secure, while texting patient orders is prohibited in all cases.

A ProPublica report finds that CMS has done little to investigate private practice doctors who nearly always bill at the most complex visit rate. One Alabama doctor coded 95 percent of his visits at the highest intensity vs. 5 percent of his peers, for which Medicare paid $450,000. An expert blames EHRs that assign billing codes based on which boxes are checked, saying, “Those programs tend to upcode.”

Systems at Jones Memorial Hospital (NY) go down due to an unspecified cyberattack. Amusing to me is that the hospital is located in Wellsville. 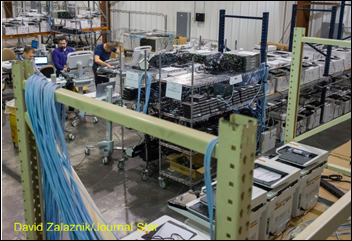 The Peoria, IL newspaper describes the planned February 1 complete IT switchover of two hospitals that OSF HealthCare has acquired, which the IT team hopes to complete in just the seven hours between the 12:01 a.m. agreement effective time and the day shift’s start at 7:00 a.m. The OSF team has staged equipment on rolling carts, practiced assembly and testing, labeled 2,000 cables with their destination, and created training videos for non-technical employees and volunteers who will help with the conversion. CTO James Mormann says OSF is considering using its expertise to spin off a new IT system switching business.

Apple apologizes for intentionally slowing down older IPhones that have diminished battery capacity in an attempt to avoid unexpected shutdowns, offering as a mea culpa a price reduction on batteries for the IPhone 6 or newer from the usual $79 price to $29. The company will also provide a battery health meter in an IOS update in early 2018.

The latest Gallup poll of most ethical professions ranks nurses at the top, with doctors and pharmacists coming in at #4 and #5 even as the honesty ranking of pharmacists fell to its lowest score since 1994. Finishing dead last were members of Congress, car salespeople, and lobbyists.

Only a small fraction of Washington doctors are using the state’s prescription drug monitoring program database, leading one legislator to advocate making their participation mandatory. The state medical association blames standalone PDMP software that doesn’t connect to EHRs. Epic integrates with the state’s system, but only one hospital has turned it on. An expert recommends that the state double the PDMP’s technology budget, integrate the system with EHRs, and pay doctors to use it to avoid resistance to yet another unfunded mandate that takes up their time. 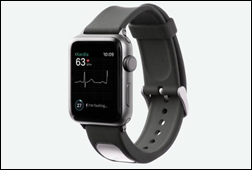 A New York Times article notes the new healthcare possibilities of the latest-generation Apple Watch, which connects directly to cellular networks instead of requiring tethering to an IPhone. It mentions the AliveCor KardiaBand for capturing EKGs, but observes that such devices can flood doctors with questionably useful information that they don’t know where to store. The company has responded by developing a software platform for doctors.

A NEJM op-ed piece questions the psychology behind patients who don’t take their prescribed medications and the role of the Proteus “digital pill” that monitors their medication adherence. The physician author says the problem is rarely caused by patients forgetting to take their meds – despite what they tell their doctor – but rather the psychology in acknowledging their mortality. Some snips:

Understanding takes time, and it’s often easier to tell people what to do than explore why they don’t do it. Even having studied the psychological factors driving non-adherence among patients with coronary disease, I often lapse into check-the-box mode with my patients … For those of us who struggle, the most effective adherence booster may be giving doctors and patients the time to explore the beliefs and attributions informing medication behaviors. These conversations can’t happen in a 15-minute visit. Given how little our health care system seems to value such interactions, it’s no wonder that skepticism often greets these new, unproven, and costly technologies. But though this skepticism may be warranted, it may also reflect a fear that the technology is intended to replace our efforts, rather than facilitate them.

A Froedtert Hospital (WI) anesthesiology resident with a history of depression kills himself on Christmas day by barricading himself in the OR, withdrawing fentanyl from the computerized dispensing system under a patient’s name, and administering it to himself.