Despite appearances, Medhost wasn’t hacked this week, the company says. The cyber intruder penetrated Medhost’s domain registrar (not its actual server or site) and then redirected visitors to a new webpage claiming he or she had stolen patient data. The company did a nice job explaining what happened and getting the site restored as quickly as the propagation of the restored DNS allowed.

Lesson learned for anyone running a website: use a complex domain registrar account password and turn on two-factor authentication if they offer it. I changed mine this morning. 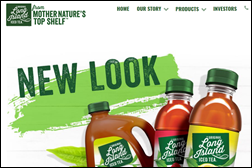 Silicon Valley, meet Bubble 2.0 (and possibly the need for SEC Oversight Part Zillion): the juice manufacturer behind Long Island Iced Tea changes its name to Long Blockchain Corp. even though it admits that it is only beginning to look at blockchain with the vague idea that it might be something cool. The news sent micro-cap shares soaring 200 percent.

A previously dismissed shareholder rights law firm’s securities class action lawsuit against Quality Systems, Inc. is reversed on appeal, with the law firm claiming that Quality Systems/NextGen touted increasing revenue through February 2012, at which time the CEO sold his shares at a high price just before the company lowered guidance and reported lower net income. Above is the QSII share price chart from January 2012 through today, with QSII (dark blue, down 65 percent) vs. the Nasdaq (light blue, up 147 percent). 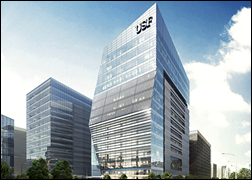 A new KLAS report looks at healthcare management consulting (click the graphic to enlarge).The most-trusted partners of respondents in each consulting firm category (cross-industry, healthcare-specific, focused healthcare-specific) were Deloitte, Premier, and Optum. KLAS hasn’t sent me any report announcements since early 2014, so in checking their site to see how the company has grown, I note that it lists 12 executives and a 24-employee research team.

A newly submitted House bill would allow clearinghouses to sell patient data in a reincarnation of previous bills that were suggested by lobbyists for Experian, The SSI Group, and Availity. Clearinghouses would not be considered HIPAA business associates or covered entities, and like providers that can use patient data without individual consent under the nebulous umbrella of treatment, payment, and operations, would not be required to seek authorization from patients and would be allowed to charge patients for providing copies of their own data. Unlike providers, they would also be allowed to sell data. Hat tip to Politico for turning this up.

The just-passed tax law will affect non-profits that include health systems, hitting them with a 21 percent excise tax on each salary of $1 million or more among their five highest-compensated employees who don’t provide medical services. Also affected will be universities (because of their highly paid presidents and sports coaches) and religious organizations. Given historical health system indifference to high salaries and the enforceability of existing employment contracts, the most likely outcome is that they will just figure out how to bill insurers and patients more to cover their new cost of doing business. 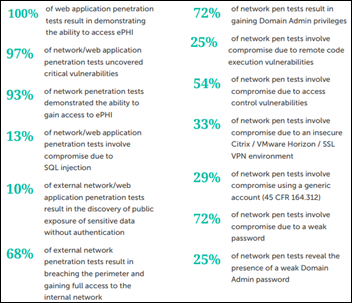 Fortified Health Security’s 2018 cybersecurity report finds that nearly all of its web and network penetration tests allowed access to patient information, while 33 percent of systems could be compromised due to incorrectly configured Citrix, VMware Horizon, and SSL VPNs. A rather shocking 72 percent of networks tested were at risk because of weak passwords. It recommends that organizations: 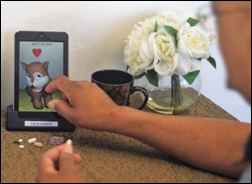 Wired magazine covers CareCoach, a $200 per month human-powered, tablet-presented simulated pet avatar that monitors high-need and elderly patients by checking in, offering medication reminders, and providing a bonding experience. It’s a good idea, although the avatar’s synthesized voice and inherent processing delays are hard to overlook.

Apple finally admits what many IPhone users have suspected – iOS intentionally slows down older iPhones. Not to sell users a newer model, but to prevent the old phones from shutting down because of deteriorating battery capacity. The takeaway: consider replacing your battery to speed your phone back up  instead of spending $1,000 on a replacement.

Bloomberg reports that Apple is developing electrocardiogram capability for its Watch in which wearers will touch two fingers from the opposite hand on the watch’s frame, possibly helping detect arrhythmias. Apple is behind since AliveCor’s Kardiaband add-on band for the Apple Watch is already FDA approved to capture EKGs.

Twitter continues to kill off its only virtue — mandatory brevity — by allowing its users to stitch together a string of tweets. I haven’t seen proportionately more user brilliance in the expansion of the 140-character limit to 280, no different when people who just couldn’t bear to edit their magnificent thoughts started attaching pictures of words that would not have fit otherwise. 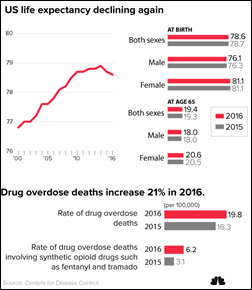 Sixty-three thousand drug overdose deaths in 2016 caused US life expectancy to drop for the second year in a row, the first time that has happened since the early 1960s. 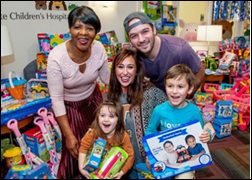 A cafeteria worker at Advocate Trinity Hospital (IL) who says “you don’t have to wait until you get rich to help others” spends $5,000 to buy toys for pediatric patients at Advocate Children’s Hospital. In this tenth year of her project, she will donate half the toys to children in Puerto Rico.

Dilbert, like “The Simpsons,” somehow remains relevant and edgy after many years.