CVS will buy Aetna for $69 billion.

New poll to your right or here, for male readers: do you fear that past incidents could result in a new sexual harassment claim being made against you? The poll is anonymous, as always, and your comments are welcome. Recent headlines triggered me to review my past to make sure I wasn’t forgetting something that could have been misconstrued, leading me to think that others are similarly hoping they surface no repressed memories of previous impropriety.

Next week’s poll will ask women if they’ve experienced work-related sexual harassment or assault. Note: I considered making both of these polls gender-nonspecific, but my assumption is that most of the examples are male-on-female and I didn’t want to dilute the denominator. 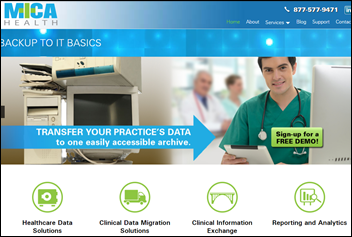 The average healthcare CEO who lost their job due to a merger or acquisition received a golden parachute of $25 million, much less than the $37 million average from a 2015 version of the same report. Dismissed trench warriors presumably were paid basically nothing for being cut loose through no fault of their own even though their need for income was probably much more acute than that of the aristocracy.

Here’s Vince’s look back 30 years at what was going on in health IT in December 1987, when George Michael’s “Faith” topped the charts and “Three Men and a Baby” foretold an epidemic of poor taste.

Weird News Andy titles this article “DNR, R, DNR, EXP.” A 70-year-old diabetic man with “Do Not Resuscitate” (emphasis his) tattooed on his chest shows up at a hospital ED with an elevated blood alcohol level. Doctors considered his tattooed instructions invalid and started an IV, but covered themselves by also conferring with an ethics consultant, who told them they should honor the man’s request. The doctors wrote a DNR order and eventually also located a copy he had filed with the state’s health department. Meanwhile, the man died without further intervention.