A Nuance investor disclosure announcement on Friday says the company has not yet fully restored all of its cloud-based systems that went offline in a June 27 malware attack.

Nuance warns that its financial results for Q3 – of which the malware incident impacted only the final week – will suffer, with expected revenue of $485-489 million instead of the previously estimated $500-$504 million. The company expects to lose $0.11 to $0.09 per share in the quarter instead of its previously estimated loss of $0.07 to $0..05. The Q3 results will be posted on August 8.

Nuance says its Q4 results will also be negatively impacted from the outage, mostly related to its HIM transcription services business. 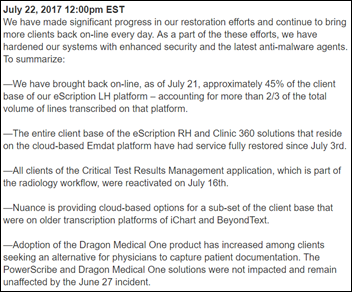 Nuance added that it hopes to restore services within two weeks to all customers of its EScription LH back-end transcription system for large hospitals.

One might speculate that it’s going to be a rough Q4 for Nuance if just one week of Q3 downtime whacked $15 million off the company’s quarterly revenue — the outage on some significant systems has extended three weeks into Q4 and won’t be fully resolved for at least two more weeks.

From Firm Mattress: “Re: your HIT index. I took the liberty of scoring the top 10 of last year’s #HIT100. The low scores seem about right to me.” My scoring method tries to quantify how I assess someone’s healthcare credibility from their LinkedIn profile in looking at healthcare-specific education and accomplishments. I place zero value on social media influence. Twitter is a great way to showcase someone’s deep knowledge and thoughtful opinions (I’m thinking of people like Andy Slavitt and Eric Topol), but it’s also a medium embraced by those with few other accomplishments or possessing light credentials for rendering opinions on complex topics who just retweet stuff other people came up with. My problem with the HIT100 and similar recognition is that some people desperately seek it as validation in the absence of other achievements and brag about winning like it actually means something. To which I would ask in rudely re-introducing the real world into the discussion: how many of Modern Healthcare’s “100 most influential people in healthcare” have followed you, retweeted you, contacted you personally, or offered you a job? You earn cool points, however, for being on the list without ever having mentioned it in pandering for votes or bragging on being named. Feel free to poke holes in my scoring method or the reader’s application of it above. I’m tempted to assign points for military service, particularly in a healthcare or leadership role, since I value that pretty highly in someone’s bio. 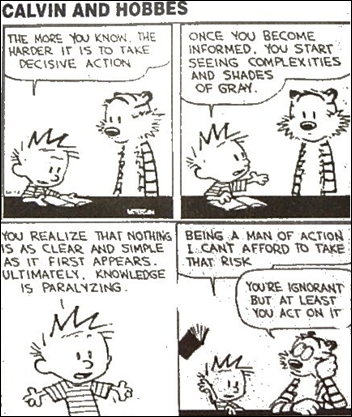 My final thought about self-confidence vs. knowledge and experience applies to all of us  — I’m uncomfortably aware of how well this describes me at times.

From Aphasian: “Re: HIMSS conference. We need a good marketing idea that will generate buzz in Las Vegas.” Obtain a picketing permit from the city and hire pamphlet-passing shills to carry protest signs on the public sidewalk  –your “protest” should involve your product or service.

Poll respondents say the only industry awards that are significant are KLAS and the Davies, but even then, “none of the above” wins the grand prize. Reader Dewey, Cheatham & Howe looks at methodology: “Most Wired is an online form. Completing the form is labor intensive, but not difficult or vetted. If people can (and do) lie about their MU attestations, then what do you think you are getting with Most Wired? KLAS has skilled interviewers and they try to remove bias, but it is easily gamed. HIMSS EMRAM Stage 6 uses same methodology as Most Wired — little to no validation. HIMSS Stage 7 is different because it requires a site visit by experienced surveyors. HIMSS Davies requires a write-up with validation. As for the rest, I assume they are conducted with little or no pre-survey modeling of measurement criteria or post survey review of bias.”

I’ve overseen several “Most Wired” wins in the health systems I’ve worked for, but a comment from the cynical manager I assigned to complete our entry one year best summed up the form’s self-attesting ambiguity: “It’s not what we actually do, it’s how badly you want us to win.” Nobody in IT thought the Most Wired award meant anything at all since the responses allow wiggle room and our job was to support the health system instead of worrying about pointless awards, but we did feel some responsibility after the first win to keep applying. Nobody wants to be the health system that falls off the list – even voluntarily – from one year to the next. Organizations give awards and recipients proudly accept them for entirely self-serving reasons.

New poll to your right or here: which company’s stock would you buy if forced to choose one? 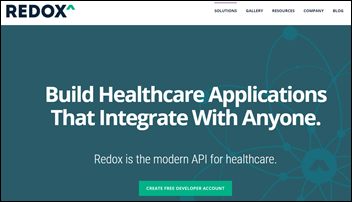 Welcome to new HIStalk Platinum Sponsor Redox. The Madison, WI-based company was founded in 2014 with the belief that EHR vendors can’t solve healthcare interoperability. The company’s API allows innovators the ability to code once, connect to all. It uses cutting edge methods such as HTTPS, JSON, and OAuth to create a modern Web experience without digging into HL7, FHIR, CCD, or DICOM. The company’s integration experts know how to get data into and out of EHRs using scalable integration strategies, enabling both software vendors and providers to integrate their apps, exchange information with affiliates, and commercialize innovation. Redox has already connected hundreds of enterprise applications. It monitors and maintains interfaces 24/7; expedites pilot testing; streamlines referral management, population health, and analytics; and creates a build-once environment that fuels innovation and scalability. The company also integrates wearables and home medical devices with EHRs and data warehouses; connects payors to providers; and integrates remote patient monitoring and telehealth services with medical groups and EHRs. Thanks to Redox for supporting HIStalk. 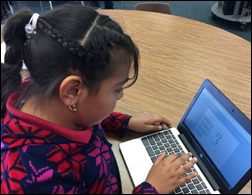 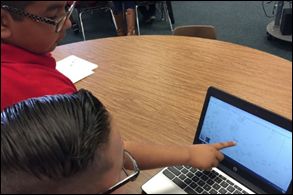 We funded the DonorsChoose teacher grant request of Mr. S in California, who asked for a Chromebook for his second grade class. He reports that the students are using it for online math practice, graphing, virtual field trips, and geography look-ups using Google Maps.

I noted that Nuance’s status updates contain the same infuriating error that I see in endless emails in claiming that a stated time is “EST.” There’s no such thing until November 5, when our clocks are turned back from “EDT,” or if you can’t be bothered to understand what the rest of us get, then just write “ET” and we’ll figure it out for you. The same folks are often confused by time zones and have to confirm for scheduled calls, “What time is it where you are?” to which I’ll provide this invaluable advice: just type “time in Phoenix” or “time in London“ in a Google search box and it will tell you in engaging zero of your brain cells. Daylight Saving Time is illogical, but that doesn’t mean you can just ignore how it works.

This week’s question: What drives you crazy about the person at work who annoys you the most?

From the Athenahealth earnings call, following results that sent shares up 8 percent on Friday: 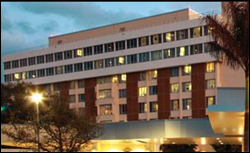 Part 3 of Vince’s HIS-tory of Cerner from a few years back covers how the company’s name was chosen (and by whom), stock performance, and how its lab system became #1 by the late 1980s.