The fund issued its standard language that refers to “operational and strategic opportunities” (often involving selling the company) and expresses its interest in engaging with Athenahealth’s board.

Elliott has pressured other healthcare-related companies to increase shareholder value, most recently The Advisory Board Company and Cognizant.

From Justin Box: “Re: Mary Washington’s video ‘Right Hand Man.’ We’ve reposted it on YouTube.” Justin, who is SVP/CIO of Mary Washington Healthcare (VA), said the hospital initially pulled the unlisted video from YouTube after I mentioned it Tuesday since it was intended to be for an internal audience only, but has since decided to repost the original, unedited version, which is spectacular. The hospital’s marketing people did an amazing job putting it together and the hospital employees who appear in it were fantastic. This would win my HISsies Best Picture award if I had one. Here’s an even more impressive factoid from Justin – President and CEO Mike McDermott, MD, MBA came up with the Hamilton theme idea, wrote the lyrics, and took on the starring role. I’ve watched it at least 10 times so far today. In one of those IMDB-type “goofs,” listen for the Epic product name that is mispronounced. 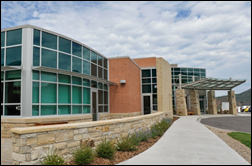 From Aftab: “Re: Aspen Valley Health (CO). A failed Epic implementation caused a loss of millions of dollars and the RIF of dozens of long-term employees. The 20-something IT director brought in an inexperienced team with no healthcare background and farmed out the technical IT jobs to an Indian outsourcing company. There was open revolt from the hospital staff, coupled with the CEO and CIO leaving.” Unverified. The 25-bed hospital signed up for Epic at a cost of $5.4 million in October 2015, affiliating with UCHealth. I reviewed the online video minutes of the hospital’s recent board meetings to look for updates — in the March 2017 session, the board talked about choosing a new EHR from among Cerner, EClinicalWorks, and current vendor Meditech, focusing on a system that is “affordable and accessible to any practice.” The board also wants its own MPI that isn’t shared with another hospital and its own EHR build. The board also noted that Cerner and EClinicalWorks are cloud-based, while Meditech would require 50 hospital servers, but they want to make sure cloud-based systems are ready for prime time. They’ve issued an RFI and hope to be live by 2020. 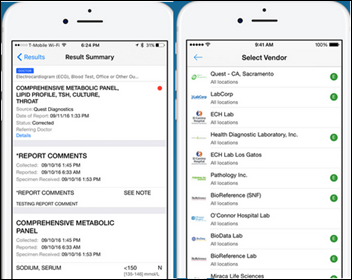 From Publius: “Re: Health Gorilla. Have you heard of them? They’re seemingly a Web-based EMR that supports electronic lab ordering. Is it used by smaller private practices?” I’ve mentioned the company a few times, labeling them as a “medical record aggregator” and secure network that allows sharing records and placing electronic lab orders. Practice price ranges from free to $60 per month. The Silicon Valley-based company – formerly known as Informedika — has raised $4.4 million, none of it recently, and hasn’t issued a press release since October 2015.

From SugerHound: “Re: Apple Watch and glucose monitoring. The rumors are more substantial than are being reported. Chrissy Farr has a great report on CNBC that cites multiple sources.” The article says Apple’s team of biomedical engineers has been developing non-invasive blood glucose sensors for several years in a project originally envisioned by Steve Jobs. They are reportedly conducting feasibility trials and figuring out how to earn FDA approval, which probably won’t come easily or quickly. 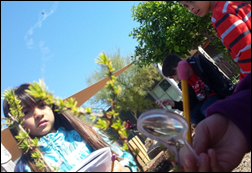 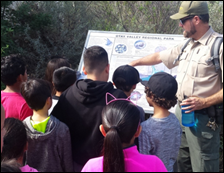 Readers funded the DonorsChoose grant request of Ms. S in California, who asked for non-fiction books for her third graders, with an emphasis on the environment. She reports, “My students and I have become passionate about plants! Not just any plants, but native plants in particular. The chaparral biome which surrounds our school and community is thriving with plant and animal life. Using the books that you so generously donated, my students learned about the environment, and they started a close study of their backyard ecosystem: the chaparral. Caring for the plants and becoming experts of many of the living things in our ecosystem, my students are now serving as stewards for the environment. Without your generous donation, our project would not have been able to take off.”

My “Listening” selection from three weeks ago was the new solo release of Soundgarden and Audioslave front man Chris Cornell. He died by suicide Wednesday night after a Detroit performance of the reunited Soundgarden. His last song on stage was a cover of Led Zeppelin’s “In My Time of Dying.” 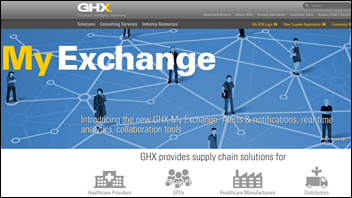 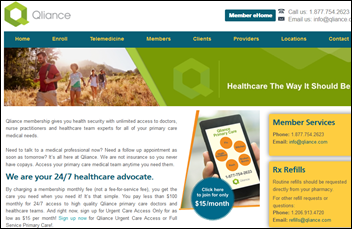 Seattle-based primary care clinic Qliance Medical Management, which had raised $33 million from investors that included Amazon’s Jeff Bezos, shuts down. The two principal officers bought the company in March 2016 from its investors. 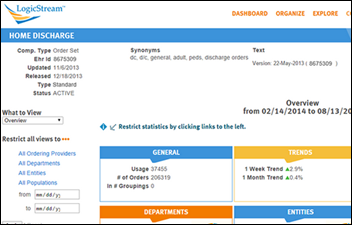 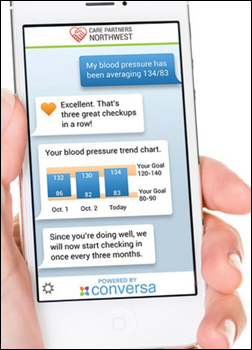 Conversa, which offers doctor-patient conversation programs, raises $8 million in a Series A funding round led by the venture arm of Northwell Health (NY), which will also use the company’s systems. 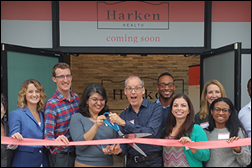 UnitedHealthcare subsidiary Harken Health, launched in 2015 to offer health insurance combined with low co-pay visits in its Atlanta and Chicago health clinics, will shut down after extensive losses.

Amazon is considering entering the pharmacy market, according to reports, which could involve either selling drugs online (which it already does in Japan) or extending its in-house pharmacy benefits management program.

McKesson is basically out of the health IT business (or will be soon), but if anyone still cares, the company announces Q4 results: revenue up 5 percent, EPS $16.76 vs. $1.88, although that includes a pre-tax net gain of $3.9 billion related to the creation of Change Healthcare. MCK shares rose 6 percent in early after-hours trading Thursday, having beaten earnings expectations but falling short on revenue. 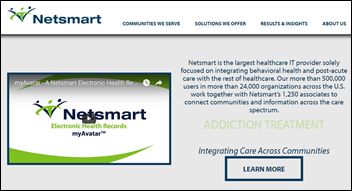 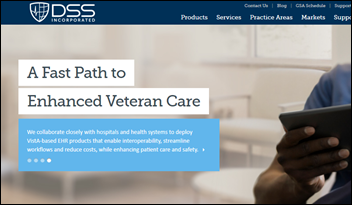 The VA awards Document Storage Systems (DSS) a $19.6 million contract to implement its ForSite2020 patient self-scheduling system that integrates with VistA. DSS acquired the product in December 2016 with its $2 million purchase of Streamline Health’s Looking Glass patient scheduling and surgery management software, which Streamline had previously bought in its February 2014 acquisition of Unibased Systems Architecture. 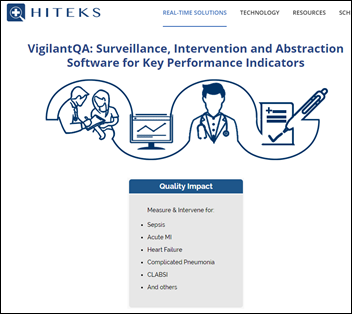 Robert Califf, MD — who served less than a year as FDA commissioner before the administration change — returns to Duke Health as vice chancellor for health data science and will also split time in a leadership role at Alphabet’s Verily Life Sciences, where he will work with turning health-related data into practical applications. Verily, formerly known as Google Life Sciences, has worked on continuous glucose monitors, smart contact lens, retinal imaging, and surgical robotics. 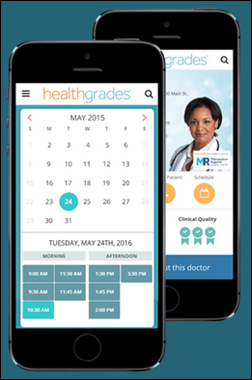 Healthgrades enhances its online scheduling system to allow health systems to display their nearby alternative providers when a given one is booked up. 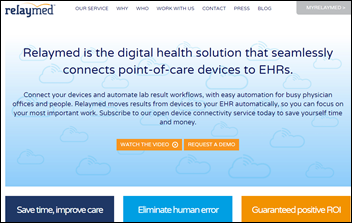 Siemens Healthineers will integrate test results from its HbA1C and urinalysis diagnostic equipment with practice-based EHRs via technology from Scotland-based Relaymed, owned by Goodmark Medical of Longwood, FL.

CHIME announces the finalists in its patient ID technology challenge that will move to the prototype testing round:

The Justice Department files a civil fraud lawsuit against UnitedHealth Group, claiming that the insurer was overpaid at least $1 billion in Medicare Advantage payments after intentionally submitting inaccurate risk adjustment data. UHG says it tried to comply with CMS’s “unclear policies” and adds that the Justice Department either misunderstands or ignores how Medicare Advantage works. 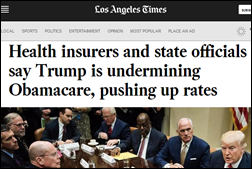 Insurance company executives and state insurance regulators say the ACA insurance marketplaces aren’t collapsing under their own weight, but rather because of the Trump administration’s erratic management, vocal lack of support, and ongoing threats to stop payments, according to an LA Times article. In a remarkably partisan response for a federal department employee, 28-year-old Alleigh Marre — quoted as an HHS spokesperson but self-identified on her LinkedIn profile as a “Republican Communicator,” —  said, “Obamacare has failed. For this reason, Republicans are reforming healthcare so it delivers access to quality, affordable coverage to the American people.” The article also notes that CMS Administrator Seema Verma told insurance company executives that the White House would continue allowing the payment of cost-sharing reductions (premium subsidies, required by law to be paid unless a court rules otherwise) if insurance companies would in turn support the Republican ACA repeal bill, a puzzling offer (even for a near-shakedown political demand) since repeal would do away with the subsidies.

Bronx-Lebanon Hospital Center (NY) and its contractor iHealth send threatening cease-and-desist letters to the author of DataBreaches.net after she let the hospital know that their patient information was exposed due to an improperly configured server, for which the hospital originally thanked her. They claim that the discovery of their apparent screw-up constitutes “hacking,” which happens often when companies are embarrassed and attempt to shoot the messenger. 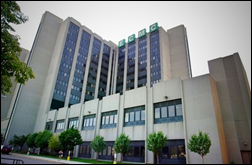 Erie County Medical Center (NY) finally confirms that the April 9 cyberattack from which it is still recovering six weeks later was indeed ransomware, which had been widely speculated. The hospital declined to pay and was forced to move back to paper as its systems were slowly brought back online from backups. They don’t believe it was the WannaCry malware.

Google is applying machine learning to millions of de-identified patient records from major teaching hospitals to see if it can predict an individual’s medical events. 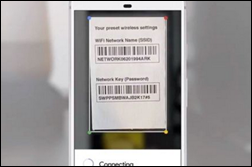 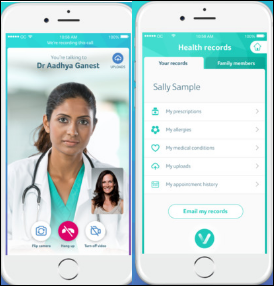 In India, Aetna rolls out the first phase of its global launch of it subscription-based vHealth by Aetna, which offers unlimited PCP visits by video or telephone, diagnostic tests at home, home prescription delivery, and referrals. Patients can rate their doctor experience afterward. 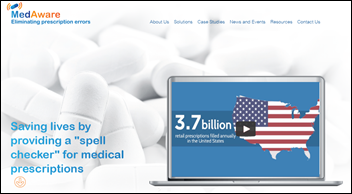 FiercePharma profiles Israel-based MedAware, which uses aggregated prescription data and a patient’s own medical records to predict what drugs are likely to be ordered, improving patient safety in providing what it calls a “spell checker” for prescriptions. The CEO has astutely noted that all of that information is also attractive to drug companies that are interested in targeting their physician prospects, giving it an unexpected yet lucrative market. 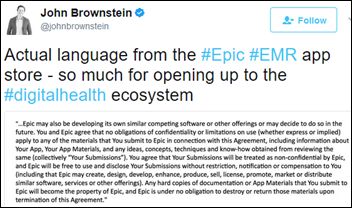 Boston Children’s Chief Innovation Officer John Brownstein weighs in on the language in Epic’s App Orchard agreement, which basically says that Epic can use any of the submitter’s information to develop a competing product and that Epic permanently owns any documentation that the applicant submits. In other words, it’s exactly opposite of the highly restrictive language contained in Epic’s customer contracts. 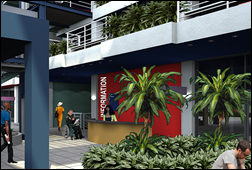 In an interesting twist on medical tourism, a nearly completed medical center in Jamaica plans to lure not only medical tourists to fly there for procedures at discounts of up to 40 percent, but also to recruit American doctors to perform the work while taking a Caribbean vacation. Critics point out that it’s been tried before, failing because doctors are too busy to interrupt their vacations and are not likely covered by their malpractice insurance when doing work outside the country. 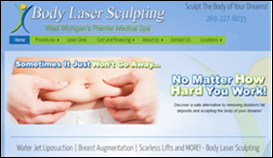 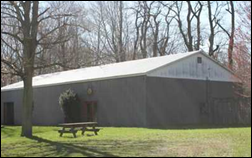 Bizarre: Michigan suspends a DO’s license after a patient complained that her liposuction surgery was performed in an unfinished pole barn, during which the doctor poured her removed fat down a sink drain.