I arrived in Orlando last night, allowing time to get together with some friends for a nice dinner before the craziness of HIMSS begins. We were happy to discover that we can walk back to our hotel from HIStalkapalooza Monday night, no designated driver or surge-priced Uber needed. After a nice walk around the Disney grounds this morning, we headed to the convention center for registration. 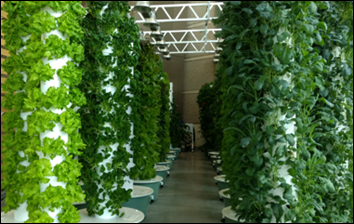 Most people enter the convention center from the International Drive side, which means they miss out on some of the things you can see coming in from the car park in back. The registration lines there were short (although the parking was pricey and hard to find – I hope it’s not a total gong show tomorrow.) In the registration lobby, they have a hydroponic garden growing a variety of lettuce, basil, kale, Swiss chard, and more.

From there, it’s up the escalators to the pedestrian bridge, where you can see the massive loading docks that facilitate arrival of the booths and equipment. 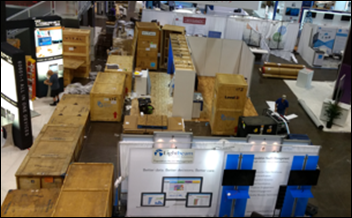 Parts of the exhibit hall were still wall-to-wall crates, even after 1 p.m. Sunday.

I’m traveling with a friend this year who has never been to a HIMSS in Orlando, so we went walkabout so she could get the overall layout of the convention center. It’s definitely got a more streamlined floor plan compared to Las Vegas with its basement booths. We came across the Wellness Pavilion, which consists of a handful of treadmills and elliptical machines. Because nothing says professional like hopping onto a piece of exercise equipment while you’re business casual with your HIMSS tote bag. 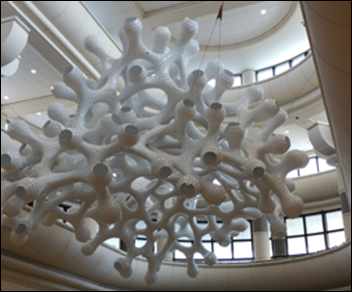 We came across this sculpture outside Hall F, right near the Wellness Pavilion. For those of you with clinical backgrounds, doesn’t it remind you of trabecular bone?

Just about the time I told my friend we’d have to lay bets on how long it would be before I ran into someone I knew, we ran across a friend of mine who built the first clinical data repository at the medical center where I did most of my training. It was good to catch up, but HIMSS is such a busy week that it’s difficult to get more than a couple of minutes with people sometimes.

From there, we headed up I-Drive to grab lunch at the Shake Shack, because sometimes you just need comfort food after you’ve already walked seven miles by mid-day. From there it was a quick swing over to the outlet malls, which were absolutely packed, then back for the HIMSS opening reception. 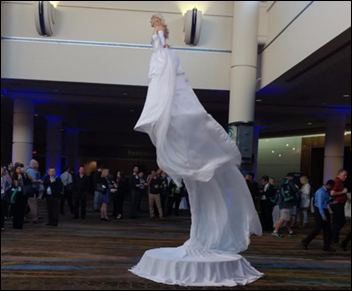 Usually the reception has some themed performers outside to welcome attendees – showgirls in Las Vegas, and last year flappers and gangsters in Chicago. This year there was a performer in the lobby that defies description – or at least defied description until we heard two attendees chatting on the way to the parking garage. One mentioned it was “A woman in a flowy dress on a stick flying through the air.” The other pondered, “Why am I not there?” I don’t know how else to describe it other than what they said, so I’ll let a picture be a thousand words.

The reception seemed to be a step up from previous years, with short drink lines and a good number of food stations. Choices included pad Thai, mini Caesar salads, antipasto cups, paella, and fish tacos. Dessert options included chocolate covered marshmallows and “Dragon’s Breath” popcorn chilled with liquid nitrogen and then served with your choice of toppings. Entertainment included a band with a woman playing some kind of virtual harp instrument that was strung from the stage above the audience, but I couldn’t get a good picture of it.

There were plenty of opportunities to catch up with old friends and meet new ones. The only downsides were the dimness of some parts of the room and there not being enough places to set your drink while you nibbled, but that’s par for the course for events like this. We did work our way into a table of clinical informaticists and met one who works at a hospital in Grand Cayman, so if you’re going to make new friends, that’s the kind of friend to make.

Over the course of the day I walked more than nine miles, so turning in relatively early seemed like a good idea. I definitely need to rest up for HIStalkapalooza.