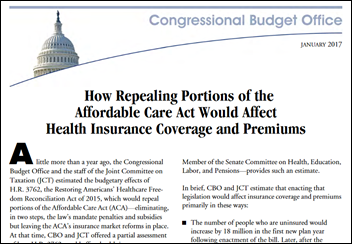 The Congressional Budget Office says that repealing the Affordable Care Act will cause the number of uninsured Americans to jump by 18 million in the first year, swelling their numbers to 32 million in 10 years.

CBO predicts that Insurance premiums for individual policy-holders will increase by 25 percent in the first year following repeal and will double within 10 years.

From James Jones: “Re: Merge Healthcare. The big story is Nancy Koenig leaving, but the positive news is that the reorg relates to growth, not downsizing, and that the first cognitive product will be releases in Q2 2017. Here’s the internal email sent to the team on January 10.” The internal email says that the first cognitive solution release under IBM Watson Health will address aortic stenosis.

From Pilsner: “Re: Santa Rosa Consulting. Deleted all its past tweets.” I contacted the company, who says they cleaned up their Twitter account following the departure of one of their internal marketing folks. The Twitter account will be put into use again following an upcoming rebranding.

From Willie Slicker: “Re: HIStalkapalooza. You should keep doing them – it’s great for HIStalk branding.” I don’t pay much attention to HIStalk branding, but as it stands, what I am paying attention to is the check I’ll have to write to cover the event’s cost beyond what sponsors are graciously underwriting. That has understandably dampened my enthusiasm from throwing further free parties since I have to ante up nearly double what I paid for my last new car a couple of years ago. 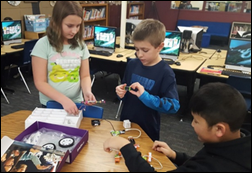 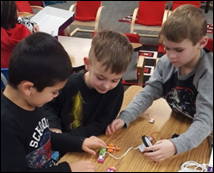 We helped Ms. L from Missouri in funding her DonorsChoose grant request for STEM learning materials. Her fourth graders are building the example electronic circuits and will then move on to creating their own designs.

Listening: new from Kvelertak, face-melting heavy metal from Norway that requires all of my limbs for desk drumming, complete with showy flourishes of my imaginary sticks. Face-melting isn’t for everyone, so there’s this: new from Khalid, a stunningly expressive 18-year-old singer and musical newcomer from El Paso, TX who blends R&B with old-school soul. Mark your calendars for six months from now – Khalid is going to be big. 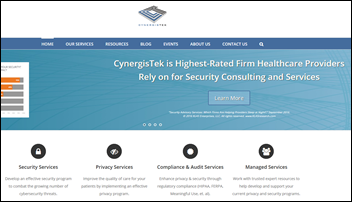 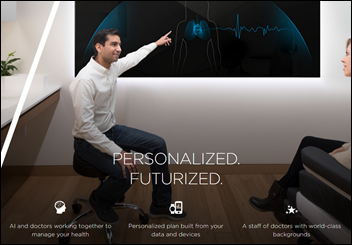 Forbes profiles the just-launched Forward, a San Francisco primary care practice started by a serial entrepreneur who sold his artificial intelligence company to Google. Forward describes itself as looking more like an Apple Store than a doctor’s office. Members who pay $1,800 per year are tested on an AI-powered body scanner, are given a wearable device that the practice says it will monitor, and are sold branded nutritional supplements. We’ll have to take their word on having doctors with “world-class backgrounds” since the company is too enamored with its architecture and apps to say who’s actually delivering the care it offers (maybe it’s just a bunch of hipster docs sitting at a Genius Bar). The track record of millennial-pandering “startups” like this is pretty abysmal, both in terms of financial viability as well as making much of a difference in population health. I’ll be shocked if it’s still around two years from now. 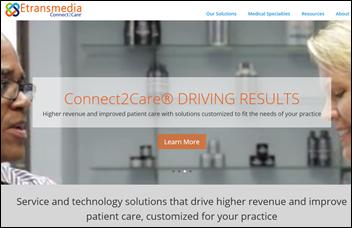 Formativ Health – formed last week by Northwell Health and Pamplona Capital Management – acquires EHR/PM/RCM vendor Etransmedia. It’s probably not relevant, but Northwell – the former North Shore-LIJ – uses Allscripts, which in 2014 lost a $10 million deceptive business practices case to Etransmedia, who bought a bunch of Allscripts MyWay licenses for resale only to get stuck with them when Allscripts abandoned the product. Etransmedia developed and sells the Connect2Care EHR/PM. 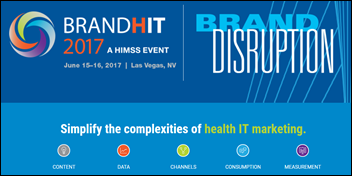 HIMSS further blurs the barely visible line it draws between providers and vendors in launching a marketing summit in Las Vegas, with Steve Lieber saying, “We specialize in supporting organizations who market tech solutions to HIT customers.” At least he’s honest in admitting that what HIMSS does best (and most profitably) is to help HIMSS vendor members sell stuff to HIMSS provider members. Another aspect of that blatantly commercial offering is the apparently new HIMSS Media Lab (referenced but not mentioned in the announcement), whose primary objective seems to be selling ad space in HIMSS publications and relentlessly targeting the provider audience in being “obsessed with getting under their skin, on their mind, into their hearts” as they “study professionals in their natural habitat.” It’s interesting that HIMSS is launching a conference targeting marketing professionals while simultaneously trying to take away their business. Provider-siders who feel like lab rats being studied as they attempt to avoid predators now understand that they’re in the HIMSS version of “The Twilight Zone,” where the seemingly normal small town is not as it seems. We are all just paying acolytes in the HIMSS Church of the Generated Lead.

I found the ethics disclosure form of HHS Secretary nominee Tom Price, MD, who reports holding shares in Athenahealth and McKesson. Meanwhile, Sen. Al Franken and two colleagues ask to have Price’s confirmation hearing postponed pending an ethics investigation after reports that he traded shares of healthcare companies while sponsoring legislation that could have affected their share prices to his benefit.

McKesson will pay $150 million to settle federal charges that it violated the Controlled Substances Act by failing to report pharmacy customers that ordered suspiciously large quantities of oxycodone and hydrocodone. The company will also stop filling controlled substances orders from its distribution centers in four states.

Reuters covers the ways insurance companies are using technology to measure customer behavior and potentially to set premium rates accordingly. Examples: a Bluetooth-enabled toothbrush that phones home to a dental insurance company, car monitoring devices that record driving habits, and fitness trackers whose information is reported back to insurers. Those in favor say the information can change behavior positively, while critics are concerned that the information will be used to charge some customers more or to cherry-pick only lower-risk consumers. 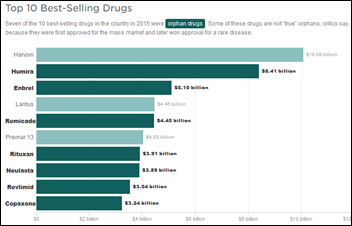 A review of the Orphan Drug Act concludes that drug companies have hijacked the law’s noble intentions (encouraging them to develop drugs for rare conditions) by invoking orphan drug status for mass-marketed drugs to get seven more years exclusive marketing rights. The skyrocketing number of orphan drug approvals includes such bestsellers as Crestor, Ability, Herceptin, and the Humira (the world’s best-selling drug) as companies repeatedly file for protection using new rare conditions. Seven of the 10 best-selling drugs were so-called orphan drugs that earned rare disease approval after the fact. Drug companies are being coached on the process by former FDA officials who have hung out consulting shingles for fees that can approach $100,000, suggesting that the companies employ approaches such as trying out their existing drugs for treating unusual diseases in Africa.

A Johns Hopkins study finds that privately insured patients get stuck with the high bills of out-of-network doctors hired by in-network hospitals, noting that the doctors with the highest markup (defined as the multiple they charge private patients vs. their Medicare rates) are those the patient doesn’t choose. Anesthesiologists, ED doctors, pathologists, and radiologists charge four times the rate Medicare pays them. Anesthesiologists in 10 cities made up the top 2.5 percent. 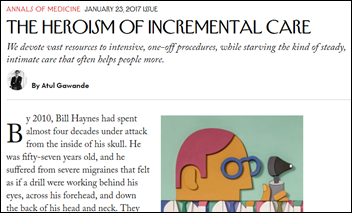 Surgeon-author Atul Gawande, MD admits in a New Yorker article that he has failed to appreciate the role of the primary care physician whose impact on health is less immediately decisive but no less important than the stroke of his well-aimed scalpel. He notes that his OR is equipped with a battalion of people and millions of dollars worth of equipment, while “incrementalists” are lucky to afford a nurse. Some snips:

We will increasingly be able to use smartphones and wearables to continuously monitor our heart rhythm, breathing, sleep, and activity, registering signs of illness as well as the effectiveness and the side effects of treatments. Engineers have proposed bathtub scanners that could track your internal organs for minute changes over time. We can decode our entire genome for less than the cost of an iPad and, increasingly, tune our care to the exact makeup we were born with. Our healthcare system is not designed for this future—or, indeed, for this present. We built it at a time when such capabilities were virtually nonexistent. When illness was experienced as a random catastrophe, and medical discoveries focused on rescue, insurance for unanticipated, episodic needs was what we needed. Hospitals and heroic interventions got the large investments; incrementalists were scanted …But the more capacity we develop to monitor the body and the brain for signs of future breakdown and to correct course along the way—to deliver “precision medicine,” as the lingo goes—the greater the difference health care can make in people’s lives, as well as in reducing future costs. This potential for incremental medicine to improve and save lives, however, is dramatically at odds with our system’s allocation of rewards.