An excellent Black Book survey of 12,000 consumers finds that:

I’m not sure it’s quite the “digital divide” that Black Book calls it, though, since both consumers and providers struggle with technology, aren’t well trained to use it, and worry about breaches (both internal and external). “Divide” suggests some consumers benefit more than others and I’m not sure that’s the case. There’s not a lot of difference between not having the means to use apps vs. not having the interest or confidence to use them.

The most interesting thing about these results is that surveyed consumers nearly always, (a) claim they are in favor of something that sounds innovative, but (b) say their technology fears override everything else (even as they are spewing masses of personal data via Facebook and are willing to provide whatever information companies require to access free games or prizes). In this case, they have nothing positive at all to say about consumer health IT. You would expect similarly low usage of those products, which taxpayers have richly funded.

From Cornichon: “Re: NextGen. Filed an SEC 8-K form giving shares to leadership, many of them vesting only based on the passage of time and not performance. The vesting is accelerated if the company is sold, which has been a topic of speculation for months. The executives also got new change of control benefits for those let go in conjunction with any sale.” CEO Rusty Frantz gets shares worth $850,000 for sticking around for four years plus another potential $472,000 for company performance, plus accelerated vesting if the company sells out. He also gets 150 percent of base salary and bonus, 18 months of health insurance, a pro-rated current year bonus, and outplacement services if he leaves after a sale. The other execs get a similar deal with 100 percent of base salary and bonus. QSII shares have taken a long slide down since mid-2011, now trading at 2005 prices and valuing the company at $840 million. Founder Shelly Razin, who lost his board chair seat in late 2015, holds more than 10 million shares, worth a cool $138 million although that’s a horrifying $358 million less than the same number of shares were worth a handful of years ago. 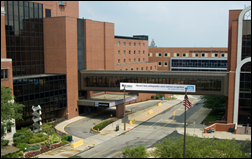 From Retired HIT guy: “Re: Summa Health (OH). It replaced its five-hospital ED staffing on January 1 with a company owned by the husband of Summa’s chief medical officer, with just 36 hours’ notice. Staff wondered how staffing would work given the weeks-long credentialing process and the lack of familiarity with the computer systems used.” The new company apparently realized the challenges facing it since it offered the existing ED  docs a $100,000 incentive bonus and an extra $75 per hour join their company, with no takers. The hospital denies employee reports of long ED wait times and patients leaving without being treated.

From Marketing Slick: “Re: CommonWell. Cerner claims it was a founder of Carequality even though it fought it as a CommonWell competitor. All Cerner did was buy Carequality participant Siemens Health Services.”

From Connective Tissue: “Re: Carequality and CommonWell connecting their systems. I agree it’s the golden spike. Some backstory: Epic and McKesson were in a lawsuit over MyChart, as MCK wanted Epic to use RelayHealth. There was also an Epic concern that CommonWell might create a patient portal that would compete with those of providers. Cerner realized that with the VA deal on the table, they needed to get on board because the government supports Carequality. The question was over who charges who – for example, disability and life insurance companies pay the customer because it saves them paperwork. CommonWell wants to charge fees, but Epic wanted Carequality to be free for patient record exchange involving for care coordination. The agreement was for CommonWell to create a record locator service that they can charge for, while Epic agreed to support it for their interested customers (Surescripts offers the only national locator service – the rest are regional ones offered by HIEs). This agreement is like that of cell carriers in that Carequality and CommonWell can charge only their own customers, not those of the other service, and thus Cerner and Epic can’t charge each other. Since multiple participants are involved, rather than calling it a golden spike between two participants, perhaps the agreement could be better described as the linchpin in the nationwide ATM for healthcare.” A few folks who were involved have told me about the April 1, 2016 meeting that was brokered by Micky Tripathi, CEO of the Massachusetts EHealth Collaborative. There’s also that unverified rumor that Cerner is interested in acquiring RelayHealth, but I don’t have a solid source on that even as MCK sheds its other health IT assets and announces no plans for the best one (Relay).

From Unbalanced Sheet: “Re: R&D accounting. I would be surprised if Epic doesn’t use GAAP accounting like most large companies, but it’s never an apples-to-apples comparison. The question is how much R&D is capitalized and thus ends up on the balance sheet vs. expenses that are flushed through P&L. Aggressive companies like Cerner have capitalized 35 percent or more over the years, which allowed it to report higher earnings than more conservative companies. Management has a great deal of discretion over things like that that go toward quality of earnings.” I read somewhere that software companies must now treat R&D as an expense as it is incurred unless they can prove that the investment has a quantifiable future benefit. For software development, I was thinking that the only opportunity to capitalize R&D is the time between technical feasibility and GA, meaning you have to expense a product’s cost once it is released. However, the definition of “product” and “GA” may be squishy.

Your chance to weigh in: 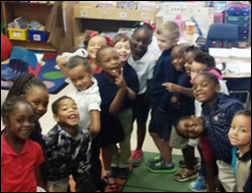 I applied matching money to Vicki’s donation to my DonorsChoose project to fully fund these teacher grant requests: 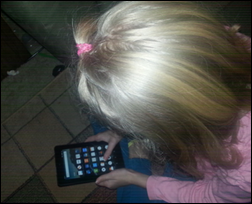 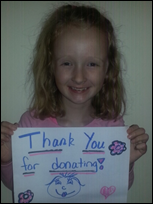 Mrs. M reports that her Virginia students are surrounded by technology that they don’t always get to use because of economic circumstances, adding that the kids have jumped in to create a plan of how they will use the two tablets we provided in funding her DonorsChoose grant request.

Thanks to our HIStalkapalooza sponsors who are graciously making the industry’s most talked-about event possible. I’ll have a write-up on each company leading up to the event, which is less than seven weeks away. 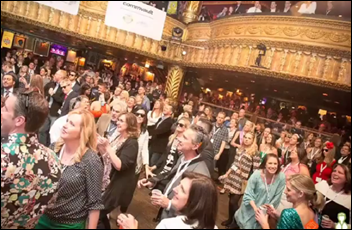 I need another couple of sponsors to hit the break-even point on HIStalkapalooza. Companies that want invitations to give out, recognition, and even to have their CEO welcome guests on the red carpet should contact Lorre. She will get creative in finding something fun — for example, HOB offered the idea of outfitting every server with a tie with a sponsor’s logo. I joked that it should be like Nascar where they wear fire suits plastered with logos, to which our HOB contact responded with a dry, two-syllable ha-ha before moving on to something important like the food options. 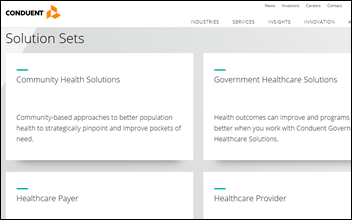 Xerox completes its spinoff of its 93,000-employee business process services company Conduent, whose shares trade on the NYSE as CNDT. 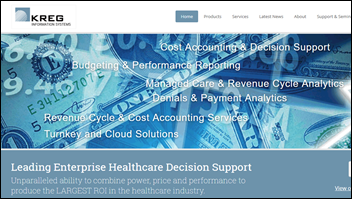 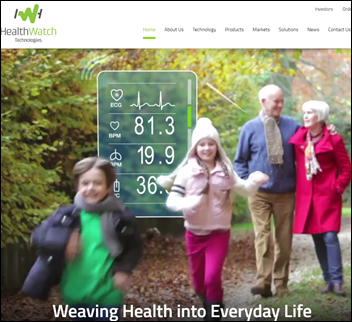 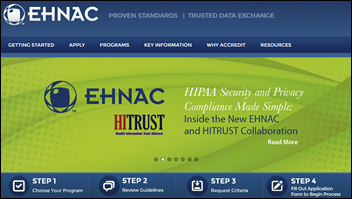 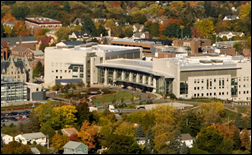 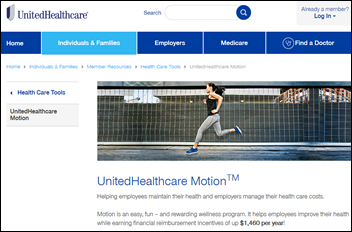 United Healthcare will expand its wearables program to allow employees of some companies for which it provides health insurance to allow their employees to use their own wearables, connected via Qualcomm Life’s 2net connectivity platform. Employees can earn up to $4 day in credits for meeting walking goals involving frequency, intensity, and tenacity.

Senate Republicans introduce an aggressive timeline for dismantling the Affordable Care Act on their promised first day of the new Congressional session. They are using a budget reconciliation resolution that can be passed with a simple majority vote in the Senate (the GOP has 52 seats) vs. the the usual 60-vote legislation approval level. The resolution was introduced by Senator Mike Enzi (R-WY), who says the ACA caused “skyrocketing premiums and soaring deductibles” while driving insurers out of the market.

A New York Times op-ed piece on healthcare cybersecurity co-authored by Eric Topol, MD calls for health systems to stop storing and owning patient health data, instead making patients responsible for storing their own information in the cloud or a digital wallet – possibly using blockchain technology – and deciding for themselves who to share it with. He adds,

We cannot leave it to the health record software companies — the Cerners, Epics and Allscripts of the world — to bring about the needed changes. Their business is to sell proprietary information software to health systems to create large centralized databases for such things as insurance reimbursements and patient care. Their success has relied on an old, paternalistic model in medicine in which the data is generated and owned by doctors and hospitals … Patients have shown an overwhelming willingness to share their information for altruistic reasons (which far exceeds the track record of doctors and health systems when it comes to sharing data). 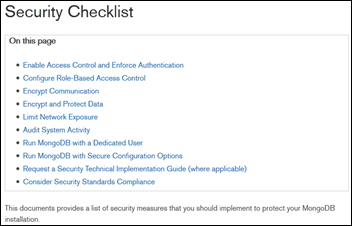 US Special Operations Command in Florida is investigating a claim by security researcher Chris Vickery that he was able to breach the database of a company that provides healthcare workers for one of the group’s programs. Vickery has found several hundred unsecured MongoDB installations, at least some of which have been breached by a hacker with their data held for ransom. A security expert recommends blocking access to port 27017 or limit server access using binding local IPs, then restart the database with the –auth option after assigning user access. The no-SQL MongoDB is used to run big data analytics. 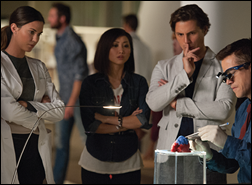 Eric Topol, MD pans the apparently successful “Pure Genius” TV series in which a young technology billionaire creates a hospital that uses cutting edge technology to treat patients that other hospitals can’t help. He not only notes medical mistakes (calling a stroke a heart attack), but questions the show’s premise:

Patients are cured, their lives are saved, or they have dramatic responses to unproven, otherwise unavailable treatments. And in each case Bell, without any medical training or background, makes the critical clinical decisions: “Best idea wins,” he says at the series’ beginning, and they’re usually his. He meets directly with patients and their families, makes extraordinary promises, dresses in scrubs, and uses technology that has never been applied to human beings. When the amnestic police officer does not respond to what the show calls neurostimulation, Bell blurts out, “I’ve always wanted to reprogram someone’s brain” and administers some form of optogenetic intervention that partially restores his memory. The notion that a medically untrained tech billionaire walking around in casual clothes and flip-flops can make life-and-death decisions for people using far-fetched, unchartered therapies is preposterous.

A life insurance company in Japan replaces 34 of its claims adjusters with IBM Watson Explorer, which will analyze hospital records to determine insurance payouts. The company expects the investment to pay for itself in less than two years in replacing employee salaries with much-lower maintenance fees. The article succumbs to the sensationalistic “rise of the robots,” but it is inevitable that companies will replace expensive human labor with technology (both manufacturing and information), which is great for shareholders, at least until the customer base evaporates due to unemployment.

A Texas couple sues Apple after a driver distracted by using FaceTime on the highway caused an accident that killed their 5-year-old daughter. The couple says Apple should have warned users not to FaceTime while driving and should electronically prevent them from doing so (it would be interesting to see how Apple could distinguish a driver from a passenger). 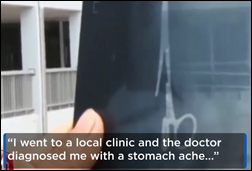 Weird News Andy titles this story “Pean pain paean” (hint: “pean” is a type of surgical forceps). Surgeons in Vietnam remove surgical forceps left in a man’s stomach for 18 years, ironically in the same hospital that apparently left them there in the first place. The hospital only keeps medical records for 15 years, but says it will try to locate the surgical team even if they have retired to let them know they messed up.