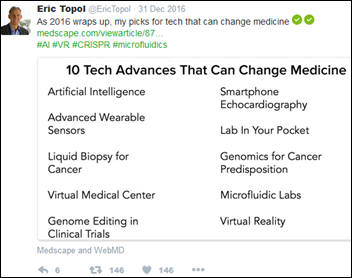 I have to be a quibbler in suggesting that changing “medicine” is far less important than changing “health” – none of these advances would move the needle on the overall health of the US population very much, although listing magic technology bullets makes for sexier reading than advocating exercise, dietary changes, and the other health determinants that drive 90 percent of health and quality of life.

We don’t really need wearable sensors or increasingly sophisticated diagnostic tools to tell us what people could do to improve their health the most, but Topol’s world view is as a cardiologist, technologist, and geneticist rather than that of a frontlines generalist. Telling people to use their own intelligence instead of being overly enamored of the artificial kind doesn’t earn many grants, procedure payments, or technology board seats.

That said, Topol isn’t the only one with the “I have a hammer, so everything looks like a nail” problem. Hospital people mistake their often clumsy episodic interventions as the most important aspect of health.

In both cases, the fact remains that the most significant health decisions are made when people are far away from their providers and the bustling business of healthcare services delivery, often when they are in fact alone. For that reason, maybe health charge should be led by public health marketing people rather than providers whose education and experience causes them to overestimate their importance to health.

From Lucid Moment: “Re: patient privacy. Patients do not realize that they give up their HIPAA rights when they use an app or system that connects to an EHR via an API. CMS requires providers to send patient information to any application that patients want to use. If a patient clicks ‘I agree’ on the usual multi-page terms of whatever app they’re using, the app vendor will gain access to their data under the FTC’s minimal privacy rules rather than HIPAA’s. Google and Microsoft will benefit because they can read patient data for choosing ads to display. That’s always been the case, but new phone access to data such as through the new Apple services opens the pipe for them.” Interesting. The above is from CMS’s November 2016 update on patient access to health information.

From Spoon Bread: “Re: misused words. This article list some good ones.” Indeed it does. Some good examples that I’ve seen:

Poll respondents are slightly negative on using scribes to free doctors up from doing EMR data entry work. Linda is concerned about the wide variability in scribe training and their lack of certification, while Furydelabongo says scribes are like transcriptionists who can create a standardized narrative in the absence of a usable EHR (which he or she says is at least two generations away). Frank says having the most expensive labor unit – doctors – entering data is inefficient, no different than if hospital VPs were required to enter transactions.

New poll to your right or here: Should physicians be held accountable for patient satisfaction survey results? Your thought process would interest the rest of us, so click the Comments link after voting and explain it.

Here’s a last chance to participate: 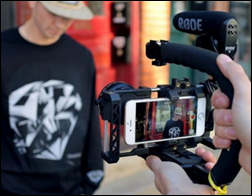 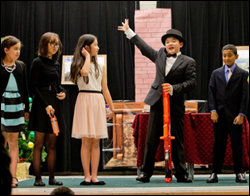 We funded Mr. C’s “Art of Science and Performance” video equipment grant request through DonorsChoose. He checks in from California to say that the class has recorded a school production so that everyone could watch it and will next make a San Jose Tech Challenge film as its keystone project.

I had some final site upgrade work performed over the holiday weekend. Let me know if you see anything that’s not working.

Here’s the 2016 stock performance of some publicly traded health IT companies. It obviously wasn’t a great market year for them, even as the Dow rose 15 percent, the S&P 500 ended up 11 percent, and the Nasdaq increased 10 percent. Cerner shares, for instance, are trading at their March 2013 price, with their longstanding steep climb up having ended in March 2015 even before its July 2015 DoD contract win was announced. 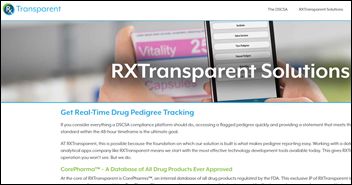 The Philadelphia paper profiles Forerunner Holdings, which offers software that helps hospital pharmacies track prescription drugs through the supply chain to detect counterfeit medications. The company has 50 hospital customers who pay around $5,000 per year to connect with the fulfillment systems of drug wholesalers and manufacturers. The 14-employee company, which is about to launch a $10 million Series A funding round, plans to add a drug shortage warning app and a system to allow hospitals to share access to expensive, rarely used drugs such as antivenin. The company CEO and CTO both came from a Germany-based analytics software vendor and this is their first company.

Fortune magazine profiles investors in “fake it till you make it” startups (of which Theranos is provided as an example) who refuse to believe their companies are doing anything unethical to provide the false appearance of growth. The article ponders whether startup culture has changed now that “the Valley looks as crooked and greedy as the rest of the business world.” The magazine proposes a Startup Scandal Scale that rates companies “on a scale of one to Theranos.” It summarizes,

Some founders grow into talented CEOs. Most don’t. That’s an inevitable by-product of Silicon Valley culture, where everybody fetishizes engineers, designers, and inventors while managers get little respect. “We have an epidemic of bad management,” says Phil Libin, a partner at venture firm General Catalyst. “And that makes [bad] behavior more likely, because people are young, inexperienced, and they haven’t seen the patterns before.” So inexperienced people are handed giant piles of money and told to flout traditions, break rules, and employ magical thinking. What could possibly go wrong? “We hope that entrepreneurs bend the rules but don’t break them,” McClure says. “You know the saying ‘There’s a fine line between genius and insanity’? There’s probably a fine line between entrepreneurship and criminality.” 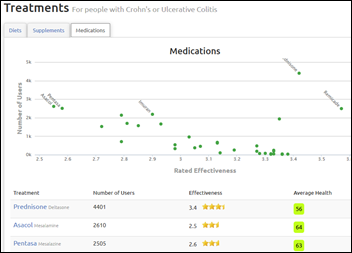 Someone tweeted about Crohnology, a “patient-powered research network” in which people with Crohn’s disease are invited to contribute information about treatments they’ve tried so that the collective experience can be shared with all participants. It’s still in beta testing after several years, but it’s a great idea. 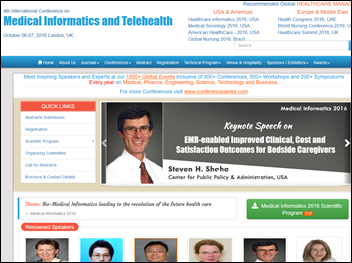 The New York Times profiles the rapidly increasing world of “fake academia,” where shoddily produced but impressive-sounding journals and conferences feed the “publish or perish” needs of academics – many of them from third-world countries – who pay for the privilege of adding substandard articles and presentations to their CVs. An India-based company runs several of its conferences simultaneously from the same hotels in resort destinations; another’s 17 journals are published by one guy sitting in his apartment; and a third company warns prospective authors that its journals don’t accept papers longer than six pages. One journal accepted for publication a professor’s manuscript that contained one sentence: “Get me off your &@$! mailing list.”A company that the FTC has charged with deception offers the 4th International Conference on Biomedical and Health Informatics in Chicago and other informatics conferences, described with sometimes hilariously fractured English and illustrated with badly resized photos.

Bill Gates warns that the misuse of antibiotics has raised the odds of a pandemic spread by resistant bacteria.

Connecticut home care agencies worry that the January 1 implementation of a Medicaid fraud prevention system will cause claims processing problems. The electronic visit verification system requires home care workers to call a centralized telephone number upon entering and leaving the client’s home. The agencies also complain that the state chose as its single vendor Sandata, requiring interfacing and loss of functionality. One agency already has a similar system in place that’s integrated into its EHR, but the change will require workers to go through the verification steps a second time just for the state’s records. An agency with 1,500 Medicaid clients says it won’t use the state’s system and will stop serving those patients if the state insists.