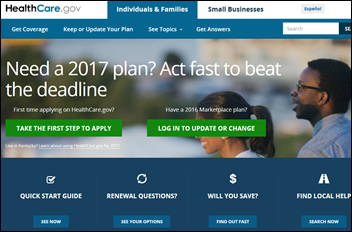 HHS tweaks the Health Insurance Marketplace rules for plan years starting January 1, 2018, assuming it’s still around then (670,000 people signed up on Healthcare.gov last Thursday alone in its busiest day ever). The new rules, most of them addressing risk pools, include: 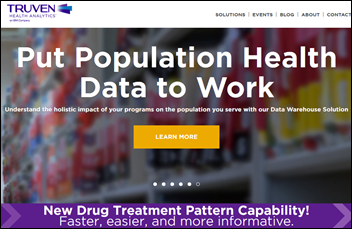 From Truven Watcher: “Re: Truven Health Analytics. Rumor was that new owner IBM was deep-sixing its Unify and Unify ACO population health initiatives, which never got off the ground. The website now shows no references to population health or those products – you get a 404 error. How long before CareEvolution, the engine for several of Truven’s products, goes away too?” Searching Truven’s site for “Unify” brings up links to now-deleted press releases and product pages. IBM acquired the company for $2.6 billion in February 2016 and rolled it into Watson Health, joining its mishmash of puzzlingly unrelated and expensive acquisitions that include Phytel, Explorys, and Merge Healthcare.

From Stock Doc: “Re: Athenahealth. It’s hard to believe that ATHN can sustain the price bump from this week. Upping earnings guidance after a year of misses reeks of desperation to placate the Street.” 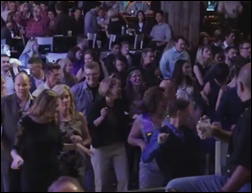 From HIT-A-Go-Go: “Re: HIStalkapalooza. Where is it written that it must be a free event? I’d still go if there was a modest charge.” I’ve thought about requiring those who RSVP to put some financial skin into the game in hopes of reducing the maddening no-show rate of 40-60 percent, but the big challenge is that a modest payment doesn’t have much impact on the overall cost of $150-$200 or more per attendee. The facility’s minimum buy-out and the band’s fixed cost means I can’t really flex it down (I created a horrifically complex Excel worksheet to try to find the sweet spot in telling me how many people I can invite vs. the bar, food, and endless service charges). The amount of financial risk and work makes me yearn for my original vision – a do-it-yourself kind of keg and barbeque party with a marginally skilled but really loud local band blasting away in a vacant parking lot where anyone with a HIMSS conference badge is welcome to attend. Every year I swear I won’t do it again because it’s too much to manage, but then I see how much fun people have and I soften up.

Half of poll respondents expect their overall 2017 health spending to be modestly more than in 2016, while 29 percent say they’ll probably spend a lot more next year.

New poll to your right or here: Which inpatient EHR vendor seemed to gain the most ground in 2016? Your answer will be subjective, but that’s OK since perception is often reality in HIT-land. 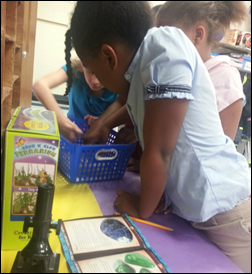 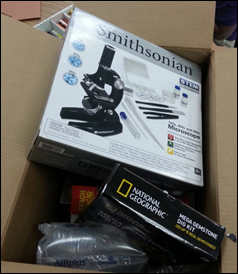 Mrs. M says her Virginia third graders are using the science equipment we provided in funding her DonorsChoose grant request to make real-world connections to what they’re studying. They are working with a gemstone dig kit, a microscope, a terrarium, and a chain reaction kit.

While reading “Between You & Me: Confessions of a Comma Queen” last week, I was grammatically inspired to think about which conversational traits I find most puzzling. Maybe it’s blurting out “Yeah, no” or “No, yeah” in an excited response to a question or statement that the original speaker has barely completed. It’s often young uptalkers who do it, I’ve noted, and who are also prone to beginning sentences with “so.” It’s not so much the usage, but that it’s peculiar to their demographic, maybe due to sloppy phone-texting habits carried over from virtual social situations into real-life ones. I have my own conversational crosses to bear since I drop G’s at the end of words like “talking” due to being raised in a hardscrabble holler so far back that we had to pipe in daylight.

Listening: Blood Ceremony, 1970s-style, prog-influenced “flute-tinged witch rock” from Canada (think Jethro Tull mated with Coven). Singer, flutist, and organist Alia O’Brien is unsurprisingly eloquent and thoughtful given that she’s in her fourth year of her PhD studies in ethnomusicology at the University of Toronto with emphasis on the music of North American Muslims. 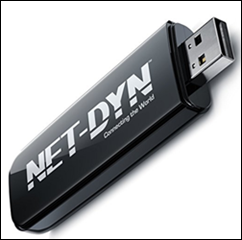 My broadband provider sent a tech out to investigate my connection speed problems, which he apparently resolved by replacing some of the wiring connectors out by the street. He also mentioned that my modem is dual band and thus puts out a faster 5 GHz Wi-Fi signal that my old laptop doesn’t recognize, so it defaults to the slower connection. He suggested I try a USB wireless adapter that supports higher speeds and the $25 Net-Dyn is doing the trick – obviously the broadband provider’s throttle won’t let me greatly exceed the speed I’m paying for, but it’s definitely faster than before.

I’m struggling to believe that it’s just nine weeks until the HIMSS conference, meaning I should get some of my many to-dos out of the way now. I say it every year, but health IT newcomers don’t appreciate the seasonality of the industry in which 75 percent of the year’s work happens between January and April when companies spend a big chunk of their marketing budgets (because of the HIMSS conference), the first financial reports of the calendar year set the tone, and lots of job-hopping and acquisitions take place. 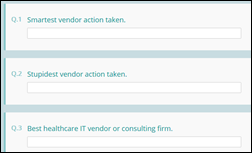 I’ve opened the HISsies nominations. It’s like the presidential elections – skipping the primaries means you lose the right complain about who’s on the final ballot. I’ll email the final voting ballot HIStalk readers who subscribe to my email updates (to avoid ballot box stuffing) in the next couple of weeks.

February 13-17 will be New Sponsor Intro Week on HIStalk, which I just made up. I’ll interview the CEOs of new Platinum sponsors who sign up between now and then during that prime, pre-HIMSS week (a maximum of five). Assuming they say something interesting, perhaps folks will drop by their expensive booths to check things out. Contact Lorre.

It’s not quite time to open up HIStalkapalooza invitation requests (even though I’m getting inquiries regularly), but look for that in the next 2-3 weeks. 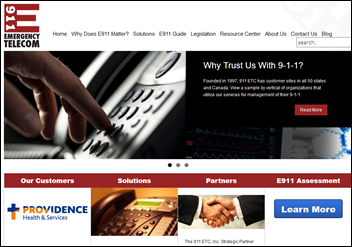 West Corporation acquires 911 ETC — which allows companies to identify the location of 911 callers within their premises — for $10 million in cash.

Henry Heimlich, MD, inventor of the namesake choking intervention, died Saturday at 96. He performed his own technique for the first time earlier this year in saving a fellow senior living resident. 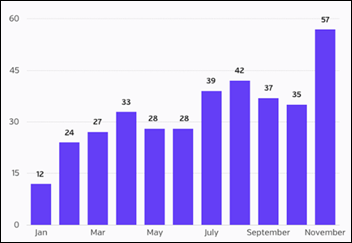 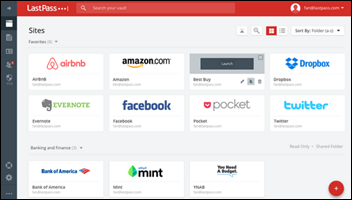 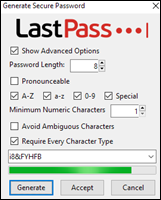 The Yahoo breach provides a reminder that everyone should use a password management program (it also reminds me how superior Yahoo Mail is to the incredibly clunky and frustrating Gmail, having used both for years). I use the free and life-changing LastPass. Benefits: 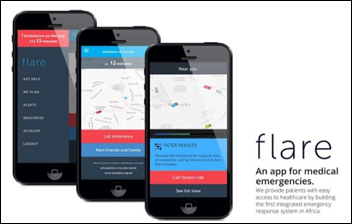 A startup in Kenya is developing Flare, an Uber-like app for summoning an ambulance, hoping to reduce the two-hour delay involved with getting help from private ambulance companies in Nairobi. Users will be able to call an ambulance, stay in contact with the driver, and send their location with directions. 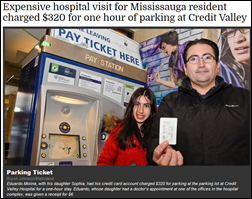 A hospital in Canada blames a parking company’s software bug for charging a visitor’s credit card $320 for one hour of parking instead of the correct $6 shown by his receipt. The hospital is about as consumer friendly as most – it advised the man to fill out a form and wait 4-6 weeks, after which he “may” get a refund check. 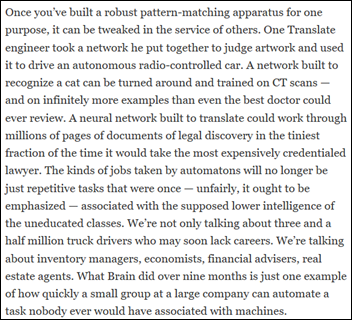 @EricTopol always finds interesting articles to tweet about, including this brilliantly written one in the New York Times Magazine (so good, in fact, that I subscribed to the digital version of the paper for the first time since good journalism and sharp writing is nearly impossible to find – the holiday special is just $98 per year). It describes how Google has rebuilt its popular Translate service to use artificial intelligence — allowing it to provide results much closer to those of human translators — and the rapidly evolving state of AI in general. The article notes that artificial intelligence is built without rules or assumptions and “learns” from what it observes, just like children who learn to speak without studying dictionaries first. It provides the work of radiologists as an example:

Medical diagnosis is one field most immediately, and perhaps unpredictably, threatened by machine learning. Radiologists are extensively trained and extremely well paid, and we think of their skill as one of professional insight — the highest register of thought. In the past year alone, researchers have shown not only that neural networks can find tumors in medical images much earlier than their human counterparts but also that machines can even make such diagnoses from the texts of pathology reports. What radiologists do turns out to be something much closer to predictive pattern-matching than logical analysis. They’re not telling you what caused the cancer; they’re just telling you it’s there.

John Halamka visits Israel with a Massachusetts trade delegation, leaving impressed with the confidence and self-sufficiency of children there (vs. the US, where he says “we’ve become helicopter parents and consider child self-sufficiency a risk”) and the large number of students who participate in military service before going to college. He will create a program for Israel-based companies to pilot their software in Boston. 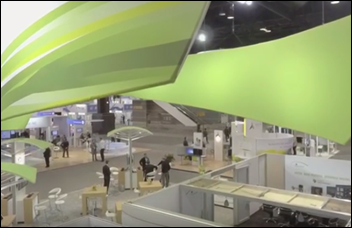 This is pretty cool: Visage Imaging sends up a drone inside the RSNA exhibit hall (before it opens) to provide an unusual perspective of their booth. I wonder if conferences will have to implement no-fly zones to prevent competitor espionage? It’s probably that or an overzealous vendor will shoot down another vendor’s drone and display it proudly in their booth. It would be cool to film HIStalkapalooza from a drone inside the House of Blues, but lawyers would have a field day if it came crashing down on the heads of unsuspecting attendees. 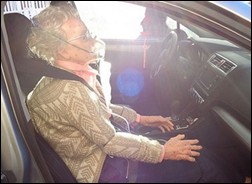 Bizarre: a panicked passer-by calls 911 when she spots what appears to be a elderly woman frozen to death in a car in Hudson, NY (a not-unreasonable assumption since it was only 8 degrees there). Police rush to the scene and smash through the car window hoping to save the woman, who turned out to be the very lifelike CPR dummy of a medical training aids salesman who indignantly explained that he always straps it into the front seat beside him for transport (want to bet he travels solo on highways with an HOV lane?) I’m skeptical of his story because nobody’s CPR dummy is that realistic and dressing them up doesn’t make sense. 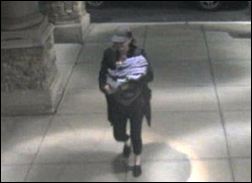 ‘Tis the season: Bethlehem, PA police arrest a local woman for stealing a baby Jesus from a nativity scene and dropping it off at the “safe space” of a hospital with a note signed by “concerned citizens” that said, “Child has a broken right foot which has been neglected. Parents Joseph and Mary Christ got a warning.” The woman says it was a joke, the long-tail humor of which she can contemplate during her court-mandated psychiatric evaluation.