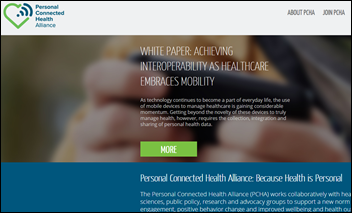 PCHA — formed in 2014 by Continua Health Alliance, mHealth Summit, and HIMSS – merged with the Partners Connected Health Symposium in October 2016. 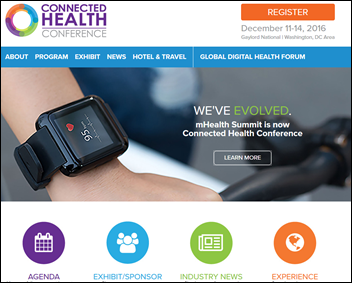 PCHA’s Connected Health Conference, the former mHealth Summit, kicks off today (Monday), but its speaker star power seems to have dropped off considerably since I saw Bill Gates there in 2010. Here’s what I had to say about the mHealth Summit when I attended in 2013, which anyone attending this week’s show is welcome to compare and contrast:

I felt as though I had intruded on a geeky academic conference in 2010 … Presentations back then were often about public health projects in Africa, government informatics research, and government policy … I felt somewhere between virtuous and bored being there. HIMSS, as it usually does, put all of that unsexy and unprofitable subject matter almost out of sight. Now the conference is a freewheeling ode to capitalism showcasing companies willing and able to pay big bucks for space in the exhibit hall and in the endless number of HIMSS-owned publications. The exhibit hall is like a downsized version of that at the HIMSS conference and most of the educational sessions are either about companies or feature vendor people as presenters or moderators … HIMSS seems to be positioning the mHealth Summit as the minor league of its conference portfolio. Most of the small mHealth exhibitors will be toast in a couple of years, but those who survive will graduate to the big show, the HIMSS conference … The same issues dominated this year as in 2010. Nobody’s really sure what mHealth is, basically punting off by saying anything that runs on a smart phone must be, which means the subject matter is entirely unfocused and confusing. Startup companies keep trying to convince each other that they can hang on long enough to be bought out. Everybody fervently believes that mobile apps and brash startup spirit can transform the US healthcare system into one that’s cheaper, more health-focused, and more consumer driven. It’s always easy for me to be cynical and dismissive, but especially so at the mHealth Summit. 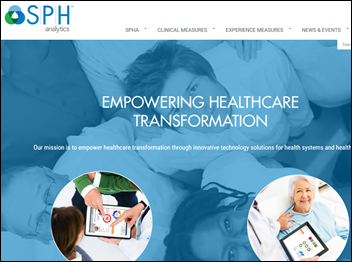 From FlyOnTheWall: “Re: SPH Analytics. President and CEO Al Vega is out and the VPs, SVPs, and enterprise teams are all gone.” Unverified, but Vega’s bio has been expunged from the executive page and four of the eight execs listed on the August 2016 cache of the page are equally invisible. Vega’s apparent replacement, J.T. Treadwell, is a money guy who sits on the board of half a dozen companies. I didn’t recall having heard of SPH Analytics, having mentioned them just twice in HIStalk, once for hiring someone and another for choosing an underlying technology.

From The PACS Designer: “Re: CDI with ICD-10. With the launch next month of ICD-10 Procedure Codes, the increased specificity of ICD-10-PCS Clinical Document Improvement will give procedures much improved descriptions of what treatments a patient has endured. For example, a patient having a two stent insertion procedure would have the following ICD-10 Procedure Coded recorded: 02710D6 Dilation of Coronary Artery, Two Arteries, Bifurcation, with Intraluminal Device, Open Approach. This more specific ICD-10 code replaces 5 ICD-9-CM codes which are 36.03,00.41,00.44,00.46, and 36.06. As one can see, ICD-10 is a big improvement over ICD-9.”

From Smelly James: “Re: IBM. Putting itself at the feet of Donald Trump with several healthcare mentions. It wasn’t shy about suggesting future business interest with the VA. This letter will fit well in future RFP protests.” IBM CEO Ginni Rometty apparently congratulated Trump right after the election, suggesting six areas in which IBM could support his political agenda, including a cognitive computing system for the VA. She also dropped not-so-subtle hints that IBM would appreciate his proposed changes to a “punitive” tax system in which IBM’s $68 billion offshore cash stash would be taxed at a Trump-proposed 10 percent vs. the current rate of 35 percent in bringing it into the US, saving the company (and costing taxpayers) $13.6 billion. 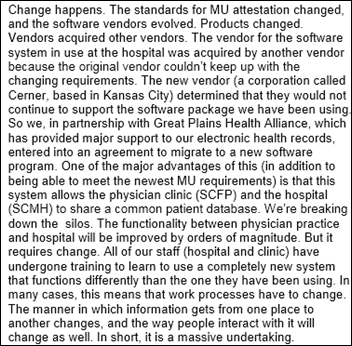 From Rural HIT: “Re: Smith County Memorial Hospital and Family Practice. Went live on Cerner, the first of 25 critical access hospitals in the Great Plains Health Alliance switching to Cerner CommunityWorks.” The internal announcement suggests that the hospital was using Siemens Soarian and was steered to Millennium by its new owner Cerner.

Most poll respondents are interested in the most significant international health IT news stories. Mobile Man says it’s hard to make comparisons since other countries have different payment models, while Susan is interested because we in the US think we have the best healthcare in the world but really we excel only in spending the most. HIT Geek summarizes, “Innovation has no nationality.” New poll to your right or here: how do you expect your healthcare spending (including insurance premiums) to change in 2017 vs. 2016?

Thanks to Jenn for covering my little pre-Christmas break last week. I waded deep into some HIStalk website technology catch-up when I returned, with some tricky upgrades to newer versions of PHP and other stuff that will hopefully make the site more stable and secure.

I was chatting with someone about terrible singers who still have managed to create hugely successful singing careers – the names that came up included Neil Young, Bob Dylan, Willie Nelson, and Rod Stewart. That doesn’t even count those warblers who sound passably good only through audio techno-trickery. One who could carry a tune, though, was Emerson, Lake, and Palmer’s Greg Lake (also of King Crimson), who died last week at 69. We lost two-thirds of ELP in 2016 with the suicide of Keith Emerson, leaving just P and ensuring that their collective demise will be alphabetical. 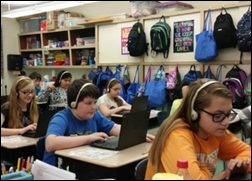 We provided 21 sets of headphones for Ms. S’s elementary school class in Tennessee in funding her DonorsChoose grant request. She teaches math and science to two classes totaling 44 students and says the classroom sounded like an arcade as students used the Chromebooks for assigned exercises, but now it’s quiet and they can concentrate. 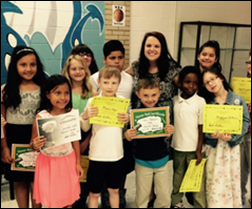 Ms. W sent a note saying, “Your kindness and generosity bring tears to my eyes! I love telling my students how amazing and kind people all over the world donated and funded our projects so we can have fun learning and be successful in the future. Then, I remind them when they have accomplished that to remember to pay it forward. For now they will learn how they can help protect our environment with the tablets!”

Here’s the recording of last week’s webinar titled “Get Ready for Blockchain’s Disruption.” 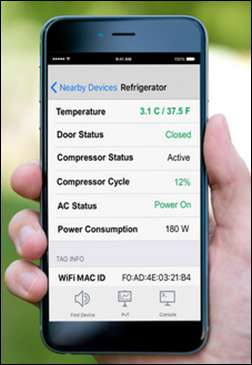 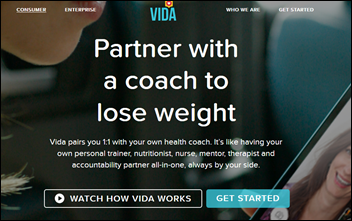 Health coaching app vendor Vida Health raises $18 million in a Series B funding round, increasing its total to $24 million. 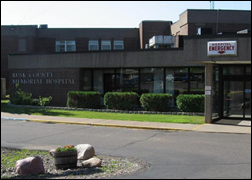 Steve Holmquist, industry long-timer and SVP of new client development at Allscripts, died on November 29, 2016 in Phoenix, AZ. He was 55. 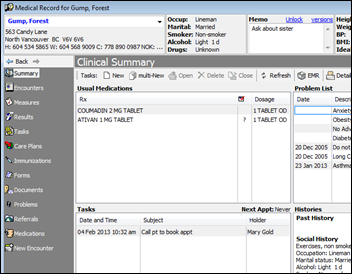 John Halamka summarizes the health IT impact of the 21st Century Cures act. He seems mostly positive, but is concerned about the effort required of EHR developers. His highlights: 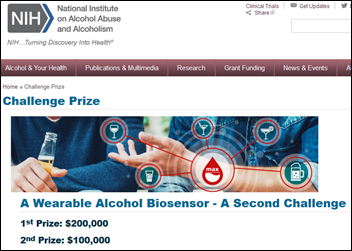 NIH issues a challenge to develop a wearable sensor that can measure blood alcohol levels in real time, offering $200,000 for the first-place prototype and $100,000 for second place. The sensor would help researchers study alcohol use disorder and related conditions without relying on questionably reliable self-reported drinking data.

Fortified Health Security releases a review of 2016’s significant cybersecurity issues and its outlook for 2017. 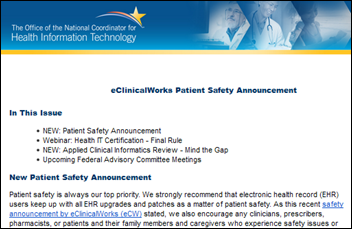 EClinicalWorks issues a curious patient safety announcement about its EHR as part of its “ongoing effort to respond to and minimize such risks,” suggesting that users:

ONC cited ECW’s announcement as the key item in its email newsletter, echoing the company’s recommendation to iECW’s customers that they apply available upgrades and report problems to the company and via ONC’s complaints website. I asked ONC If the announcement was triggered by a settlement with ECW over some unspecified issue and they said no, but the announcement suggests some kind of problem that raised ONC’s interest. 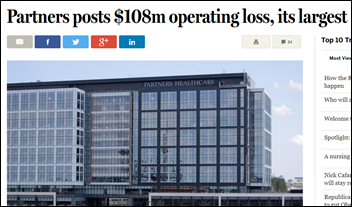 Partners HealthCare posts its largest operating loss ever at $108 million, most of that coming from its Medicaid insurance division. Partners says it isn’t being paid enough by commercial insurers and government programs to cover its labor and drug costs. Including investment performance that must have been awful, Partners lost $249 million in 2016.

India-based media claim that 280 people have died of grief and shock following the December 5 death of Tamil Nadu Chief Minister Jayalalithaa Jayaram, raising the question (at least for me) of how their cause of death was determined. The political party in power says it will compensate their families and will also pay $750 to a party official who set himself on fire and another who cut his finger off in mourning.