The Election Lesson Learned is to be Healthily Skeptical of Analytics

The Election Lesson Learned is to be Healthily Skeptical of Analytics
By Mr. HIStalk 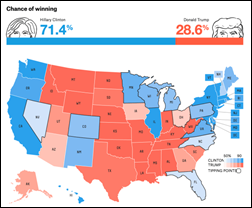 It was a divisive, ugly election more appropriate to a third-world country than the US, but maybe we can all have a Kumbaya-singing moment of unity in agreeing on just one thing – the highly paid and highly regarded pollsters and pundits had no idea what they were talking about. They weren’t any smarter than your brother-in-law whose political beliefs get simpler and louder after one beer too many. The analytics emperors, as we now know, had no clothes.

The experts told us that Donald Trump was not only going to get blown out, but he also would drag the down-ballot candidates with him and most likely destroy the Republican party. Hillary Clinton’s team of quant geeks had it all figured out, telling her to skip campaigning in sure-win states like Wisconsin and instead focus her energy on the swing states. The TV talking heads simultaneously parroted that Clinton had a zillion “pathways to 270” while Trump had just one, an impossible long shot. The actual voting results would be anticlimactic, no more necessary to watch than a football game involving a 28-point underdog.

The (previously) respected poll site 538 pegged Trump’s chances at 28 percent as the polls began to close. Within a handful of hours, they gave him an 84 percent chance of winning. Presumably by Wednesday morning their finely tuned analytics apparatus took into account that Clinton had conceded and raised his chances a bit more, plus or minus their sampling error.

This morning, President-Elect Trump is packing up for the White House and the Republicans still control the Senate. Meanwhile, political pollsters and statisticians are anxiously expunging their election-related activities from their resumes. They had one job to do and they failed spectacularly. Or perhaps more accurately, their faulty analytics were misinterpreted as reality by people who should have known better.

Apparently we didn’t learn anything from the Scottish referendum or Brexit voting. Toddling off to bed early in a statistics-comforted slumber can cause a rude next-day awakening. Those darned humans keep messing up otherwise impressive statistics-powered predictions.

We talk a lot in healthcare about analytics. Being scientists, we’re confident that we can predict and maybe even control the behavior of humans (patients, plan members, and providers) with medical history questionnaires, clinical studies, satisfaction surveys, and carefully constricted insurance risk pools. But the election provides some lessons learned about analytics-powered assumptions.

It’s tempting to hang our healthcare hat on piles of computers running analytics, artificial intelligence, and other binary systems that attempt to dispassionately impose comforting order on the cacophony of human behavior. It’s not so much that it can’t work, it’s that we shouldn’t become complacent about the accuracy and validity of what the computers and their handlers are telling us. We are often individually and collectively as predictable as the analytics experts tell us, but sometimes we’re not.