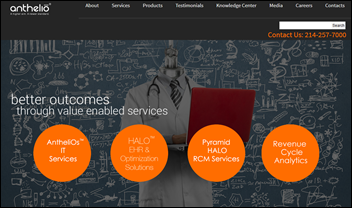 Anthelio CEO Asif Ahmad will stay on to lead the new company’s US healthcare practice. The former PHNS changed its name to Anthelio in early 2011.

The acquisition was accurately reported here on August 12 via a rumor report from HIT Enthusiast that Anthelio did not acknowledge when I inquired. 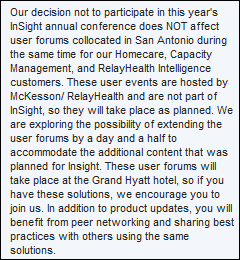 From Tired CIO: “Re: InSight conference. The independent McKesson user group has invited Meditech and Cerner to attend its annual meeting in case someone wants to talk to them about replacing Paragon.” A forwarded email from McKesson says InSight’s board didn’t let the company know until September 7 that it was bringing in Cerner and Meditech as co-sponsors of the user group meeting. The McKesson email adds that having competitors in attendance makes it impossible to share the company’s proprietary information with the group, so it is pulling out of the conference. McKesson adds that it is considering extending its own user forums that run concurrently in San Antonio to include everything it had planned for InSight. It’s also creating its own user group. 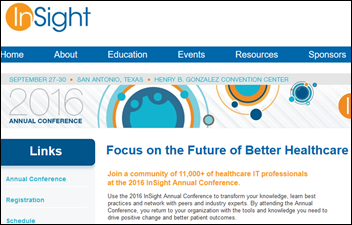 From Mimsey: “Re: InSight conference. McKesson is expected to make an announcement Wednesday about the disposition of its Enterprise Information Solutions, which includes Paragon. Meanwhile, people aren’t happy that the company won’t be presenting at InSight.” At least one attendee says they may just cancel their non-refundable travel since they spend 90 percent of their InSight time attending McKesson-led sessions and workshops and it’s not worth it since McKesson isn’t coming. That person questions why Cerner and Meditech needed to be invited to the conference since they would happily travel to any prospect’s site to do demos without having to meet them at InSight. I have to agree with that attendee – even though McKesson has burned a lot of healthcare IT bridges and is about to leave its customers in a lurch of unknown dimensions, it’s unreasonable to expect McKesson to attend the meeting with its competitors who were invited specifically to pitch to its customers. Attendees got shafted once by McKesson and now by their user group. The InSight board should admit that it made a bad decision and un-invite Cerner and Meditech in trying to make up with McKesson one last time to salvage their conference. I doubt McKesson is really going to create its own UGM since it will be dumping all of the products into the new company formed with Change Healthcare anyway, so nobody will care about McKesson a year from now. Meanwhile, we’ll see what happens the morning of September 28 at the InSight session titled “EIS Roadmap.”

From Startup CEO: “Re: my startup. I would love to get a mention on HIStalk.” OK, here’s your mention, in the form of a list: (a) a one-person consulting company isn’t a startup since ‘startup’ implies impressive investment, momentum, and a team with ambitious goals; (b) you aren’t a real CEO if you’re the only employee; and (c) HIStalk readers won’t care about your company until it hits either $1 million in funding or $5 million in revenue (and maybe not even then).

I was surprised to receive an oddly worded bulk email from Black Book that included screen shots from the “Rating the Ratings” series Vince and Elise did. While I’m happy to be called “the industry’s objective health information systems resource,” let the record show that I wasn’t asked for permission, I didn’t actually rate anyone (Vince and Elise did that), and while I’ve run surveys in the past whose methodology and response rate I was proud of, this one wasn’t one of those – it was informal, not validated, and self-selected. 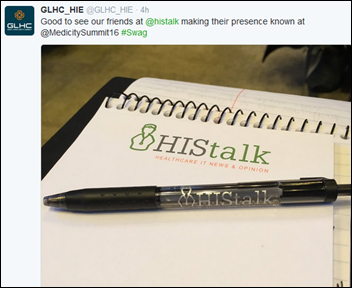 Medicity was the first HIStalk sponsor going back to 2004, so when they asked if I would be willing to return the favor and sponsor their Client Summit being held this week by providing pens and pads, I said sure (I just now realize  the irony of giving digital health attendees old-fashioned pens and paper). I’m always scrounging at the HIMSS conference exhibit hall to get a (rare) notepad to go with the (ubiquitous) pens, so hopefully someone found the matching set useful.

I found this overview of Infor CloudSuite Healthcare on YouTube.

Listening: the impressively remastered  (for the second time) the Beatles “Live at the Hollywood Bowl,” a fascinating audio memento of the band’s 1964 and 1965 concerts there. I’m sure today’s listener can hear the music better than the four lads back then given the insane fan screaming that overcame their primitive audio equipment but is nicely dialed back here. They sound surprisingly talented, warm, and tired but enthusiastic, just the way they should be remembered 50 years after their final August 1966 live performance in San Francisco after conquering the world by their early 20s. Also: new from Madison, WI-based Garbage, whose heavy-with-hooks sound is hard to categorize and equally hard to listen to without desk-drumming. 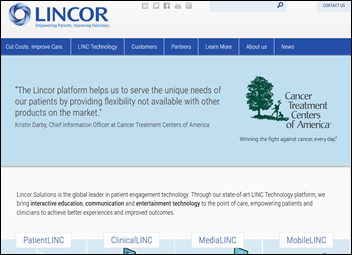 Bedside patient engagement technology vendor Lincor Solutions will merge with its Australia-based distributor to form Lincor Limited, which will be listed on the Australian Securities Exchange. Lincor CEO Chris Cashwell will be CEO of the new company.The Hills Health Solutions business generated $23 million for publicly traded parent company Hills Ltd. in the most recent financial year. 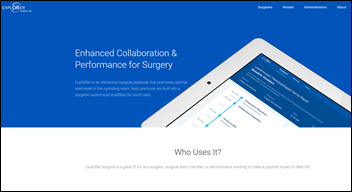 Surgery workflow management technology vendor ExplORer Surgical raises $1 million in a seed funding round. The company’s “surgical playbook” system was developed by University of Chicago, which is among its investors. 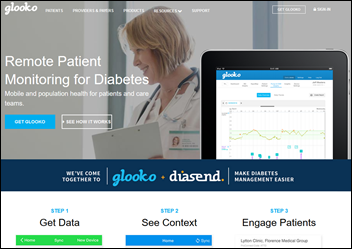 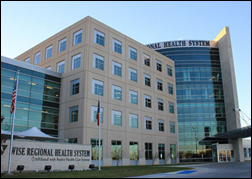 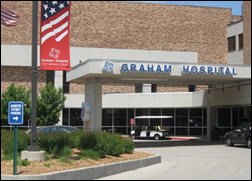 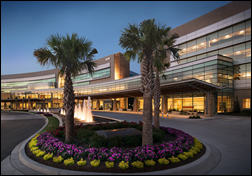 Palmetto Health (SC) will use Glytec’s eGlycemic Management System for the 40 percent of their hospitalized patients who require insulin. The system, which will integrate with Cerner, includes the Glucommander insulin dosing medical device, GlucoSurveillance to flag candidates for insulin therapy, and GlucoMetrics for monitoring key performance indicators. 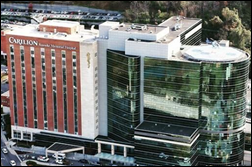 Ingenious Med hires Joe Marabito (IkaSystems) as CEO. He replaces the retiring S. Hart Williford, who will remain board chair.

HIMSS offers to match the 12 just-named NHS digital health Global Exemplars with an international provider partner, which is a condition of the $13 million in funding. The announcement suggests that HIMSS wants to sell its EMRAM and CCMM benchmarking services to the newly funded trusts, which have committed to partner with organizations such as Cleveland Clinic and Mayo Clinic to  take advantage of their expertise. 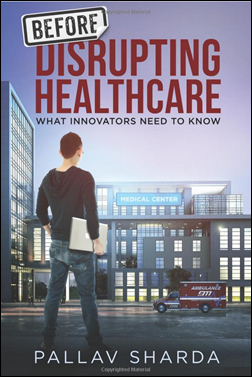 ONC says 95 percent of US hospitals allow patients to view their information electronically, 87 percent allow them to download it, and 69 percent give patients the ability to view, download, and transmit the information. The information is self-reported by hospitals and therefore suspect based on the understanding of whoever filled out the AHA survey. I doubt that two-thirds of hospitals allow patients to transmit data via the Direct protocol or otherwise and I’m confident that very few patients have done so regardless. I say from experience that hospitals hold tightly onto the information they think is theirs, not the patient’s, and the HIM department or release-of-information vendors that are stuck in the 1960s guard those gates enthusiastically knowing that HHS OCR’s enforcement is indifferent. 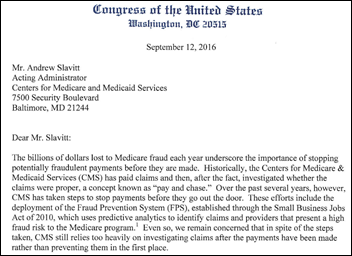 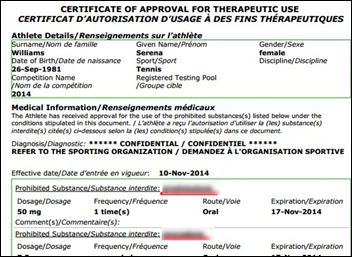 HL7 chooses Bryn Lewis, PhD as the winner of its C-CDA viewer challenge. 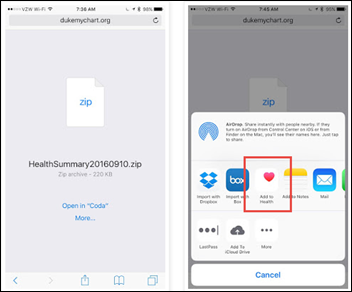 Apple released iOS 10 — which includes C-CDA support via HealthKit — on Tuesday and Duke Health (NC) announces that it will allow patients to download their MyChart portal data into Apple Health, where it can be shared with other apps. 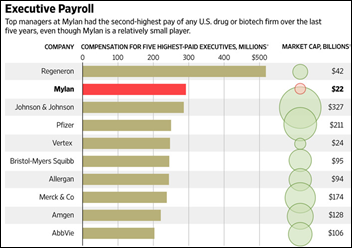 Drug company Mylan, which enraged consumers with its never-ending EpiPen price increases, paid its five top executives $300 million over the past five years, more than competitors several times its size. The company, whose market cap is $22 billion, came in #2 behind Regeneron, which paid its top five executives more than $500 million.

A Health Affairs blog post co-authored by singer Barbra Streisand calls for researchers to include a representative number of women in their studies and to examine their data to see if findings have a gender-specific component. She says as an example that women’s heart disease is different from that of men, yet has not been as well studied or as consistently diagnosed.

BCS, The Chartered Institute for IT interviews Robert Wachter, MD about health IT, particularly that in England.

A reporter for the Tucson newspaper describes his first-hand experience watching Theranos CEO Elizabeth Holmes and the company’s lobbyists schmoozing state officials in convincing them to pass a law that allows consumers to order their own lab tests in Arizona and to allow Theranos to open wellness centers in Phoenix-area Walgreens stores. He summarizes:

This is where Arizona’s leadership fell down on the job: It failed to protect Arizona customers from a company that found the state an easy target in its zeal for deregulation. This wasn’t a company that was seeking tax breaks and incentives, which perhaps made their proposal an easier sale. What they needed was a law that gave them access to Arizona’s people.