Apple cracks down on questionable health app vendors in tightening its App Store Review Guidelines, saying it will increase its scrutiny of apps that provide inaccurate data, will ban marijuana-related apps and sleep apps that require placing the iPhone under a pillow, and will accept drug dose calculation apps only from approved healthcare entities.

Apple also announces that it will start removing outdated and technically obsolete apps from the App Store prior to the rollout of iOS10 this fall. 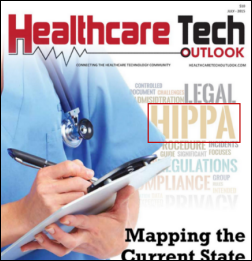 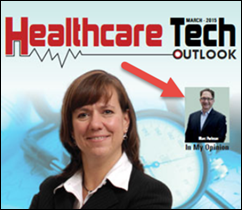 From Mayor McCheese: “Re: Healthcare Tech Outlook. That publication in India that misspelled HIPAA last year is at it again. Our company got the same email saying we’ve been shortlisted to be in the Top 10 list and can be included in their publication for $3,000.” The magazine contains CIO-written vanity pieces, fluff articles that confuse health IT and healthcare technology, and vendor pitches that sometimes misspell the paying company’s name (examples above) and mangle the English language in amusing ways. The magazine, along with CIOReview and others, is published by SiliconIndia, an India-based professional networking site. CIOs must be desperate for an ego stroke to have their work featured there. I also note that  the covers of 17 of the previous 18 magazine issues prominently feature a male subject. The one that highlights a female also includes an inset photo of a male who appears to be peering over her shoulder, the only time they’ve used a second photo on the cover.

From Chiari Malformation: “Re: Epic. Anyone know how Epic will be run post-Judy? She funds a lot of charities that seem to be run by her kids that don’t seem to have significant assets or Epic shares yet. How will these foundations control Epic’s stock to keep the company private? If her kids will be the controlling shareholders, are they qualified to lead the largest medical records company in the country? Maybe this is an academic discussion since there’s no evidence that Judy has followed through on her much-ballyhooed pledge to give away 99 percent of her wealth.”

From Zipty Dudah: “Re: ONC High-Impact Pilot grants. We didn’t hear anything by August 29 notice date. Anybody else?” ONC announced in May that it would fund 3-7 interoperability-related High-Impact Pilots and announce the winners August 29.

From The PACS Designer: “Re: ICD-10 on FHIR. With the coming addition of ICD-10 Procedure Codes to daily clinical use, the next major change to be looking for is the Fast Healthcare Interoperability Resources (FHIR) release. With ICD-10 on FHIR (pun intended) being an upgrade for HL7, we’ll have the opportunity to raise the efficiency level of healthcare practices to a much higher level.”

Insurance companies are the #1 bad guy when it comes to high healthcare costs, according to responses to my poll, with providers and patients earning little of the blame.

New poll to your right or here: Which organization provided the poorest customer service in your recent personal experience? Mine is a new PCP who I haven’t even seen yet. It’s a one-doc practice and it took forever to get an appointment; I showed up and filled out a mountain of paperwork only to be told by the front desk people that the doctor was out for the day and they should have let me know before I drove in. I came back a week later to see the NP (the only rescheduled appointment I could get) and they had lost the mountain of completed paperwork and I had to scale it again. Maybe worst of all I found out later that the awful front office people weren’t even relaying my questions or needs to the doctor when I called. The doc said later that her office people – all young, inexperienced, and unmotivated — are terrible and that I should call just after the 5:00 closing time and she would pick up directly, neatly dodging the question of why she hires and keeps employees who she knows are incompetent and thus puts the burden on me to avoid dealing with them.

This is the last day of my Summer Doldrums Webinar Special, for companies interested in doing a webinar. It’s also HIStalk Pledge Week for new sponsors and they get a deal, too. Contact Lorre. 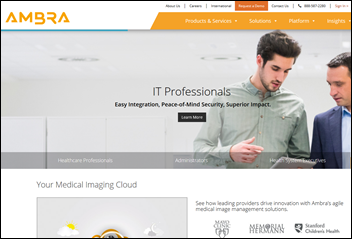 In England, Derriford Hospital is hit with ransomware. The local newspaper notes that 28 NHS trusts have seen ransomware infections.

A hospital employee using a pregnancy tracking app receives a company’s congratulatory card and baby formula samples right before her due date even though she had miscarried months earlier. The app vendor had sold her data to a company that apparently did not notice that she had updated her status as “miscarried.”

IllumiCare wins an Alabama innovation award for its EHR-hovering Smart Ribbon that displays real-time analytics information. It requires no EHR integration and costs $10 per admission for the Pro package that covers observation status, medications, labs, radiation, and cost.

Executives of drugmaker Mylan – which raised the price of EpiPens 15 times over seven years in a 400 percent increase — will earn $77 million in bonuses if they hit share price targets. CEO Heather Bresch, best known before the EpiPen price scandal as the daughter of West Virginia’s then-governor (now senator) who was given an unearned MBA from West Virginia University (later rescinded, after which most of the politically appointed WVU administrators were fired), could see her compensation jump from $13 million to $28 million under the pay-for-performance program that provides ample incentives for robbing patients.

Odd: 40 middle school students are treated and five are hospitalized after eating ghost peppers at lunch on a dare from a classmate who brought them in. “It was really hot. We drank like 10 cartons of milk,” reports one capsaicinized lad, while another had trouble seeing and two vomited up their high-Scoville fruits.

Also odd in an “only in America” sort of way: a man shoots himself in the hand in the dentist’s chair when, under the influence of a nitrous oxide high while getting a filling, he thinks he hears his phone ringing in his pocket but instead whips out his loaded pistol.

Vince and Elise continue their “Rating the Ratings” series with Part 5, which describes the results of my reader survey. I’ll flag their summary with an asterisk in the interests of transparency, however, in noting (as I would hope the ratings firms would do with their surveys) that the sample size was small (74 responses); respondents were self-selected and not validated statistically as being representative; and while I assume the responses were honest, they might not necessarily be correct as evidenced by a couple of comments where the respondent’s memory about specific details might have been fuzzy.