A provocative Atlantic magazine cover this month headlines, “How American Politics Went Insane.” Jonathan Rauch explores our current reality where “chaos has become the new normal — both in campaigns and government itself.”

As we struggle to draw rational signal from the noise, one can’t help but wonder if Trumpian chaos is resident in our favorite podcasts, journals, and websites. Are byzantine rule-makings not regularly bemoaned on HIStalk?  Do we not hear classes of readers singled out (particularly for using HIPPA and HIMMS)? Are we not struck by the rather small hands on the original HIStalk graphic? 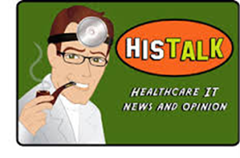 HIStalk has been, all kidding aside, a thankful escape for many of us from a campaign that has been abysmal even by our diminished US standards. Fortunately, there are just 125 or so days left. And with few exceptions, these conversion dates hold.

Here is the quadrennial cheat sheet.

So, with a probable shortfall of just 28 Electoral College votes to get to 270, the Democratic path is far easier. As an indicative example, a Republican could win every “swing” state from Ohio to Virginia, but lose Florida (29 EC) and thereby lose the presidency. It is not quite as challenging as running a health system with an antiquated MUMPS technical architecture, but it is still a daunting task for the GOP.

The statistician-turned-blogger Nate Silver places the odds of a Hillary victory at 80 percent with one of his two models factoring in GDP (Q1 GDP was 1.1 percent) for a lower 75 percent chance. He probably has that about right and (spoiler alert) decisions like the Trump VP pick aren’t going to radically change that.

No matter the outcome at the top of the ticket, neither Democrats nor Republicans are likely to dominate the breadth of the electoral landscape. Republicans have a fairly solid grasp on the US House (247-188) and they also control 31 governorships. As Barron’s wrote over the long weekend, ongoing divided government will offer a muted welcome to any agenda this January.

As for healthcare, the issue significantly trails the economy/jobs and terrorism when it comes to top voter concerns. Moreover, opinions are very settled and polarized. Forty-two percent favor the ACA, while 44 percent oppose it.

Consequently, Clinton and Trump will use talking point level rhetoric, predominately to drive turnout. Hillary will take on big pharma, calling for caps on prescription drug costs. Trump will bemoan premium increases, call for ACA repeal, and assure us he is going to do something “fantastic.” You will feel like you are watching “Saturday Night Live.”

Notably, there is an important piece of emerging voter sentiment that we shouldn’t miss amid the posturing and platitudes. According to the June KFF poll, 90 percent are worried about the amount people pay for their healthcare premiums, while 85 percent are worried about increased cost of deductibles. Consternation over cost is growing and will be reinforced during open enrollment this fall.

As we look out to first 100 days of the new administration, we will see a level of change on health policy that is more incremental than historic. Importantly, MACRA will continue to advance at the agency level, buttressed by solid bipartisan opposition to fee-for-service. At the state level, ongoing programmatic Medicaid changes move forward. Finally, even with the the Cadillac tax delay, employers experiment further with wellness incentives and alternative (and narrower) network design.

In the Atlantic, Jonathan Rauch makes a lonely case for a renewed establishment that can impose some modicum of order. Few will like that treatment plan. His Chaos Syndrome diagnosis, however, is inarguable, as is his view that in the near term, “it will only get worse.”

Donald Trigg is president of Cerner Health Ventures. In a previous life, he worked for President George W. Bush starting on the 2000 presidential campaign in Austin, Texas, and then after a brief Florida detour, in Washington, DC for the first half of Bush’s first term.