My hospital’s “chasing the quality numbers” work is in full swing. This morning I received a five-page packet on how to appropriately document our new tobacco cessation Core Measure.

I’m not sure why it takes that many pages to explain that a) everyone needs to quit using tobacco; and b) we are required to help them do it. What’s worse, the packet didn’t even include instructions on how to do the documentation in the EHR – it was strictly around the philosophy of the core measure.

I pinged the physician who replaced me when I left my leadership position and asked whether they had built the workflow into the EHR. Unfortunately, they haven’t. They didn’t add tobacco cessation medications to the admission orders, nor did they include an easy way to document when you’re not ordering them due to a medical issue. This would seem to be an area that is ripe for order sets and clinical decision support. It wasn’t clear whether timeline or capabilities were the barrier, but either way, it’s a sad commentary on missed opportunities.

Other than that, my visit to the hospital was uneventful. I stopped by the physician lounge to grab a bagel to go. There was some conversation about the pending “star ratings” for hospitals and a recent Washington Post article was being cited. One of the health systems interviewed noted that smaller hospitals that treat less complex patients earned higher ratings than tertiary care centers. According to the article, the preliminary calculations for the stars would result in awarding five stars to only 100 hospitals nationwide. There’s no firm date on when the ratings will be released (it’s been postponed from its July date).

I understand the desire to have some kind of composite rating system for patients to use, but the lack of granularity makes it difficult to truly assess how well a hospital is performing. If I were advising my relatives, I’d recommend they look at specific data for the procedure they were having or the condition for which they were being treated, not an overall “feel good” rating. I’d rather go to a hospital with fewer stars but the top rating for my disease, if I have that choice. When this rating scheme is rolled out at the provider level, as is planned, it will get even more interesting. More to come. 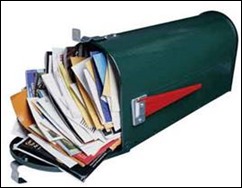 The last couple of weeks, I’ve had an increase in unwanted email volume. It’s not truly spam, but a combination of things that have to be dealt with, even if it’s just by deleting it. The folks who do the email blasts for the Annals of Internal Medicine apparently sent out a test blast of what looked like an online journal notification. It was followed up by an email saying it was a technical error on a test, and that it included “online journal content that was not valid.” Sure, they may take seconds to read, but it adds up throughout the day. I’m also seeing a deluge of LinkedIn requests. Pro tip: If you don’t have a last name, I’m deleting the email without opening it.

Furthering the email overload, this week AMIA migrated to a new online community platform and asked the Clinical Informatics Community of Practice to confirm receipt of the migration by replying to an individual. This resulted in dozens of “reply all” emails and even a request to be removed from the group. Those were pretty easy to sift out, but the last category of unwanted emails is more insidious. I receive quite a few emails each week from different vendors and organizations wanting to partner with me, often on the recommendation of someone I know. They start along the lines of, “I was talking to X the other day and they said we should consider working together” and then range from a general assessment of interest to a, “We’d like to talk to you on Thursday at 2.”

When I think I have colleagues or vendors who might be a good fit, I say something along the lines of, “I work with someone who does X. Would you be interested in seeing if there could be some collaboration?” If they’re interested, I then talk to the other party to see if THEY are interested and if both are amenable, I do an introduction. I don’t ever give out people’s direct contact information and would be horrified if I connected someone who reached out to my contacts and demanded a meeting at a certain time.

I had one of these situations this week and the vendor (which is actually a competitor) emailed me daily asking for meetings at specific times. Apparently they didn’t get the message that when someone ignores a cold-call email, they’re not interested. I’m usually pretty good at taming the email beast, but lately it’s just gotten out of control.

My HIStalk email has also been fairly full of people asking for advice, career coaching, and more. I try to incorporate as much of the advice and coaching into my posts as possible because the topics in question are usually of interest to a broad segment of readers. I’ve had several recent requests, however, where readers want me to review books or papers they’re writing or give advice about specific situations they’re encountering. I’ve had a couple of people get pretty demanding when I said I wasn’t able to accommodate their requests.

I think people forget that HIStalk isn’t my full-time job. I run a consulting company and also see patients I usually write Curbside Consult and EPtalk while I’m on a plane or sitting in an airport. If I’m at home, I’m usually writing it well after midnight. I still enjoy writing it, but some weeks its harder than others to find the time.

How do you keep your email under control? Email me.