We look at the evolution and future of OpenNotes — from the impact it has had on patient engagement, medication adherence, and physician workflows to the technological challenges of implementing a truly vendor-agnostic tool.
By @JennHIStalk 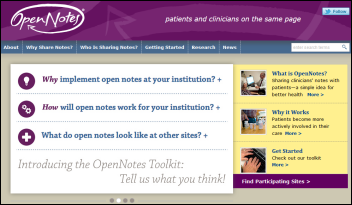 Six years ago, the notion that patients could have electronic access to their doctor’s notes was almost unheard of. The note was a safe, private place where providers could document a clinical encounter without worrying about a patient’s reaction to their accompanying commentary. The note was for internal use only, which no doubt gave providers a certain poetic license to describe patient ailments and mindsets in the bluntest of terms. Enter OpenNotes, now a national movement that encourages providers to adopt open access to clinician notes as a standard practice of care.

The movement began in 2010 as a year-long study funded by the Robert Wood Johnson Foundation that tested the OpenNotes concept with 105 PCPs and over 13,000 patients at Beth Israel Deaconess Medical Center (MA), Geisinger Health System (PA), and Harborview Medical Center (WA). The trial was considered a success, with patients reporting that access to physician notes helped them feel more educated about and in control of their care. They were also more apt to take their medications, share their notes with other caregivers, and communicate and collaborate more with their physicians.

Participating physicians experienced similar positive results, with just a handful reporting longer visits and taking extra time to address patient questions outside of regular visits. While a larger percentage reported taking more time to write notes and change documentation content, none of them stopped providing access once the trial ended.

As RWJF President and CEO Risa Lavizzo-Mourey, MD said at the trial’s conclusion, “The evidence is in. Patients support, use, and benefit from open medical notes. These results are exciting and hold tremendous promise for transforming patient care.”

Since results from the initial OpenNotes trial were published in 2012, the movement has expanded almost exponentially across the country. Twenty-six healthcare organizations — including the VA and most recently Duke Health (NC) — are now providing open-note access to over 6 million patients.

The movement shows no signs of slowing down thanks to an additional $10 million in funding from RWJF, Cambia Health Foundation, Gordon and Betty Moore Foundation, and Peterson Center on Healthcare that will be used to roll out OpenNotes access to 50 million patients across the country.

The investment doesn’t stop there. We Can Do Better, a nonprofit OpenNotes advocacy group that works alongside the NorthWest OpenNotes Consortium, received a grant earlier this year from the Oregon Health Authority Office of Health IT to help spread OpenNotes to small to medium-sized physician practices in Oregon, and to work with healthcare IT vendors on making OpenNotes easy to access via their EHRs and patient portals.

CHIME has also thrown its support behind the initiative, announcing last month its intent to collaborate with the OpenNotes movement on accelerating health data sharing as part of its participation in the Precision Medicine Initiative.

“There is very little funding needed for OpenNotes rollouts,” says Amy Fellows, MPH, executive director at We Can Do Better and an OpenNotes team member. “The main effort is around change management – convincing providers that this is going to be a good thing and something that won’t add to their workload. We hear that OpenNotes is a much easier and smoother rollout process than many previous facility implementations. It really is all about the upfront change management, then ripping the Band-Aid off and getting it turned on. In some cases, a small number of skeptics can delay or moderate an implementation. The issues are cultural, not technical.”

Technical requirements do, of course, need to be taken into consideration. According to Fellows, facilities using Epic and Cerner should be able to easily configure their systems to support OpenNotes. “We attended HIMSS16,” she adds, “and spoke to many other vendors about their capability to offer OpenNotes, including EClinicalWorks, Allscripts, and NextGen.”

Fellows adds that OpenNotes is working to develop a best-practices sheet with recommendations for vendors on how to configure OpenNotes so that it is patient and physician friendly.

Fellows and her OpenNotes colleagues in the Northwest have had ample opportunity to discuss provider best practices at Northwest Open Notes Consortium quarterly meetings. “OpenNotes seems to be an evolutionary process, so even those that have done it come to learn about national efforts bringing it to mental health, inpatient, and other specialties,” she explains. “We know about 1 million patients [in the Northwest] have the ability to access their notes, but it is dependent on each organization’s strategy in promoting their patient portal, and how easy they make it to access the note, i.e. do they send an email tickler inviting patients to access their notes with a link taking them directly to that part of the patient portal after log in?” 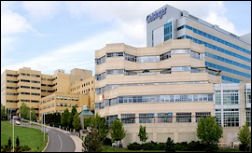 Geisinger, an original OpenNotes trial participant, has expanded its involvement with the program by rolling it out to new physicians as part of best practices. “Right now, we’re looking at 1,700 providers including advanced practitioners and case managers across the system who access OpenNotes as part of their care,” says Rebecca Stametz, senior director of clinical innovation at Geisinger. “Looking at it from mobile utilization, we have gone from 2,005 unique users to about 150,000 with about 550,000 unique hits off of our portal.”

“Since the trial, we’ve rolled it out as a best practice across care settings, with the exception of pockets across our system like psychiatry, maternal-fetal medicine, and EENT,” Stametz says. “We’ve decided to pause on areas where we were unsure of any implications and where we felt we needed to take a deeper look. That being said, new physicians that get on-boarded, especially those in ambulatory, have access to OpenNotes. It’s now part of our care process.”

Serving up OpenNotes to patients is as easy as a visit to Geisinger’s patient portal. “It’s really one of the benefits that [they] have when enrolling with MyGeisinger or our patient portal, both Epic,” she explains. “It’s really about word of mouth – marketing it as a best practice and utilizing it via internal systems. There really isn’t anything to purchase outside of the EHR and maybe a patient portal, which most of the systems who are implementing OpenNotes already utilize.”

Given Geisinger’s track record with OpenNotes, Stametz is well poised to offer what success with OpenNotes means to the organization. “Success means that patients feel more connected to their care,” she explains. “They want OpenNotes. They feel like there’s open communication and they have confidence in their ability to manage their own care. Studying the long-term implications of end users is something that we’re going to begin to tackle now with our national partners.”

Stametz adds that little to no impact on physician workflow is also a part of Geisinger’s definition of success. “We were wondering about disruption to workflow and whether or not people actually utilize those notes if they became open,” she says. “We know that 99 percent of those patients wanted the practice to continue, so there were benefits we didn’t anticipate. We observed that some patients began to gravitate towards physicians that offered note access. I think one of the big things from a Geisinger perspective is that there was little concern or complaints from providers or patients.”

OpenNotes is just beginning to reach a maturity level that will enable researchers to determine its effect on outcomes. Thus far, the only hard data available is a paper published last fall in the Journal of Medical Internet Research that shows patients with open-note access have better blood-pressure control than those who don’t.

Fellows adds that several implementers have evaluated their efforts with surveys similar to the original OpenNotes research surveys. “Patient-reported outcomes have been very similar in each one,” she explains. “All of the implementations we are aware of have gone well with no physician workflow disruptions. Email traffic has been flat, and when made available, portal traffic has increased.” 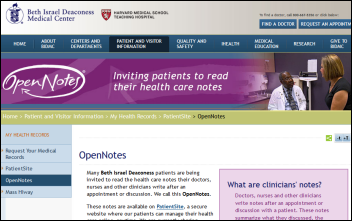 Many OpenNotes participants are venturing into new territory. Several organizations, including BIDMC, have launched mental health pilots to gain a better understanding of how increased transparency could potentially benefit psychiatric care. Vancouver Clinic is exploring the value in allowing adolescents to view their notes with or without parental proxy access. Fellows also foresees eventually rolling out OpenNotes to more vulnerable patient populations, such as non-English speakers, those with health literacy issues, and underserved and safety net populations.

For Geisinger, the next phase of OpenNotes is about expansion and better understanding what patients want to get from its access. “What are the long-term implications for end users who have been using OpenNotes for the past five or six years?” Stametz asks. “We don’t know those answers, but we’re beginning to work with national partners like BIDMC to find out. For example, if patients and family caregivers were able to write their own narrative within the note, what would that do for goal setting, treatment planning, communication, encounter time, etc.? We’re at the tip of the iceberg with the ways we could leverage the impact OpenNotes has had and its potential in other areas.”