The VA is reassessing whether VistA has a long-term place as its EHR and has halted some of its VistA modernization steps following a business case analysis ordered by new VA leadership. The VA says it requested $40 million less in 2017 VistA modernization money because it will focus instead on making its existing systems interoperable.

According to Assistant Secretary for Information and Technology LaVerne Council (photo above), “We want to take a step back and look at what we really need an EHR and a healthcare system to do. There are multiple needs that are different than in 2014 around the area of women’s health, the Internet of Things, and how we manage private sector care.”

House Appropriations Chair Hal Rogers (R-KY) wasn’t happy with the VA’s testimony to the committee, saying, “We’ve been at this for 10 years and we’ve given you billions of dollars. I’m hearing muckety-muck here. I don’t know what you’re saying. Apparently, you’ve not made your mind up yet about whether you’re going to replace VistA with something off the shelf. Is that right or wrong? Yes or no?”

Council replied that the VA hasn’t decided yet, blaming her VA predecessors for not developing a sound plan but extolling the virtues of the VA-DoD Joint Legacy Viewer. She joined the VA in July 2015 after retiring as corporate VP/CIO of Johnson & Johnson.

Council also says that a visual overlay to the VA’s 30-year-old patient scheduling system may eliminate the need for its planned $690 million replacement depending on how the VA-wide rollout in April is received. 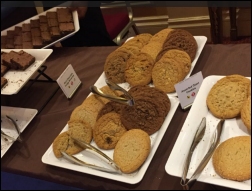 From Vegas Blues: “Re: healthy health conventions. Is it a foregone conclusion that we can’t eat healthy at a Las Vegas conference venue?” Plenty of sugary snacks, fatty sandwiches, and coffee were available, but I didn’t see much fruit or unprocessed food. It’s a fine line between providing what attendees want vs. what’s good for them, however. The H in HIMSS stands for healthcare, not health. It’s like McDonald’s, which offers a lot of healthy food that nobody orders, earning it scorn for the choices its customers make.

From Jardin: “Re: delegating computer tasks to non-physicians. The Senate unanimously passed this because, according to the committee chair, ‘hospitals and providers dread EHRs’ and “MD documentation is burdensome.’ After a year-long review that included HIMSS and physician lobbyists, Congress proposes a solution that adds costs, introduces errors, and eliminates many EHR benefits. After spending billions on health IT, we’re regressing back to the e-secretary model, pushing the burdens of the same EHRs to scribes or RNs. Nurses continue to be invisible in the law. Why isn’t there an industry outcry to actually fix the problem instead of just passing it off?”

From Flaming Introvert: “Re: HIMSS conclusions. As a near-entry level vendor employee, this is my second HIMSS and I’m not sure if I love it or hate it. It’s upbeat and our customers provided positive feedback about our changes and their needs. It’s refreshing to connect with patient advocates, even if most conversations end with the defeatist consensus of, ‘It really sucks, but what can we do about it?” Low point was getting to HIStalkapalooza too late for the shoe judging – I don’t normally parade around in six-inch heels without potential ROI. Maybe that same sentiment applies to HIMSS overall – it continues to yield enough return to induce me to participate, but I’m always glad to get home.” 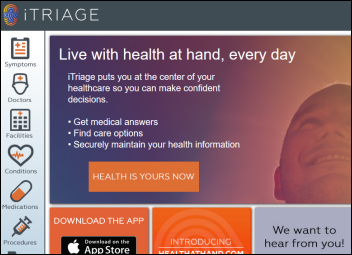 From Bonus Room: “Re: iTriage. Just laid off 33 employees and CTO Patrick Leonard is leaving.” Unverified. I haven’t seen any official announcements from the medical question and doctor finding app vendor that’s owned by Aetna. However, the report came from a non-anonymous iTriage employee.

From Love American Style: “Re: Epic’s 2015 release. I’m a project director for an Epic customer. We are still in the testing phases and the severity and number of patches at this point in the release cycle has been unprecedented. Patient safety problems, patches that break workflows, performance problems all abound. Things I would have expected Epic in prior years to have nipped in the bud long before now.” Unverified. 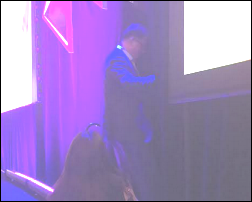 From Delled: “Re: Michael Dell at HIMSS. He’s my hero, but I was stuck in the overflow room for his keynote. The moderator was so bad that people left in droves like the session was over. At one point Dell had to remind the moderator that he was supposed to ask a specific question. Finally I worked my way to the front against the crowd streaming for the exits, and at the end when he was leaving the stage, I asked to shake his hand (photo attached). He ignored me.” Michael Dell would have been an awful choice to keynote even if he wasn’t trying to sell out Dell’s pitiful healthcare offerings so he can finance his $67 billion passion for computer storage in acquiring EMC. EMC owns VMware, which has watched its shares drop 40 percent and has laid off 800 people since Dell came sniffing. Other than funding Dell Medical School, his healthcare accomplishments are zero or less, hoping desperately to sell Perot Systems for the same price he paid in 2009, backpedaling on the the idea that the future is in services rather than hardware.

Here’s my formula for becoming a highly-paid, well-received HIMSS keynote speaker, not inspired by Michael Dell since I didn’t attend any HIMSS keynotes:

A little more than half of poll respondents doubt that Athenahealth and eClinicalWorks will become major inpatient systems vendors. Skeptical says that if eCW’s entry into inpatient is like its interoperability solutions, “we should expect major-league hype and minor-league results.” Vote Early and Often says eCW employees stuffed the ballot box and the company can’t service enterprise customers that expect project discipline and management maturity. Frank Poggio says it’s too late – the market has been sewn up by Cerner and Epic with Meditech, the only small-hospital vendor, losing ground. It’s All Good says there’s a long history of companies aspiring to be what they aren’t (Allscripts) and that eCW should stick to ambulatory.

New poll to your right or here: HIMSS attendees, will the hard-dollar benefit of your attendance cover your employer’s cost to send you within one year? Click the Comments link after voting to explain.

Here’s an extra, reader-requested poll for HIMSS15 exhibitors: in the year that has elapsed since, did you make a sale that you wouldn’t have made had you not exhibited? 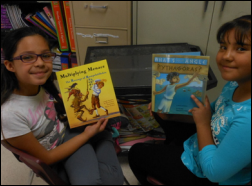 Ms. Livingston says her New Mexico elementary school students “have the idea that they don’t deserve what the schools that have more money enjoy having” and therefore are having great fun with math story books we provided in funding her DonorsChoose grant request. 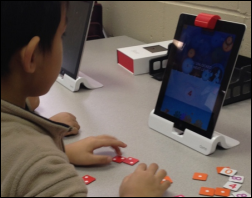 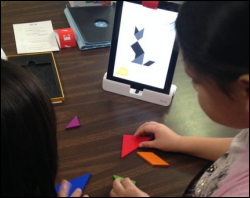 Also checking in was Mrs. Jochum from Nebraska, who sent photos of her students using the Osmo learning systems we provided. 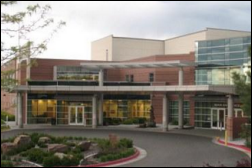 Sixty-nine bed Madison Memorial Hospital (ID) will implement Cerner at a cost of $6 million upfront and $86,000 per month in maintenance fees. They chose Cerner over Epic and their incumbent vendor Meditech. 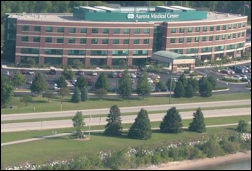 Ross Martin, MD assembled video good wishes for Deloitte’s Chris Brancato, who is recovering from unfortunately eventful spine surgery that has left him hospitalized and therefore unable to attend the HIMSS conference. Some of the greetings were recorded at HIStalkapalooza.

CPSI announces a program by which its revenue cycle customers can apply their additional revenue toward buying its Evident Thrive EHR with no upfront costs. CPSI shares have rallied a bit in the last few months, beating the Nasdaq slightly by increasing 3 percent in the past year.

Intelligent Medical Objects will work with Northwestern University’s medical school to support pharmacogenomics clinical decision support through creation of terminology to support concepts such as “ultra-rapid metabolizer of clopidogrel.” IMO will make the results available to members of the federally funded eMERGE consortium at no cost. 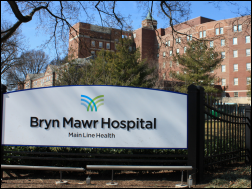 The personal information of all employees of Main Line Health System (PA) is exposed when one of them replies to a spear phishing email.

Mass General’s “Ambulatory Practice of the Future” calls for undergraduate and graduate engineering students to compete for $400,000 in prizes for creating innovations in primary care (technology, instrumentation devices, etc.) Pre-proposals are due April 18, 2016. Ten finalist teams will be awarded $10,000 and the top three winners will receive $150,000, $100,000, and $50,000. Last year’s winner was Hemechip, a point-of-care diagnosis device for sickle cell disease.

The HIMSS16 final attendance count was 41,885, down 3 percent from last year’s 43,129. This is the first time I can recall attendance going down year over year unless maybe it was in 2000 due to the Y2K scare. Possible reasons I came up with: 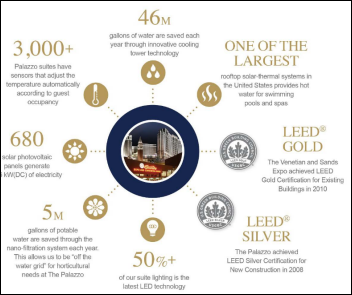 A reader sent a link to the Sands Expo’s brochure describing its “green “ practices conference planning tool that should relieve HIMSS attendees worried about the lack of obvious recycling efforts. Interesting facts from it: 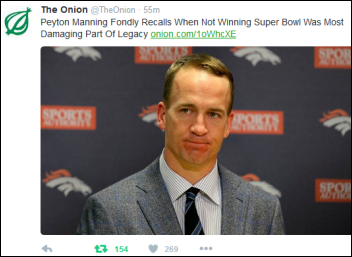 HIMSS barely missed what would have been a huge PR scoop as the Denver Broncos announce that Peyton Manning will retire, just two days after his HIMSS conference keynote.

An 86-year-old woman accidentally strangles herself to death when her medical alert bracelet, which did not have a breakaway clasp, gets tangled in her walker.

Weird News Andy advises people to “Don’t Worry, Don’t Be Happy.” A study finds that joy – along with anger, grief, and fear – can cause emotional stress that contributes to takotsubo (aka broken heart) syndrome.